What is whooping cough? What are the symptoms and complications of the disease? How is the diagnosis and treatment of pertussis? How is pertussis prophylaxis? The answers to these questions can be found in the article.

What is whooping cough

Whooping cough - this is a dangerous infectious
airways disease, which is caused by
specific bacteria Bordetella pertussis
(Pertussis coli, bacillus Bordet-Zhang)., Pathogen
-
small, ovoid, Gram-negative bacilli,
are unstable in the environment. Entrance gate
infection
- Upper respiratory tract, where it vegetates pertussis
wand. It is characterized by acute respiratory catarrh
ways and attacks of spasmodic cough. Congenital
immunity due to maternal antibodies do not
develops. The probability of infection in contact
It is 90%. Very dangerous for children younger than 2 years old.
Since the appearance of the characteristic cough to distinguish
pertussis infections from other hard for one
of the week
infected manage to infect their surroundings.

Most sick children of preschool
age.
The incubation period lasts from 7 to 14 days. Infection
It is going airborne. A patient is contagious from
1
up to 25 days zaboolevaniya. The duration of the infectious period
can be reduced by timely conduct
antibiotic therapy.

Whooping cough is endemic throughout the world. In each
the disease becomes a particular locality
epidemics at intervals of 2-4 years.
About half of the cases occur in children under 2 years.
The first disease usually does not leave natural
immunity for life, but re-infection (if
she is
takes place) proceeds easily and often
recognized.

The disease lasts about 6 weeks
is divided into 3 stages: prodromal (catarrhal)
and paroxysmal stage of recovery.

Starting with the third week begins
paroxysmal period, during which there is
typical spasmodic cough: a series of fast 5-15
cough shock, followed by a short whistling
breath. After a few normal breaths can
Start a new paroxysm. During the paroxysms
released copious amounts of viscous mucous
glassy phlegm (usually infants and young children
her
swallow, but sometimes marked her office in the form of
large bubbles through the nostrils). Characterized by vomiting,
occurs at the end of the attack or vomiting movements,
caused by the discharge of thick mucus. During the attack
coughing patient's face reddens or turning blue; language
protrudes to failure, it is possible trauma
Nizhnik bridle on the edge of the incisors; sometimes there
hemorrhages under the mucous membrane konyunkitivy
eyes.

After the attack the child is tired. In severe
cases, deteriorating general condition.

The number of seizures increased by
During disease. Some children are not attacks
Often, others are up to 50 per day.

In infants, there is no common
whooping cough attacks. Instead they after several
cough shocks may occur short-term
respiratory arrest, which can be dangerous for
life.

Depending on the frequency of cough
attacks and the severity of other symptoms distinguish
mild, moderate and severe forms of pertussis.
Observed and erased forms of pertussis, in which the
spastic nature of the cough is not expressed. This form
observed in children who have received vaccinations, and
at
adults.

Step recovery begins with
the fourth week; paroxysms are not as
frequent and severe, rarely end with vomiting, the patient
It feels better and looks better. Central
disease duration - about 7 weeks (3
weeks to 3 months). Paroxysmal cough may
reappear during neskolkihmesyatsev; as
Typically, it provokes SARS.

Dangerous is a lung disease
(Pneumonia), especially in infancy
(15% probability).

Also, a serious complication
encephalopathy, non-inflammatory changes in the brain
the brain, which may as a result of seizures
cause death or leave behind a persistent
damage, deafness or seizures.

In adults, complications are rare.

The basic method - abjection
(Bacteriological method). On the 1st week of disease
Positive results can be obtained in 95%
patients
4 - 50% only.

The difficulties encountered in identifying
mainly in the form erased. must
differentiated from acute respiratory infections, bronchitis. confirmation
diagnosis of pertussis is a selection of sticks
tracheobronchial secretions; for retrospective
Diagnosis in the later periods of use
serological methods (agglutination, RSK,
RIHA).

Treatment is carried out only small children
in the hospital. Patients provide special conditions -
Chamber should be well ventilated, the air must
be
moistened special humidifiers, air conditioners, or
wet towels. Seriously ill infants
recommended to be placed in a darkened, quiet room and
how can disturb less, as the impact of
external
stimuli may cause severe coughing fit. For
older children with milder forms of the disease bed
mode is required. It is recommended to stay patient
on
outdoors, children outdoors virtually
cough. 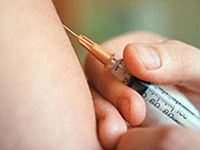 Serious attention should be paid to
nutrition, food is often recommended to give, but small
portions. If you frequently need to introduce severe vomiting
intravenous fluid. For infants is vital
suctioning of mucus from the throat. Of great importance in
whooping cough, especially in young children, with
expressed hypoxia phenomena is widely used
Oxygen therapy (oxygen content in the tent).

Cough and sedatives
should be used with caution or not at all apply,
because the effectiveness of expectorants medicines and drugs,
suppressing cough, lung and sedatives
questionable. Avoid impact,
provoking
cough (mustard, banks).

During cessation of breathing is necessary
clear the airways of mucus through its suction
and perform artificial respiration.

All children from 3 months course is held
vaccination against whooping cough, which consists of 3 injections
DTP vaccine with an interval of 1.5 months. revaccination
make
1.5-2 years after the course of vaccination. Vaccination
70-80% disease prevents or it occurs in
mild form.

patient isolation lasts 30 days
onset of the disease. Children under 7 years of age, the former
at
contact with patients without a history of previous pertussis and
unvaccinated, imposed a quarantine period of 14 days
the moment of patient isolation. If the insulation is not carried out,
this period is extended to 25 days from the day of the disease.
Final disinfection is not performed. All children,
have been in contact with the patient, to be
survey
Carrier.

The contact children under the age of 1 year and
not
grafted administered for the prevention of normal
human
immunoglobulin (measles) to 3 mL of 2 consecutive days.