Learn what may trigger a rare disease - Crohn's disease, what is the mechanism of the disease and complications. Explore the methods of diagnosis and possible treatments. 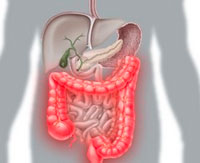 Crohn's disease - is very rare
a disease that can affect the entire gastrointestinal tract, from the mucosa
mouth to the rectal mucosa. Inflammation affects all layers of the intestine,
the disease begins in the ileum, gradually extending to the entire
intestinal tract. Ill can be in the range from 20 to 40 years, sometimes in childhood.
More men are prone to disease. Crohn's disease was discovered 82 years ago.
American gastroenterologist Barille Crone, along with two colleagues
He provided the first description of the medical world on the basis of studies of the disease
medical records of 14 patients.

The disease is difficult to differentiate. Symptoms are similar to
an attack of acute appendicitis, so Crohn's disease often diagnosed at
operating table. It is similar on both ulcerative colitis, lymphoma,
Tuberculosis of the intestine, Meckel's diverticulum, and other diseases.

Direct pathogen medicine, the disease is not known.
Factors contributing to the development of the disease, according to:

The disease can occur in the range from 15 to
35 and after sixty. Most often, it is diagnosed in northerners
Europe and North America.

first
symptoms of Crohn's disease and its clinical manifestations

Symptoms of the disease are multiple and,
but it is affected, usually the intestines. Non-specific granulomatous
inflammation, covering all layers of the intestine, leading to the formation of enough
deep ulcers. They gradually zarubtsovyvayutsya causing narrowing in these areas
intestinal lumen - strictures. The wall of the intestine resembles paving or "cobblestone
the pavement. " There are fistulas and abscesses. Pathological process violates trophism
intestinal tissue by depriving it of essential nutrients, trace elements,
vitamins. Due to the length of the gut inflammation occurs in areas
a metabolic disorder that leads to weight loss, osteoporosis, calculous
cholecystitis, diseases of the kidneys. Symptoms depend on the site
gastrointestinal tract, where localized areas of inflammation, divided into:
general, local and extra-intestinal symptoms of Crohn's disease.

The primary can be a pain in the abdomen, which are not
held for six hours. Common symptoms are characterized by problems with
immunity and symptoms of intoxication: fever, weakness,
nausea, vomiting, dizziness, weight loss, gas in the gut, and chills
general malaise. If the disease is complicated by a purulent inflammation, the
Temperature can be raised to the level of 40 ° C.

Locally there is cramping pain in the
abdomen, usually at the bottom right. It is accompanied by disorders of the chair - visit
toilet possible up to ten times per day, stool with blood. After emptying the pain
subsides.

Additionally, Crohn's disease may cause:

Special diagnostic methods Crohn's disease, giving
full confidence in the diagnosis, no. Standard set of research: clinical and
blood biochemistry, urinalysis, blood sugar, an x-ray with barium and endoscopy
intestine. If possible, a biopsy is taken of the colon mucosa at
colonoscopy. When inflammation of the stomach and duodenum shows
fibrogastroduodenoscopy. The presence of complications of the disease helps to see the US and
CT scan.

how
to treat Crohn's disease

To prevent the development of Crohn's disease is not
it is possible due to a lack of prevention as such. Healthy
lifestyle, good nutrition, enough sleep and rest, less stress and
unrest - that universal prescription for all ills, without exception.