The health conscious people lean onfresh herbs, just hoping to get the benefit. Fruits and vegetables included in the diet of children's institutions, vacationers in the overseas countries taste the strange exotic fruit. However, not always so favorable fruit menu, as might be desired. 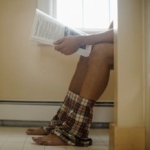 Food intolerance foodfunctional character called irritable bowel syndrome (IBS). Such a diagnosis is approximately 40% of the planet's inhabitants. In fact, IBS - it's a pain and rumbling in the abdomen, bloating, increased gas (flatulence), often headaches, sleep disturbances, feeling of a lump in the throat and as the crown of all, - constipation or diarrhea.

The causes of irritable syndromeintestinal many: stress, excitement, menstrual disorders, obesity, diabetes. It is clear that most digestive problems occur in the warmer months, on the background of abundant eating fresh fruits and vegetables.

By the way, if you doctor has diagnosed"Chronic spastic colitis," that this is not nothing like irritable bowel syndrome. Just the term "irritable bowel syndrome" came into use recently. A detailed endoscopic colon study revealed that in fact no colitis (ie, intestinal mucosal inflammation) in patients not observed. Then the doctors came to the conclusion that the majority of patients have disorders of the nervous regulation of motor function of the intestine.

Experts identify three main optionsirritable bowel syndrome flow: with a predominance of pain and flatulence; with a predominance of regular constipation or, conversely, diarrhea (diarrhea). Of course, all of these symptoms can be "signals" more serious disease of the gastrointestinal tract, such as ulcerative colitis, Crohn's disease and finally malignancy. To exclude all of these serious diseases, it is necessary to conduct a serious examination.

A distinctive feature of irritableintestine - that the above symptoms do not progress, are "at-large" after using the toilet (once it becomes easier). And in general, if the stomach problems are bothering you, a total of more than three months of the year, they can be called a syndrome, if not up to this period - it is believed that this is a temporary inconvenience.

To avoid a not very pleasant moments of communication with"Other white" toilet, follow the simple rules. Do not throw in the fruit and vegetables as if you only have taken out of the besieged city, or do you six months sitting on a strict diet. Do not guzzle up the state "can no longer" all necessary measure. No stomach and intestines will not withstand your excessive gluttony.

Being overseas travel, do not try toto try all the local dishes and exotic fruits and vegetables, because the person gets used to a certain diet, and new foods can be a major stress to the body. Even you do not want to remind about such trivial truths as hand washing fruits and vegetables before eating. This is especially true fans to chew on the move has just bought all kinds of edibles.

To date, irritable syndromebowel treated not only with the help of medicines (by the way, they must appoint a doctor, not a pharmacist at the pharmacy when you ask for "something of Belly"), and psychotherapeutic methods. In addition, treatment should include normalization of the regime and diet (because man is what he eats), and ultimately - increase the patient's self-discipline, getting rid of his depression and hypochondria.

If irritable bowel syndromeaccompanied by diarrhea - need gentle food (cereals, potatoes and other products, where there is little fiber). Ease pain medications, strengthens the vascular wall and mucosa: Ascorutinum, calcium gluconate. Appointed as adsorbing agents. The same activated charcoal. With the proper treatment of the syndrome is not progressive, which means that a person feels comfortable in life.


To each his own!