The fear of this is absolutely irrational. For example, someone in the subway seems like all looking at him and thinking about how he is a failure. Or someone can not eat in the restaurant, because I am sure that necessarily something shed or dropped, and all others will point fingers and laugh at him.

Scared they are far from the people 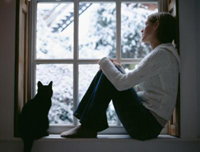 Social phobia almost always terrified of publicsituations: speeches, reports, examinations (even if confident in their knowledge). His frightening new acquaintances, and in general communication, as such ... And, what is more important for him the source, the greater the fear (especially when it comes to the opposite sex).

Often when a person is afraid to speak of social phobiaon the phone and use e-mail. It can not work when watching him, can not eat in the company prefers not to look people in the eye.

It would seem, why not? Few people like it when looking under the arm, or look in the mouth during lunch. But talking about something else. During the attack, social phobia arises a cocktail most unpleasant symptoms: difficult speech, breath, heartbeat quickens, you may be stuttering, dizziness and nausea, trembling of the hands and the desire to cry. A man covered with cold sweat, or it goes hot, and all this accompanied by a feeling of unreality.

As an independent disorder social phobiaWe identified at the end of the 60s, and a close study began only last ten years. Therefore, when they say that the number suffering from social phobias is growing, it is unclear where does such statistics. Whether indeed the rhythm of modern life contributes to the formation of social phobia, or just the doctors were more likely to put such a diagnosis. However, social phobia today nobody believes exotic. At various times, her life is subject to more than 10% of people.

What does "at various times"? The symptoms of social phobia may be temporary or permanent. A classic example: the child at all made fun of the teacher, and then he begins to be afraid to answer at the blackboard, and maybe even do go to school do not want to. However, it goes pretty quickly. And it happens that a person does not know where the first came to him the fear of other people's views condemning, but this fear becomes his companion for life.

Social phobia - a disease of the young. She rarely begins after twenty years, and about half the cases the disease will make its debut in the school years (ten years). What, in general, is not surprising. On the one hand, the child first encounters with a lot of stressful social situations, takes for granted the fact that he can be mocked, and not one person, but a large group.

On the other hand, nobody canceled childcruelty. Perhaps all of us have seen how a whole class of baits "white Varon," and so do boycotts were a legitimate means of "punishment" in the days of the pioneers. By the way, sometimes the consequences of lack of professionalism of teachers or cruelty entire educational system may even exceed the damage caused by their peers.

Many of us still remember the "antipode" board of honor- Wall newspaper, the name of which always began capacious word "shame", and then depending on the circumstances: "shame hooligans", "shame Losers", "disgrace sluts" ... From the same opera - public reprimand to the class meeting, the line, god forbid, teachers' meeting. Facing such public humiliation situations can be very traumatic for the child, even if he had not tried this nightmare to me: "With me does not happen, but it might."

Of course, like stress - not onlypossible cause of social phobia. Psychoanalysts, for example, sees the roots of social phobia in a cold, detached behavior of the mother or injuries related to the separation from his mother at an early age. But there are cases of social phobia when impossible to allocate at least some background of its occurrence.

Between depression and alcoholism

Inability to engage in social contactsvery painful, as in social phobia persists criticality, a keen awareness that not much in the manner that you lose something very important with something to you.

Perhaps no social phobia, which is notI am trying to overcome his illness, but, unfortunately, professional help such patients are treated rarely. Why? Firstly, in Russia to date, not many psychologists and psychiatrists, who can really work with social phobia. To the shame of the profession have noted that there are experts, and the words that somehow have not heard (not in Moscow, of course, and not Peter, but there). Secondly, often the fear of interaction with the doctor is irresistible. 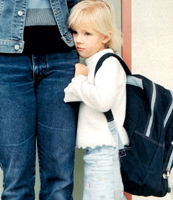 If left untreated social phobia may on its backgrounddevelop a set of much more serious diseases. Most often it is depression. With them, it is usually treated, and as a result to a psychiatrist. Also, quite often it develops alcoholism. With him, too, get to the doctor, but by the Drug Addiction and often against their will.

A mechanism is simple: alcohol as a sedative removes the fear of attacks, and a man not to be isolated, are increasingly resorting to "self-medicate" firewater. What happens next, I think you can not describe. Alcoholism, fortunately, can be cured, at least, it is possible to achieve stable remission, but in the absence of alcohol social phobia will return immediately.

If alcohol - a frequent method for selfmen, women run into the role of a housewife. It would seem, here it out! But no, almost always with a similar behavioral strategy social phobia begins to progress and becomes truly ugly forms. Until it is impossible to go shopping and sёzhivaniya circle of friends to family members.

In contrast, specific phobias, suchsuch as fear of mice or darkness, from social phobias help special medicines. Very popular beta blockers. Some of them even abuse: drunk hurl without social phobia just to worry less, for example, of public speaking. These drugs help to cope not only with the very fear of how much it reduces symptoms such as trembling hands and voice, sweating palms and heart palpitations.

The problem is that beta-blockers have serious contraindications: asthma, diabetes, heart disease - and to use them may not all.

Often social phobia prescribed antidepressants,but they are not always effective, and they have to take a long time. Ideally improvement comes only a few weeks, but after cessation of treatment the symptoms may return. Another minus: the side effects of antidepressants reception may not be appropriate for people with social phobia.

Imagine: Vanya experiencing social phobia associated with socializing with the girls. He prescribed an antidepressant, and everything seems to be in the order of treatment works. But the trouble is, the side effect of pills - decreased sex drive. The question is whether the game is worth the candle, and there will be more confident Vanya?

In any case it is recommended to combine medications to work with the psychologist. The main thing to find a qualified professional who is right for you.