Dementia does not always come by itself - veryIt often occurs after an illness. And the leader of such disease is stroke. This article tells about the features of vascular dementia.


Stroke - the cause of mental disorders

Mental disorders in vascular lesionsbrain - not a rare phenomenon. This group combined mental disorders arising in the various forms of vascular pathology (atherosclerosis, hypertension and its consequences - stroke, heart attack, etc.). These diseases can occur without pronounced mental disorders, with a prevalence of somatic and neurological disorders. All the more so in patients with mild, "non-psychotic" disorders are treated in ordinary clinics and do not fall into the field of view of a psychiatrist.

Psychiatric manifestations of vascular diseasebrain varied both in nature and the depth of disorders, from neurotic symptoms and sharpening of character traits to psychotic episodes and pronounced dementia (called vascular dementia).

At the initial stage of the disease, patients complainheadaches, dizziness, noise in the head, sleep disturbances, fatigue, irritability, intolerance to strong stimuli, forgetfulness. The mood can be reduced with a touch of anxiety or with tearfulness.

The character: as if some features are erased and sharpened hypertrophy or others. The involution of age (under 60 years) are amplified or there are such personality traits as anxiety, indecision, mistrust, resentment. For the elderly are more characteristic selfishness, greed, callousness, zastrevaemost, indifference to others.

With the progression of vascular processthere are signs of reduction of personality and intellect, ie dementia. It appears rigidity (lack of readiness to change), and thoroughness of thinking, weakening of memory on current events and the difficulty of the development of new material, narrowing the scope of perception and a decrease in its definition, as well as changes in the level of judgment, reasoning and intellectual productivity.

First, you need to treatvascular disease. Along with these widely used drugs that regulate metabolic processes (nootropil, encephabol, piriditol, gammalon) and contributing to the improvement of the memory, as well as drugs that increase the level of cerebral blood flow (cavinton, stugeron, komplamin, trental). Selection of drugs is carried out only by a physician taking into account the nature of the vascular process. Psychotropic therapy appointed psychiatrist, depending on the mental state of the patient with dementia. 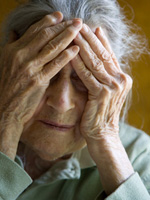 Vascular dementia (dementia) may developgradually or sharply after suffering a cerebrovascular accident (post-stroke dementia). Characterized by varying degrees of violation of memory of current events and new information. To mask this phenomenon, patients start to use notebooks, tie knots "in memory", etc.

Neutrachennoe awareness of the disease and the ability tocritically evaluate their condition helps these patients to adapt to life and to a certain time, to hide symptoms of illness, such as memory impairment. The "core" of personality remains intact, ie, Reserved skills and behaviors, Attitudes, the nature of relationships and reactions.

With frequent violations of cerebral circulationMemory disorders are becoming more coarse and dementia - deeper. In addition, in cerebral atherosclerosis and hypertension, accompanied by complications as stroke, post-stroke form foci of softening and cysts, there are acute manifestations of mental illness, often at night.

Such night "state of confusion"of short duration and are often repeated. These psychoses can dominate different mental rasstroytsva or clouded state. And one syndrome may be replaced by another. Most often marked by dizziness type of delirium (delirium), other forms are rare.