Home>Psychiatry>Obsessive-compulsive disorder in the child

Obsessive-compulsive disorder in the child

Obsessive-compulsive disorder is associated primarily with increased anxiety children. The level of anxiety they are always high, but increases in situations that are difficult to predict the outcome.

Often, such a neurosis develops in children,education which is contradictory. For one and the same act he can get punishment or encouragement - depending on the mood of the adult. When my mother in a good mood, she came home from work, he said: "Let's quickly remove the toys and go for a walk, ice cream, eat!" If the mood she is poor, she is on the threshold pounced on the child, "I'm tired as a dog, in you're all scattered! "The child is difficult to develop behavior patterns. He can not understand that they approve and what is not important adults. The same thing happens in families where grandmother immensely pampered child, his father tries to tough measures "to bring up a real man," and his mother takes care of the "harmonious development of personality", carrying the child into the mugs.

The unpredictability of the situation - that is a common causealarm. Trying to predict what to expect, makes us believe in signs, to invent their own ( "If the first machine that pass by, is a bright, mom today will not swear, and if the dark ..."). Increased anxiety "in children is often in families with secrets. For example, parents are in the process of divorce, but hide it from the child, supporting each other quite correct relations, or the child is not talking about the severity of illness of someone close. In any case, the child feels oppressive atmosphere in the family, as a rule, understand that it is not something they say, worries for the future welfare of the family and his own.

Obsessions can be manifested in the emotionalfield (obsessive fears), in thinking and in motion (obsessional rituals). Various combinations iavyazchivostey manifestations in different areas. It combines all obsessions critical attitude of the patient towards them, lack of understanding of their psychological sense, his futile attempts to deal with them. Realizing unfounded fears, obsessions stupid, ridiculous rituals, the patient is struggling with them, but the more intense struggle, the more alert, the more severe their symptoms.

To cope with anxiety, the child - often unconsciously - creates rituals, the meaning of which he does not understand and can not explain to adults. The therapist can help you understand them.

Rituals may be associated with aggression,directed at oneself (self-aggression). These include: gnawing nails, Curling and hair pulling, stripping of burrs, scratching and skin scratching, biting lips, light and not very blows dealt by themselves, and similar actions. Thus the child, as it were in advance punishes himself. He unconsciously hoping that after this fate (God, Providence, Nature, Occasion) will be more merciful, all ends well (the control task will be solved, bullies will not stick, my mother did not notice the broken cup and so on. N.). 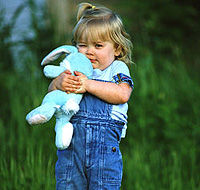 Other rituals may be associated with attempts to patientsresist anxiety, demonstrating his strength. Children unconsciously trying to scare away the danger, to overcome it. These rituals are obsessive spitting, otmahivaniya, jerking his head, tapping on objects, and so on. N.

The next attempt to unite a group of ritualssupersede patient anxiety causing at pleasant emotions. These include obsessive licking of the lips, tongue sucking, picking your nose, stroking himself, sometimes erogenous zones, and other actions.

Sometimes rituals are actionsonce allowed the patient to cope with a difficult situation, which led it to success. They are characterized by great diversity and, as a rule, illogicality. For example, one of our patients during school competitions run tripped, but the first to reach the finish line.

Since then, he unknowingly stumbles, not only during a sporting event, but also, for example, when there is an exam, when late coming home and wondering: "Will curse or not?"

Often it is the rituals help patientsdeal with obsessions or fears. Obsessive fears are very diverse. AI Zakharov (1998) believes that some of them (fear of the dark, fear of loneliness, fear of enclosed spaces) may be associated with anxiety, the child tested even in utero and during birth.

Obsessions are also diverse. They can be quite harmless (obsession popshtka remember someone's name, obsessive melody), and can cause very strong emotions, negative emotions. In children and adolescents in particular are often so-called blasphemous thoughts, usually sexual content (compulsion to swear, to represent his parents during intercourse and so on. N.).

Coping with the symptoms of obsessional neurosisstates can only identify the cause of the alarm and eliminated its capabilities. Fight with the symptom without understanding its origin and essence rarely leads to a positive result, and sometimes worsen the patient's condition. For example, when a mother is constantly pulls the child, biting fingernails anxiety had increased, decreased self-esteem. Chances to cope with "bad habit" in such an approach is almost there. That is why many compulsive symptoms persist for years.