The main symptoms of acute and chronic bronchitis in adults and children. Obstructive syndrome as the most dangerous complication of the disease.

Like many other inflammatory diseases,bronchitis can be acute or chronic. Symptoms of these options as a whole is similar, but there are differences. Symptoms of bronchitis in adults and children, most often occur after cold or viral infection. At low temperatures the protective function of the respiratory system are reduced, and the microorganisms begin their destructive work. So begins an acute bronchitis. 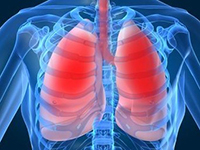 In most cases of acute bronchitis symptoms occura few hours after the onset of SARS. After the common cold, the appearance of sore throat and hoarseness fever. Fever itself is not the case, the thermometer rarely shows above 39 ° C.
After a short time, there is a dry cough. Its intensity increases, it becomes painful, "heart-rending", accompanied by pain in the sternum. With a very strong and frequent attacks may appear unpleasant sensations in the lower chest. This is due to the powerful contractions of the diaphragm.
Cough remains dry for a few days(Usually 2-3), and then gradually over a period of days becomes wet. First sputum separates very small - 30-50 ml per day, but after its production increases. The nature of it depends on the causative agent. Mucous sputum more often when viral bronchitis, mucopurulent - in bacterial.
The situation is somewhat worse with complicationsdisease bronchiolitis. The appearance of shortness of breath at rest, slowing cough while reducing sputum discharge may indicate inflammation of the transition to the smaller bronchi. In this case, the patient often receives an emergency position - half-sitting. The occurrence of bronchiolitis - a dangerous complication that requires treatment in a hospital.

The main symptoms of chronic bronchitis (CB) are cough, sputum production, and with the appearance of obstructive syndrome - shortness of breath.
Cough at CB always exists. As during exacerbations and remissions in time. In general, symptoms of the disease is not much different from the acute form of the disease. When remission is focusing on the development of other features.
Cough in the early stages of the disease appears onlymorning. This is due to the increase of physical activity after a night of breathing requiring amplification. In the later stages of the cough persists throughout the day.

Serious bronchial obstruction (blockagebronchi) can lead to the appearance of night attacks. Cough in this case can be long (30-40 minutes), hoarse, accompanied by attacks of breathlessness and difficulty in breathing.

Sputum - the second most important symptom of chronic bronchitis. In the beginning, it is easily separated disease, it does not exceed 50 ml per day. After her discharge of the patient becomes easier.

In the later stages of the expectoration is difficult, the generalthe patient's condition is getting worse. During his cough swell the veins in the neck, the face is red, but the amount of sputum is very small. During the day the patient is "raskashlivaetsya", but does not feel healthy.

Symptoms of bronchitis in children look just likein adults. Much more important is the understanding that the child's body's ability to compensate for the lack of oxygen is much lower. Linked to this is a high risk of obstructive syndrome. With a strong cough in children may occur bronchoconstriction - a sharp narrowing of the airway lumen. This condition is extremely dangerous and without adequate emergency treatment can lead to death of the child. 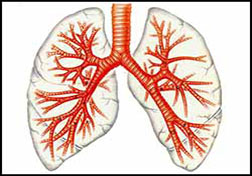 Treatment of bronchitis often creates difficulties. Keep in mind that drugs can not choose their own. Depending on the stage can be used drugs that suppress the cough or provoke it. For children, many drugs may be contraindicated. Therefore, a visit to the doctor - it is the right move.

Common bronchitis treated on an outpatient basis. Applied antipyretics, mucolytics, antiviral and immunomodulating medications, if necessary - antibiotics. When bronchiolitis or obstructive syndrome, the patient should be sent to the hospital.

Without oxygen there is no life. Any disorder of the airways reduces the saturation of the whole organism this vital element. Therefore, the appearance of the first symptoms of bronchitis should immediately call a doctor. The sooner treatment begins - the lower the risk of complications or transition into a chronic form of the disease.