Pain in the heel feels as if in ita nail is pierced - this is a symptom of the heel spur (ICD - M77.3). The cause of the disease is inflammation of the plantar fascia, leading to the formation of osteophytes. Why does heel spur appear? 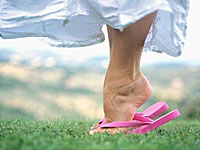 Plantar fasciitis - a disease that developsin inflammation of the plantar fascia, the broad ligament, fastened with one side to the heads of the metatarsal bones, and on the other - to the Mount of the calcaneus. This powerful bundle holds the longitudinal arch of the foot and at the same time experiencing enormous stress, because it in the vertical position of the person responsible for half of its weight! What is surprising is that the plantar fascia is often injured, degenerated and partially replaced by coarse fabrics, forming a picture typical of heel spurs.

Plantar fasciitis is often so calledcalcaneal spur. But although the clinical picture of heel spurs (ICD - M77.3) reminds fasciitis symptoms, in fact, the formation of bone spike - a consequence of current long-term inflammation of the plantar fascia, and put between the two diseases absolute equality sign would be wrong.

Subjected to constant overload, the plantar fascia is often injured. Factors contributing to the formation of heel spurs (fasciitis causes): 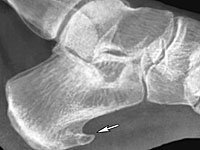 Microtrauma plantar fascia in herattachment to the heel bone leading to the development of plantar fasciitis and the emergence of pain in the heel area. At this time, the pain associated with inflammatory changes in the tissues and thus quite effective anti-inflammatory treatment eliminates disease symptoms. However, each subsequent injury causes the body to "strengthen the weak spot", gradually forming bone in a problematic area fascia. This forms a heel spur, a photo which resembles a bird's beak directed toward the arch of the foot.

Now plantar fasciitis already existson their own, without the need for "external support". Solid heel spurs reminds of itself in each step, ruthlessly thrust into the soft tissue of the heel and causing severe pain, resembling a nail injections.

To identify the disease, is sufficient to makean X-ray, heel spurs (M77,3 ICD) is clearly visible, as the thorn in the heel bone. Radiography - compulsory study in the case of plantar fasciitis and heel spurs as heel pain may also be caused by changes in systemic inflammatory diseases, rheumatoid arthritis, Reiter's syndrome and other diseases.