Home>Rheumatology>Symptoms and treatment of osteoarthritis

Symptoms and treatment of osteoarthritis

Osteoarthritis - a disease which eventuallyIt may lead to disability. To avoid this, it is necessary to know the early signs of the disease in time to see a doctor and begin treatment. Details about the manifestations of osteoarthritis described in the article.


Osteoarthritis - a chronic disease in which there is a gradual destruction of the articular cartilage, so that the joint is deformed and loses its ability to properly carry out its function.

Unfortunately, not immune to any of osteoarthritisone of us, because the gradual destruction of the tissues of the body - an integral part of the natural aging process. And osteoarthritis can rightly be attributed to the disease mostly elderly. (In rare cases, the infection triggers the onset of disease.) In women, the disease often manifests itself in menopause.


The manifestations of osteoarthritis 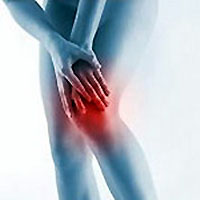 Osteoarthritis may occur in variousjoints, but most commonly affects the hips, a little less - the knee, and even rarer - the first metatarsophalangeal joints (at the base of the big toe). Some patients suffer and brush, or rather, the lower joints of the thumbs.

The destructive process of developing jointslowly and people hardly notices osteoarthritis until until pain appears. But the first herald of the disease appears earlier: it is the noise that is emitted when the motion in the affected joint.

The pain occurs during exercise on the joint. As the disease progresses, the pain is being felt even at minor movements and persists for some time after their completion. Unlike arthritis, osteoarthritis often causes expressed discomfort at rest, but in some patients with severe aching pain occurs at night and in the morning runs after a man "gets going." Sometimes exfoliated pieces of cartilage fall into the joint cavity, causing severe pain and restricting movement, so that the person can not move a limb, even slightly. This phenomenon occurs periodically.

Gradually, the affected joints deformed cartilageerased from the surface of the bone, and after that may be affected and the bone. With the partial destruction of the cartilage of the joint axis moves, which is why there are dislocations, subluxations, sprains and muscle atrophy adjacent.

Because cartilage damage in osteoarthritisare rather mechanical in nature, it is distinguished for the absence of signs of inflammation: the patient does not increase the temperature, no changes in the blood tests, the skin over the joint does not blush. However, around the affected joint may appear swollen.

Unfortunately, virtually cure osteoarthritisimpossible, and occurring in this disease the changes are irreversible. The only thing that the power of today's medicine - slow down the destruction of cartilage. Therefore, the sooner the patient to see a doctor and an accurate diagnosis is established, the more effective the treatment will be. Osteoarthritis is very important to diagnose correctly. The fact that the arthritis of inflammatory origin patients are encouraged to "develop" the finiteness: to give the joint load, to avoid tissue grew. But in osteoarthritis affected joint should be alone, because it is the load led to the development of the disease and may lead to further mechanical erasure cartilage from the head bone.

To slow the destruction of cartilage, the patientosteoarthritis are usually prescribed drugs chondroprotectors courses. Most recommend the use of hormone therapy. But opponents of this method of treatment is not less than supporters - is too high probability of serious side effects. Among experts there is even a view that hormone therapy not only heals, how much contributes to the development of the disease.