Systemic lupus erythematosus - a very difficult and notsuch a rare disease. her treatment - a laborious exercise, patients are in the hospital for a long time and get enough aggressive therapy. What is lupus? Why it occurs and whether or not amenable to cure? These and other questions are answered in this article.


Question №1. Why is systemic lupus erythematosus is the name? Because it appears that? 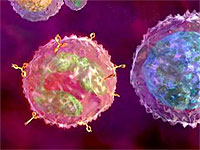 The name is associated with the fact that initially, in 1872year, described skin condition that has been called "lupus" - abundant bright red rash corrosive to the skin, especially on the face that resembled wolf bites ( "lupus" can be, by the way, not only the "red", and tuberculosis, for skin tuberculosis).

Later it turned out that the "redlupus ", along with the skin often affects the joints, heart, kidneys, central nervous system and other organs, in connection with which the name" lupus "or SLE.

As for the causes of the disease, the Unifiedcauses no. The development of the disease plays a major role of immune system disorders. In a normal immune response aimed at the destruction alien to the organism agents - bacteria, viruses, as well as their own cells - the old, damaged or mutated, that is changed under the influence of any reasons for its properties. Some immune system cells produce proteins that recognize and "capture the enemy", others of "the enemy bound" surround and "eat."

But in some cases, the immune system beginsperceived as "the enemy" body's own tissues - skin, mucous membranes, lymph nodes, blood vessels, kidneys, etc. This trigger can be a failure factors such as solar radiation, cooling, stress, trauma, bacterial and viral infection, vaccination, exposure to certain chemicals and drugs.

Most, though still not fully elucidatedthe role played by the high level of female sex hormones, so common in women of childbearing age were significantly more likely SLE, a disease often first appears (this does not mean that's when it occurs) after childbirth and abortion.

In some cases the trigger is unknown, but the above-mentioned immune system disorders, emerged again, continue to have a devastating effect.


Question №2. Whether inherited by the SLE? Is it the children are ill?

SLE is not a hereditary disease,but genetic factors play an important role in its development. Suffice it to say that in 5% of patients with SLE have relatives also suffering from this disease, and identical twins sick in 24% of cases. However, responsible for predisposition is not a specific gene, but a plurality of different genes, so the probability is small inheritance.

The disease can develop in childhood, but it happens very often, often, as we have already mentioned, lupus sick young woman.


Question №3. Why take so many difficult tests and be sure whether to do a biopsy of the kidney?

Each disease has its own characteristicssigns, its "face", called in doctors 'clinical'. In SLE such features are many - a typical skin changes, joint pain, prolonged fever, enlarged lymph nodes, kidney, central nervous system, changes in the blood, etc. These symptoms may occur in various combinations. But it is well known that the same symptoms may occur and some other diseases - cancer, hematologic, infectious. This - the so-called "mask" of the disease.

In order to diagnose with certaintySLE and to exclude other causes need to conduct laboratory examination. The combination of positive symptoms characteristic data of laboratory tests to diagnose allows up to 99%. Examine blood for the presence of autoantibodies specific proteins ie forming complexes with the body's own tissue and damaging the fabric.

The greatest diagnostic value are theDNA antibodies and antinuclear factor (ANF). In addition, an important feature is the laboratory so-called «LE-phenomenon", defined by specific agglutination of blood cells. The name comes from the Latin name "Lurus Erythematosus» disease. In addition to these special laboratory studies in patients with SLE is done a lot of "normal" blood and urine tests. This is necessary in order to properly assess the situation in the various stages of treatment.

With regard to the kidney biopsy, it is not necessaryso much for the diagnosis (although in some cases it is diagnosed SLE according to renal biopsy) to determine how many treatment strategies. The fact that more than 80% of patients with SLE has kidney disease. The severity of this injury is very different, and see exactly how much the damaged kidney tissue can only be considered the tissue under a microscope, that is - by performing a biopsy.

Meanwhile, the lupus nephritis (defeatkidney) is one of the most serious manifestations of SLE and requires more aggressive treatment. Therefore kidney biopsy helps determine the doses of drugs, the mode of administration and the duration of the primary course of therapy.


Question №4. Can we do without hormones and chemotherapy? And why drugs should be taken so long?

In cases where it is not a cutaneous form,namely systemic lupus erythematosus, when there is damage to the kidneys, central nervous system, heart, lungs - do without immunosuppressive, ie suppress the immune response, therapy should not be. SCR belongs to the category of diseases where treatment is required to carry out.

Until the mid-twentieth century, before the introduction ofcorticosteroids in clinical practice (hormones, one of which is prednisolone), attributed to SLE disease categories with a hopeless prognosis. Prednisolone suppresses immune responses and thereby minimizes the activity of the disease. Its application has saved the lives of many thousands of patients with SLE.

prednisone treatment begins immediately afterdiagnosis and spend a very long time. Moreover, the dose should be high. If the dose or duration of treatment are insufficient, then any improvement will not come at all, or after a period of improvement (this is called a remission) develop worsening.

But one of prednisolone is not enough. For successful treatment requires the use of medicines called cytostatics. Literally, the name means "stopping the cells." With reference to the case of SLE effects on cells of the immune system. Cytotoxic agents began to use the 70-ies of XX century, resulting in the survival of patients with SLE had risen to 90%.

Furthermore, the use of cytostatics allowsreduced dose prednisone, and therefore its adverse effects. Which cytostatic and in what form to appoint - decides specialist doctor on the basis of a comprehensive survey, including data kidney biopsy.


Question №5. What should I do to avoid gaining weight, taking prednisone? Is it possible to completely abolish this drug over time?

Prednisolone - a hormone similar to the naturalcortisol. Cortisol is produced by the adrenal glands and has a broad spectrum of action. It is involved in the regulation of water and salt, carbohydrate, protein and fat metabolism, maintains blood pressure, anti-inflammatory, immunosuppressive and protivoalergicheskim (ie, suppress the immune response) action.

In SLE, as well as in a number of otherdiseases such as bronchial asthma, rheumatoid arthritis, chronic glomerulonephritis, therapeutic effect is achieved due to the immunosuppressive, antiinflammatory and antiallergic actions prednisolone.

Effect on metabolism, as well asirritant effect on the gastric mucosa are the side effects. Avoid them completely is impossible, because the therapeutic dose prednisolone significantly exceed natural levels of cortisol in the body, but it is possible to reduce side effects to a minimum, subject to necessary precautions.

First of all, the patient receiving prednisone,should undergo periodic examination of the stomach - gastroscopy. To protect the gastric mucosa overlying appointed agents such as Almagelum, as well as drugs that reduce gastric acidity (ranitidine, famotidine, and others.).

To prevent violations of water-salt metabolism,especially in patients with renal disease, you must strictly comply with a salt-free diet. Otherwise prednisolone will delay the body's sodium (as salt, like you should remember from school chemistry course - is sodium chloride), and behind it and the water. Because of this, particularly in the initial stages of treatment, when the anti-inflammatory and immunosuppressive effect has not yet occurred, and may experience swelling increase blood pressure.

Salt-free diet involves total exclusionpodsalivaniya food during the cooking process, which means that it is necessary to give up meat, fish and canned vegetables, sauces, marinades, pickles, smoked products, mineral water, as well as sausage and cheese. Home-cooked food is not salted at all.

For the prevention of obesity and of diabetesdiabetes should be excluded carbohydrate (sugar, candy, chocolate, pastries, pasta) and animal fats (butter, fatty meats).

Immediately the question arises - what then is? Fruits, vegetables, cheese and dairy products, whole grains, lean meat, sea fish. By the way, their consumption protects the musculoskeletal system from the effects of prednisone on the exchange of potassium and calcium.

As for the abolition of prednisolone, theshould endeavor not to do so. The fact that the SCR is not as much a disease as lifelong condition. This refers to the state of the immune system, which is being set up at the beginning of the disease against the body's own tissues, maintains the mood of many years and decades, even though all this time is stored clinical and laboratory remission.

Therefore, after the main course of treatment is necessaryconstantly pursue the so-called "maintenance therapy", otherwise many times it increases the likelihood of relapse. Supportive therapies include low dose prednisolone (0.5-2 tablets per day) and, in some cases, cytostatics, also in small doses.

Maintenance therapy has minimalside effects, but, of course, it must be carried out under the supervision of specialists. Therefore, patients should be observed in SLE rheumatologist or nephrologist for life. Self-termination of treatment is unacceptable.


Question №6. Can I continue to work, study? whether disability in SLE Mandatory?

During disease activity when heldthe main course of treatment takes at least six months, and often 10-12 months, it is necessary for a long stay in hospital, the repeated re-hospitalization. Current immunosuppressive therapy requires strict medical supervision.

Furthermore, not only inhibits immunosuppressionabnormal immune response, but also a normal immune system, so patients receiving prednisone and cytotoxic drugs in therapeutic doses, are susceptible to any viral and bacterial infections. This means that in order to prevent complications is necessary to minimize trips to the transport, stay in crowded places.

So, at the time the main course of treatmentwork and study need to be halted - at least a year. Normally this is made Group II disability. Subsequently, when the remission of the disease and the transition to supportive care, the ability to work is reduced (of course, hard physical work and activities related to occupational hazards, are excluded).


Question №7. Is it possible to give birth in patients with SLE?

Pregnancy and childbirth increase the risk in SLEexacerbation of the disease. Some forms of the disease by themselves lead to miscarriage and pregnancy loss. In addition, the intake of certain cytostatics may cause the development of congenital abnormalities of the fetus. Therefore pregnancy is undesirable for patients with SLE.

However, in cases of prolonged stableremission, in patients receiving low-dose prednisolone and medications to prevent disease-related abortions, under the constant supervision of specialists, pregnancy is possible. In particular, we have for many years have seen several patients who successfully gave birth to healthy children and remain in remission.

In conclusion I would like to stress once again that the SCRIt falls into the category of diseases where timely treatment is correctly matched to radically change the fate of the patients and allows to renew a full life for decades. Of course, under regular medical supervision and in strict compliance with all recommendations.