What are the surgical treatment of excessive sweating? What are these methods?


All methods of treatment of hyperhidrosis can be dividedinto two large groups - the conservative and surgical. In total there are about two dozen treatments. Some of them have only historical significance.

This is a small operation, which is carried out through thea tiny hole in the skin permanently and completely and eliminates the unpleasant symptoms of hyperhidrosis of the hands. Those who are worried about underarm sweating, as well as provide an overview of all the curious of other treatment methods.

Surgical interventions for hyperhidrosis candivided into two groups - "remote" and "local". The second group involves "work" the surgeon directly in the "wet spot". The first group involves the intervention of a "distance" from the "wet" places. These operations include a sympathectomy. Currently, there are several options for these operations, each of which we will give a brief description. Thus, in order of importance. 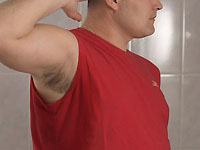 Endoscopic sympathectomy. To date, this operation is consideredthe optimal intervention for hyperhidrosis, as well as a number of other conditions associated with the "wrong" work of the sympathetic nervous system. A small puncture in the skin of the inside of the chest is entered thin tube with a tiny video camera. The image is displayed on a large screen. Through the same hole are special tools. Within minutes the surgeon reaches under the control of the necessary areas and places on land paravertebral ganglion metal clip or crosses the sympathetic trunk special tool. This method uses the main advantages of VATS operations. Endoscopic sympathectomy is performed, usually with sweating palms. To a lesser extent it affects the armpits. Sympathectomy is not used in the treatment of Athlete's Foot. It is known that lumbar sympathectomy causes impotence.

Open sympathectomy or conventional sympathectomy. Incision of the skin and tissues is performed on the rearchest surface. Made standard thoracotomy, apart ribs surgeon dissecting tissue, detects paravertebral trunk and bandages required node. Traumatic access, which subsequently forced to be in a hospital bed for several days, and then limits within a few weeks the patient's activity, made the surgeons look for other ways of intervention.

percutaneous sympathectomy performed using thin needles thatare brought to the paravertebral trunk. Introduction of special chemicals or destruction ganglia via the current leads to the same effect as that of the open sympathectomy. However, these interventions have not found particular popularity due to frequent "blunders". After all, bring the needle to the desired point of view, without control is not so easy.

Local or local surgeryThey find application in the treatment of axillary hyperhidrosis isolated, when sweating observed exclusively in the axillary region.

Liposuction axilla. Using a small tube that is inserted throughpinhole, made the removal of the axillary tissue. The destruction taking place in her sympathetic nerves leads to disruption of nerve impulses flow to the sweat glands. This method is more fully shown patients. Many patients are attracted to the so-called ultrasonic liposuction. The method is widely used in plastic surgery and liposuction allows more fully with a few smaller injuries. Unfortunately, for the treatment of axillary hyperhidrosis, besides the high cost of the procedure do not accrue.

Curettage (scraping) Axilla It differs from liposuction in that instead of removingfat is carried out "scraping" the area where sweat glands are located, from the inside. As a result, as is the destruction of the small nerves and damage to the sweat glands. This method is used most often. An improvement curettage is videoassistentsiya allowing some to reduce the chance of bruising and fluid buildup in the postoperative period.

Excision of the axillary area It provides for the removal of the skin, which is locatedthe bulk of the sweat glands. Despite the simplicity of the intervention, such operations are not widely used due to the fact that the resulting scars decrease subsequently range of motion. This method is used less frequently because of previous trauma, but it is the best in recurrent hydradenitis - disease apocrine sweat glands ( "bitch udder").