Photodermatitis (photodermatosis) - diseases caused by increased sensitivity of the skin to sunlight.

manifested
fotodermatit as blisters, redness, itching and flaking of the skin,
arising after exposure to the sun. Usually, rashes appear
on the face, sometimes on the body, very rarely - in the hands and feet. The disease often
develops at the exit to the sea, in a country with a more active, unusual
for us the sun.

What is exogenous photodermatitis

AT
As the most striking example can be exogenous photodermatitis
lead the so-called meadow dermatitis. In summer, during the flowering period,
Many prairie plants emit special substances - furokumariny,
which are deposited on the skin in the human being in those places.
With simultaneous UV exposure some sensitive
people to him may occur redness and blisters (vesicles
and pustules). Eruptions are accompanied by severe itching. Further
in the affected areas of skin pigmentation is long. 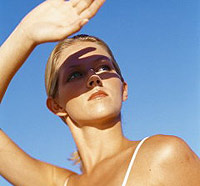 fotodermatit
can also occur if the sun in front of the sensor output
person anointed him with ointment or cream, or use perfume
and deodorant. Substances of the different cosmetic or
perfumes, can react with ultraviolet
rays and cause allergic reactions. These properties are,
for example, eosin, which may be contained in the lipstick,
and para-aminobenzoic acid (PAVA), a part of some
sunscreens. In addition, such actions have
polyunsaturated fatty acids, retinoids, bergamot oil, St. John's wort,
rose, musk, sandalwood, fennel juice, parsley, boric, salicylic
acid, phenol, mercurials.

Therefore, collecting makeup
to rest on the sea, it is advisable to study the composition of perfumes
and cosmetics, which is planned to take with you. And away from sin,
postpone the one which includes the above substances.

Why do some
People smooth and beautiful tan, even perfumed spirits, and others
blistered? Sometimes this is due to the presence of any
chronic diseases, especially liver or adrenal glands. more
other photodermatitis affects people with fair skin and young children,
whose protective mechanisms of the skin reaction is much weaker.

What is endogenous photodermatitis

TO
photodermatitis this group are quite rare
diseases in development of which play an important role in the disturbances
the immune system and various metabolic disorders
(Disturbances in metabolism). Endogenous photodermatitis include,
in particular, porphyria, xeroderma pigmentosum, solar eczema,
solar pruritus, Hydroa vacciniformia (hydroelectric vaktsinoformnaya)
polymorphic photodermatosis.

All of these conditions require
attention of specialists (dermatologists, immunologists,
allergists), and a thorough examination.