What to do with a mole

Birthmarks, moles - a different kind ofinnate skin changes to a limited extent. There are non-vascular birthmarks - in the form of light or dark pigmentation of the skin, or in the form of warty or stalked skin elevations, and disease, the so-called angioma.

The concept of a mole 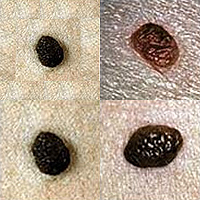 Birthmark, nevus (naevus maternus) - congenital defect of the skin in which some of its areas differ in color and / or a special kind of warty surface.

Moles have no specific localization. Their show at birth, in the first years of a child's life or later.

Vascular birthmarks (hemangiomas) characterized by different values, unevenedges, pink or bluish-red, pale with pressure; they flat surface (capillary birthmarks) or knotted laid down in the skin, with a bumpy, cavernous surface (cavernous moles).

warty moles manifested by single or multiple plaques of various shapes dirty gray or brown in color with a rough surface of the cornified.

Pigmented birthmarks - From light brown to almost black -are the size of a pinhead to occupy large areas of the skin plaques. Their surface can be uneven, covered with hair (pigment-hairy moles).

The name "birthmarks" is not entirely accurate, sincea significant portion of them are acquired. Almost every person has a certain amount of moles, which usually appear in childhood and adolescence. 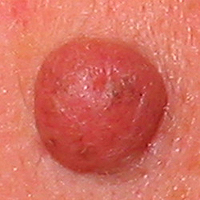 Moles - Lentigo (border) - This is uniformly flat pigmented spotfrom brown to brown-black, which result from increasing the number of melanocytes at the interface of the dermis and epidermis (skin layers). Compared with freckles and lentigines darker located less; moreover, their color is not amplified and the number does not increase under the influence of solar radiation.

Moles - Epidermis-dermal nevi - usually flat, but sometimes slightly elevatedabove the skin. The color varies from light brown to almost black, with sizes ranging from 1 to 10 mm in diameter. They arise as a result of accumulation of melanocytes at the border between the epidermis and dermis. Birthmarks on the palms, soles and in the genital area are usually epidermo-dermal.

Moles - Complicated nevi - Often have a dark color and more or less raised above the skin. Accumulations melanocytes localized (are) on the boundary between the epidermis and dermis, and in the dermis.

Moles - intradermal nevi raised above the skin; their coloration varies from body to black, and the surface may be smooth or hairy wart.

Moles - nevus Sutton - A pigmented birthmarks (usually complex andintradermal nevi), surrounded by a ring of depigmented (unpainted) of the skin. Nevus Sutton disappear spontaneously, and only rarely give rise to malignant melanoma.

Moles - dysplastic nevi - A pigmented spots and irregularly shapedwith indistinct borders, slightly raised above the skin, their color varies from tan to dark brown on a pink background. Dysplastic nevi first attracted the attention their unusual appearance and increased frequency in some families (inherited). As a rule, they are larger than ordinary birthmarks, reaching 5-12 mm in diameter; localization and different: dysplastic nevi, although they can occur anywhere, most often found in areas normally closed clothing (on the buttocks, breasts), or on the scalp.

Most people have an average of 10ordinary moles, whereas dysplastic nevi may be more than 100. Common nevi usually appear during the onset of maturity, dysplastic however, continued to occur even after 35 years.

Moles - Blue nevi - Towering above the skin, sometimes hemisphericaleducation, dense, usually with a smooth surface, blue, dark blue, sometimes brown, with a clear boundary, the magnitude of 0.5 to 2.0 cm, without hair. The preferred localization is the face, limbs and buttocks.

Birthmark - A giant pigmented nevus - is most often congenital and increasesas the child grows. These nevi have a flat papillary surface and can occupy significant areas of the skin of the trunk, limbs, face. The predominant color is brown, grayish, black.

The reasons for the degeneration of moles and Oncology

To trigger a regeneration of the mole, of course, needs a boost, stimulus.

The most powerful of all is excessive sun exposure.

High dose ultraviolet irradiationcauses irreversible changes in skin cells, greatly increasing the risk of their degeneration. For each person, the critical amount of insolation is purely individual. Defining this facet is not easy, therefore it is better to just remember that prolonged exposure to the sun is harmful to the body. The skin is forced to protect itself from ultraviolet radiation. Excessive tanning is inevitable burns that “hit” the skin's immunity. And she, having an unusual “memory” peculiar only to her, does not forgive excessive sunstrokes. As a result, malignancy of moles and age spots, the emergence of all kinds of neoplasms.

Especially careful should be expectant mothers

Hormonal changes in their body - and it necessarily occurs during pregnancy - sometimes entail serious changes in the skin cells.

A common cause of tumor development is trauma. If you hit it with a fingernail, accidentally damaged it with a washcloth, some kind of sharp object, be sure to see a doctor. And not to the therapist, but to the oncologist!

Most susceptible to mutagenic and sunlight people:

Strange mole - faster to the doctor

Particular attention is required: moles larger than 0.5 cm in size, as well as heavily pigmented and sharply separated from the surface of the skin (having a kind of accented edge). The “lacquered” surface of a mole or pigment spot, as well as any sudden transformation, whether it concerns shape, color, size, is also a serious reason for contacting specialists.

Of even greater concern should cause symptoms,characteristic degeneration of moles and pigmented spots. In this case, we are talking not about prevention and the need to "catch" the terrible disease at a stage when it can still be overcome.

All of these symptoms require immediate consultation with an oncologist:

What to do with a mole

Since moles are very common,and melanoma are rare, prophylactic removal of moles unnecessarily. However, if a mole suddenly increased in size (especially in the presence of jagged edges), darkens, becomes inflamed, it becomes spotty, it begins to bleed, ulcerate, itchy or sore, you must uninstall it. Finding at possible signs degeneration birthmark - necessarily refer to a medical oncologist.

No matter how trite it sounds, you need to take care of yourselffrom a young age. After bathing in an open pond, be sure to take a shower and dry yourself with a towel. Remember: drops of water, crystals of sea salt act on a sunny day as lenses that repeatedly enhance the harmful effects of insolation (exposure to sunlight). Do not sunbathe from 10 to 15 hours. This is the most dangerous time. The midday sun must be avoided. Not even a beach suit or an awning can save from its harmful rays. At this time, dry sand reflects up to 17% of ultraviolet rays, clouds and fog pass them up to 50%, wet clothes after bathing - from 20% to 40%. In men, melanoma affects the thigh in 4.9% of cases, the lower leg in 6.7%; women have a hip - in 6.7%, a shin - in 26.3%. Think about these numbers, lovely ladies. Indeed, many of you, while remaining dressed, being in the shade, do not consider it dangerous to expose your feet to the sun. If you don’t wear synthetic tights in the heat, which hold up to 20% of direct sunlight, get light cotton trousers that let in no more than 28% of ultraviolet radiation.

In any even slight suspicion not too lazy to visit the oncologist. In such situations are unacceptable correspondence consultation!