Bruising of the brain - is local damage to the brain substance from minor (small hemorrhages in the affected area, and swelling) to severe (breaking and crushing brain tissue).


In addition to the clinical symptoms of brain clearly traced focal characteristic of the affected area of ​​the brain. There are 3 degrees of brain injury: mild, moderate, severe. 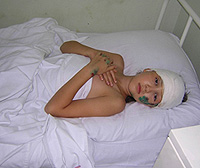 brain contusion to severe characterized by switching off the consciousness ofseveral hours to several weeks. Expressed and long remain focal symptoms caused by lesions of the brain stem: hyperthermia (up to 39-40 ° C), a disorder of the respiratory rhythm, or bradi- tachycardia, hypertension. Dominated by neurological symptoms: violation of the diameter and the reaction of pupils to light, eye movement disorders, depression corneal reflexes (reflex closing of eyelids with a light touch) and swallowing, and others. The general condition remains extremely serious for many days, and often ends in death.

If the positive dynamics of cerebral and focal symptoms disappear slowly, and motor and mental disorders remain for life.

Peculiarities of nursing care for patients with severe traumatic brain injury (pneumonia prophylaxis, oral care, feeding patients, and others.) Are considered at the end of the chapter.

All people with a brain injury, even lightextent, require strict bed rest for at least 1 month. Monitoring their condition at the time of the treatment is carried out neurologist, ophthalmologist, and after rehabilitation, patients are seen in the mental hospital.