In recent years, experts have noted a disappointing tendency - the frequency of chronic liver disease increases. In disruption of the detoxifying function, the accumulation of toxins in the liver leads to their entry into all organs and tissues. What to do in such cases? Help liver in detoxification and promote the restoration of its own detoxifying function.

First – Preparations for etiological treatment. So called drugs whose action is aimed at eliminating the cause of the disease.

These drugs include antiviral agents (interferons, analogs of nucleotides, nucleosides), which are used to treat chronic viral hepatitis B, C and D.

To combat other common causes of liver disease – Alcohol and obesity – even special drugs do not need. It would seem quite a bit: to give up the use of alcohol and lose weight, but it turns out to be a very difficult and even impracticable task for many people.

The second group is used in cases when it is impossible to completely or partially get rid of the etiological factor. These are hepatoprotectors – Preparations that increase the resistance of the liver to various external and internal influences, as well as promoting the restoration of liver functions. The second group of drugs is much more first, and includes funds with various composition and action mechanism. To properly select the hepatoprotector, it is necessarily taken into account its effect on the restoration of a specific function.

One of the most important functions of the liver – detoxification. It is broken to one degree or another with all chronic liver diseases. How does this happen?

The liver collects blood from the gastrointestinal tract, so everything that we eat and drink, passes through it. It falls into the liver for detoxification and everything that is introduced parenterally (bypassing the gastrointestinal tract: subcutaneously, intramuscularly, intravenously and t.NS.). The liver also neutralizes toxins formed within the body itself. To ensure the detoxification function in the liver, a large amount of biochemical reactions occurs, as a result of which neutralized toxins can be safely excreted from the body with urine or bile.

In disruption of the detoxifying function, the accumulation of toxins in the liver leads to their entry into all organs and tissues. There are signs of intoxication: weakness, lethargy, violation of attention – manifestations for which they usually do not pay attention to, written off on asthenic syndrome and greater loading at home and at work.

Often in this situation the surrounding people recommend a person – «Cleaning the liver». Looking at the means and products offered for such a procedure (sorbitol, magnesia, vegetable oil, lemon and t.D.) It is not difficult to note that these drugs do not have any action on the liver itself. Their action is directed exclusively on the bile system: they enhance the release of the already formed bile and stimulate the emptying of the gallbladder. But those toxins that stand out through bile are already neutralized, and unreleased toxins in bile can not. In addition, the main endogenous toxin – Ammonia, which is formed during the breakdown of the protein, is not excreted via bile, but in the composition of urea with urine. Thus, «Cleaning the liver» It will not help the normalization of the detoxification function of the liver. 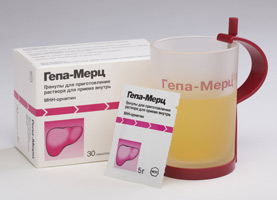 What to do in such cases? First – help liver in detoxification. Second – contribute to the restoration of their own detoxifying function. During the day in an adult, about 100 g of protein decays to ammonia. There is not a single toxin that could be compared in normal conditions in the speed of education and disposal with ammonia. Ammonia is included in the liver into the ornithine cycle, and urea is urged, which is separated from the body with urine. In chronic liver diseases, regardless of their origin, the detoxification of ammonia is broken, and the main manifestations of a decrease in the detoxifying liver function are precisely due to a large extent an increase in ammonia concentration. In this situation, the original German Gep-Merz preparation is shown, consisting of two amino acids: ornithine and aspartate, which increase the inclusion of ammonia into an ornithine cycle and reduce the manifestations of intoxication: weakness, reduce performance and disruption. As shown in clinical studies, the use of Hep-Merz contributes to the normalization of various functions of the liver and improves the quality of life of patients.

There are contraindications. Before use, consult your doctor.

Summer hepatitis A, or «Disease of unwashed ...

Inadequate behavior as a symptom of mental ...