A few words about leptospirosis

What is leptospyrosis? What are the symptoms of leptospirosis? How long does the incubation period of the disease last? How diagnostics and treatment of leptospirosis? Answers to these questions you will find in the article.

Leptospirosis is a group of infectious diseases caused by leptospirms (Leptospira Interrogans) - minorganisms from the spirochet family. A variety of subtypes of leptospyr, capable of causing diseases in humans.

The most famous leptospirosis are:

Leptospirosis
Many wild and domestic animals are found, some of which
are its carriers and excrete bacteria with urine.

IN
particular source of yellow leptospirosis in nature are rats,
And the aquatic fever is small miley rodents, as well as sheep, goats,
Pigs and cattle. Therefore, leptospirosis is
Professional disease workers of agricultural farms
and scott, deratizers and t.D.

Infection is possible when bathing in polluted water.

Most often outbreaks of leptospirosis occur at the later summer and early autumn. 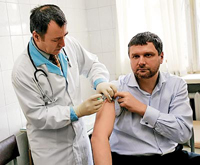 Incubation
The period is from 2 to 20 days. The disease begins with increasing
Temperatures, headaches, strong pain in the muscles, especially
ionic, chills.

In 10-15% of cases, cough develops, sometimes with blood. For 3-4 days, acute epidemic conjunctivitis is developing.

Chills
and temperature rise to 38-39°With continue up to 4-9 days. Then
The temperature decreases, but it is again between 6 and 12 days of the disease
rises. At this time, brain-shell inflammation develops -
meningitis that can go to whom.

In case of waila syndrome -
Heavy form of leptospirosis - a decrease in blood coagulation,
what can lead to heavy bleeding. On the 3-6th day develops
Liver damage (therefore the disease got the name of the jaundice
leptospirosis), spleen and kidneys, which is accompanied by the appearance of blood
In the urine (hematuria).

In a pregnant woman, leptospirosis can lead to miscarriage.

Diagnosis and treatment of leptospirosis

Diagnostics
Conducted by sowing blood, urine or cerebrospinal fluid.
However, since the leptospiirs on nutritional environments grow slowly,
Etode method suitable only for retrospective diagnostics. Quicker
The answer gives an analysis on antibodies against blood leptospir. Great
The value in the diagnosis has a clinical picture and epidemiological
situation.

Antibiotics prescribed for treatment,
Disinfection therapy. Control blood coagulation, functions
internal organs. In the insulation of patients there is no need because
from person to man leptospirosis is not transmitted.