Millions of people died during the epidemics of the plague. It is curious that most of them were poor. And what is the connection between poverty and plague, you will learn from this article.

Plague - Acute infectious disease caused by Bacteria Yersinia
Pestis and manifested in two basic forms - bubonic and pulmonary. IN
The nature of the plague is common among rodents, from which transmitted
man. The outbreak of bubonic and pulmonary plague, the most terrible of those known in history
epidemics spreading in Europe in the period from 1347 to 1351 and
then every few years already with less intensity
Repeated.

Scientists again turned to the study of the remains of the dead during the epidemic of the plague in the middle of the XIV century. The analysis of the bones showed that only the weakest died from her, and therefore use the plague graves to study «Sleep» society of the time of the epidemic can not.

«Black Death» - A pandemic of the bubonic plague listed from China and who passed throughout Europe in the XIV century may not have been so merciless. Moreover, the death rate from the plague ranged from 27 to 95%, researchers believe now that the disease was not dangerous for everyone and «Spacious» Only those who initially had weak health.

Until now, experts believed that the risk of becoming a terrible disease, with the victims of which in five years from 1347 to 1351 were about 75 million people, was high for all in contact with patients or lives in unsanitary conditions. Scientists believed that the immune system of people did not have time to respond to an infectious disease in time, so the disease could manifest itself in a person of any age, gender, well-being and even health.
However, new data show that it is not. 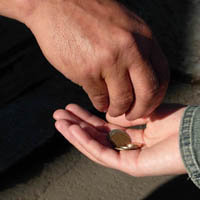 «The number of victims during a pandemic allowed scientists to say that the plague killed everyone, but in fact it is not a completely correct statement. The risk of getting sick even in the context of the spread of such terrible ailments of each person is individual», - Noted by the author of the last study of Sharon Devitt, a biological anthropologist from New York University of New York in Albany.

In the framework of the study, Devitt and her colleague James Wood from the University of Pennsylvania, analyzed the remains of 490 bodies, previously resting on the cemetery East Smithfield Black Death, London, which was built specifically for the victims of the plague. In the 1980s, the cemetery of perkali, all buried bodies were exhumated, and the bones were purified and prepared for further research.

Now the American researchers who studied the remains were interested in their possible defects - holes, damage or deformities that would indicate the general physical weakness of a person. To obtain more accurate results, the researchers compared the remains of London clumsy with the remains of people buried on other cemeteries immediately in front of the pandemic. Mostly, Demitte and Wood wondered the age of the deceased. In addition, researchers calculated the connection between bone injuries and the risk of perishing as a result of these defects.

It is clear that among people who died to the plague, many have found signs of a common painful state. In good health and from random causes people died less. However, the relationship between the weakened state of health and mortality was observed among the victims of the illness.

Patients who suffered from obvious injections and shortcomings of the skeleton, and to the plague, more often healthy came to the cemetery, but one who at the time of the epidemic had already had weak health, with a greater probability infected with a bubonic plague and remained behind the fence of the cemetery of East Smithfield Black Death. In addition, as scientists believed, weak health people died more often, since poor nutrition made a threat to the possibility of their immune system to deal with the disease.

«The assumption that «Black Death» killed people with already weakened health, not meaningless, - Devitt noted in an interview with Reuters. - Now we have confirmed quantitatively evidence that the bubonic form of plague, swept over Europe, did not destroy everyone without parsing».

According to historians, «Black chum», which originated in China in 1334 and then spread to the West, passing through France, Spain, Norway, Schleswig Holttein, Jutland and Dalmatia, Germany, Poland and Russia, carried almost 75 million people, while only in European countries passed 34 Million. The results of scientists in the root change the approach to research on the lifestyle of people who have made a terrible pandemic.


Earlier it was believed that on the remains of worried, a full-fledged analysis of the Society of the XIV century can be carried out. This approach was explained Simple: almost any member of society could be the victim of the plague, it means that the study of these remains will give the opportunity to see the entire social variety of that time. However, the current work eliminates the possibility of conducting such studies: the study of such burials will be able to indicate only the most vulnerable and sick representatives of medieval cities and villages.

Thus, on the London cemetery, the number of extremely unhealthy people, which, and without the presence of bubonic plague, should inevitably and quickly die, according to scientists' estimates, much exceeded the number of buried, whose death was dictated by the infection of a terrible disease.

«Now there are many diseases that can potentially spread throughout the light. There are concerns that diseases will affect all people, and everyone has absolutely identical chances to get infected. Knowing that in such a situation there are people susceptible to more than the rest, risk to get sick, we can create conditions in which the danger to die from the illness for these people will be reduced», - summed up Devitt.