Mopathic - diagnosis of serious. In this article, the practitioner tells about the types of this many-sided disease. 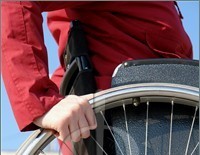 «We are three brothers (31 years old, 29 and 27 years old) - with adolescence I suffer from one disease - progressive muscle dystrophy. All three - disabled. Maybe the specialists will be repaid on our misfortune and help.»

«In a child (10 years old), the progressive muscular dystrophy Duceda. Doctors powerless. I will be grateful for any recipes, tips.»

«The grandson (3 years) suddenly began to deny legs and over time it gets worse. Doctors put different diagnoses and can not do anything. Help good advice.»

These are excerpts from letters of people who collided with such a serious illness as myopathy. What is myopathy? Let's try to classify this multi-chart.

Myopathy and its types

Moopathy represent a group of neuromuscular diseases that manifest themselves fatigue, weakness of muscles, a decrease in muscle tone, muscle atrophy. Moopathy, depending on the causal factor, is divided into progressive hereditary muscular dystrophy, endocrine myopathy (diseases of the internal secretion glands) and metabolic myopathy (metabolic disorders).

Talk about the progressive hereditary muscle dystrophy. This type of myopathy is characterized by muscle atrophy due to the destruction of muscle cells due to a disadvantage of a special protein, which strengthens the structure of muscle fibers. This protein is produced under the control of a special cell gene, which is located on the 6th Human Chromosome, and during the defect of this gene comes the gradual destruction of muscle cell shells, followed by casting muscle fibers.
This defective gene is inherited if there was marriage between relatives. Gene changes in 30% of cases occurs as a result of mutation, that is, in these cases, marriage between relatives - neither. The disease is inherited with a 50% probability, if one of the parents of the child is sick. It is associated with the female sex chromosome and is transmitted, as a rule, sons, although women themselves may not hurt. Atrophy the muscles of the shoulder belt hands, back, pelvic belt and legs.
Depending on the localization of the disease, age, the severity of the diseases allocate various forms of muscle dystrophy. So, the Youth Form of Erba Rota occurs at the age of 10-20 years, when atrophy of the muscles of the shoulder belt and hands appear imperceptibly, and then - the pelvic belt and legs. While walking the patient, the abdomen and twisted back of the chest. To stand out of the position lying, the patient turns on his side and, leaning his hands on the hips, gradually raises his body. The disease slowly progresses.
Children's form of muscular dystrophy of Duceda begins at the age of 3-5 years with atrophy of the muscles pelvis, hips with the simultaneous thickening of the oscraconal muscles of the leg (false thickening). Gradually atrophy muscles of shoulder belts and hands. Children initially disturbed gait, and then arises difficulty in movement. Many have a heart rate due to an increase in heart size. The progression of the disease or its malignant flow due to early immobilization of the limbs leads to a sad outcome. They are sick, mostly boys (1 for 3000 born). To be more accurate, the men and women are also sick. Only Dosene's disease manifests itself in boys. Girls are carriers of this gene.
But it happens and benign for muscle dystrophy (becker miodastrophy), when the disease manifests itself slowly, especially in low-spirited children. For many years, they retain a satisfactory physical condition and only the accession of various acute diseases and injuries leads them to immobilization, depletion with a bad outcome.
The shoulder-impact-facial form of miodyatrophy, called Landuzy-Dezhard, which can be aged 6 to 52 years old (more often in 10-15 years) and is characterized by the defeat of the muscles of the face with gradual subsequent atrophy of the muscles of the shoulder belt, torso and limbs. Early signs of the disease are poorly closed and unclosed eyelids, fully closed lips, which creates a fuzzy speech and the impossibility of inflating cheeks. The disease proceeds slowly. For a long time, the patient can move and maintain ability to work, and then after 15-25 years, the muscles of the pelvic belt of the legs are gradually atrophized, which makes it difficult to move.

A group of secondary progressive muscle dystrophy is also allocated, which arise in connection with the damage of the nerves: neural, spinal miodastrophia, called still amyotrophy.

Congenital spinal muscular atrophy of Kugelberg-Vallanger is characterized by gradual atrophy of the muscles of the hands, legs, retardation of mental and physical development, deformation of the spine. The disease is manifested at the age of 8-10 years and slowly progresses.

The progressive Ayotrofony of Aran-Duzhen begins at the age of 25-50 years and manifests the muscle atrophy of the brushes. Then the rest of the hands are gradually atrophized, then the feet of the body, in T.C. intercostal muscles, which causes respiratory disorders from which death comes.

Congenital amiotonia (reduction of muscle tone) oppenheim is characterized by the weakness of the muscles due to their underdevelopment, and their muscular dystrophy is secondary. In the newborn, it does not progress, but the ingress of respiratory infections can cause inflammation, and death comes in the first year of life. With age, muscle motor function improves.

Treatment of muscle dystrophy is aimed at slowing the dystrophic (destroying) processes in the muscles and even their termination. However, radical treatment has not yet been found. Although hope is on the genin therapy, which begins to slowly implement into medical practice.