Treatment of acute radiation sickness begins with the use of symptomatic agents that are aimed at the struggle of the first manifestations of the disease. In order to prevent the development of infectious complications, antibacterial therapy is prescribed. The forecast of the disease depends on the dose of irradiation.

Currently, in most cases, the diagnosis of acute radiation disease is not difficult. Characteristic symptoms of primary reaction, as well as temporal characteristics of changes in levels of lymphocyte, leukocytes, blood platelets make diagnostics not only error-free, but also accurate relative to the severity of the process.

Chromosomal analysis of bone marrow cells and lymphocytes in the picture of blood allows you to clarify the dose and severity of the lesion immediately after irradiation and retrospectively, in months and years after irradiation. For example, when the bone marrow region is irradiated at a dose of more than 500, the frequency of cells with chromosomal disorders is almost equal to 100%, at a dose of 250 rad - about 50%.

Methods of treatment and prevention of acute radiation disease, clinic 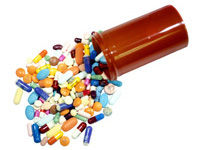 Treatment of acute radiation sickness strictly corresponds to its manifestations. Treatment of primary reaction has a symptomatic nature, so vomiting is stopped by the use of antihist drugs, the introduction of hypertensive solutions (with non-corrosive vomiting), with dehydration, it is necessary to introduce plasma-proof.

To prevent the development of patient infections, isolate and create maximum aseptic conditions (boxes, ultraviolet air sterilization, the use of bactericidal solutions). Treatment of bacterial complications should be urgent. Before the detection of the causative agent of infection, the antibiotics of a wide range of action using penicillin, streptomycin, kanamycin, lincomycin, etc. Antibiotics introduce intravenously 2-3 times a day. When establishing the causative agent of infection for antibacterial therapy, drugs that are valid are used.

In the treatment of intestinal lesion, a full hunger is appointed before eliminating the symptoms of the defeat (usually about 1-1.5 weeks), only water is allowed (but not juices), with a long starvation, careful care of the oral mucosa can be prescribed, careful care for the oral mucosa (rinsing ).

To combat violations in the blood formation system, platelet transfusion is necessary. At the hemoglobin level below 83 g / l in the presence of signs of acute blood loss, the transfusion of erythromass is shown. With an inappropriate application of erythromass, the condition of the victim may be aggravated due to radiation lesion of the liver, as well as provoke heavy bleeding.

After the elimination of all pronounced manifestations of acute radiation disease, patients are recovering. With light and medigative lesions, the recovery is usually complete, although a moderate asthenia may remain for many years. After a suffered severe disease, a pronounced asthenia is preserved usually long. In addition, such patients threaten the development of cataracts (closet of eye lens). The appearance of cataracts due to the dose of the effects on the eyes of more than 300 is glad. At a dose of about 700, heavily damage to the retina, the eyemination on the eye-eye period, the increase in intraocular pressure is possible, possibly with the subsequent loss of vision in the affected eye.

After an acute radiation disease, the change in the picture is not constant, there may be a stable moderate decrease in leukocytes and platelets. The appearance of coarse changes in the blood in the form of a pronounced decrease in all blood cells or, on the contrary, increase their number, which indicates the development of a new pathological process (anemia as an independent disease, leukemia and T.NS.).