What are the types of wounds? How to give first aid when a man's wound? Answers you will find in the article.

What are the wounds

There are superficial and deep. With surfaces, the integrity of the skin and mucous membranes is disturbed, deeply accompanied by damage to vessels, nerves, bones, tendons. Wounds penetrating the cavity (abdominal, chest, cranknaya-brain) are called penetrating. Distinguish them depending on the nature of the wound object.

Bleeding depends on the type of vessels damage (artery, vein, capillaries), blood pressure height and wound nature. When cut and chopped wounds, bleeding is most pronounced. In the well-metered tissues of the vessels crushed and thrombourned. So bruised wounds are little bleeding. Some exception is the wounds of the face and head. In their soft tissues there are extremely many capillary vessels, so any wound of the head is accompanied by significant bleeding. 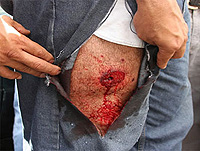 The reason for most deaths after injury is the sharp blood loss, so the first events should be directed to stopping bleeding in any possible way: harness, pressing the vessel, the pressing bandage, etc.

Wound protection against pollution and infection. Wound processing should be pure, better disinfected, hands. Do not touch the hands of those layers of gauze, which will directly touch the wound. In the presence of disinfectants (hydrogen peroxide, furaticiline solution, iodine tincture, alcohol, etc.), before you impose a aseptic bandage, it is necessary to rub the skin around the wound 2-3 times with a piece of gauze or cotton wool, moistened with an antiseptic, trying to remove the mud, scraps, ground from the skin surface.

Winal can not be washed with water - this contributes to infection. Can not be allowed to enter the migrational means directly to the wound. Alcohol, iodine tincture, gasoline cause death damaged cells, which contributes to the wound suppuration, and a sharp increase in pain, which is also undesirable. Foreign bodies and dirt from the deep layers of wound should not be removed, since it leads to even greater infection of the wound and may cause complications (bleeding, damage to organs).

The wound can not be filled with powders, put an ointment on it, it is impossible to apply your wool directly on the wound surface - all this contributes to the development of infection. Sometimes internal organs may fall into the wound (brain, intestines), tendon. When processing such a wound, you can not immerse the fallen bodies into the wounds, the bandage is applied on top of the authorities.

An important task of first aid is the wounded is the speedy delivery of them into a healing institution. The earlier the victim gets medical assistance, the more effective the treatment.