Pain in the neck

What happens when the neck sores? How the neck is arranged? What are the causes of pain in the neck? Learn more about the disease!

The main thing is why the disease begins, is the loss of elasticity of intervertebral cartilage disks. Discs dry, decrease in size and can no longer respond to the load on the spine, devoid of its depreciation properties. Muscles, bundles, vessels, nerves suffer.

Significant changes undergoes the bone structure of the spine. Squeezing nerves and vessels, spastic (spasm - compression) and inflammatory changes in them lead to a violation of blood supply to the brain and the nervous regulation of internal organs.

Genuine name of the enemy of all mankind - osteochondrosis. And he is always chronic disease. Translated from the ancient Greek, Osteon - bone, Chondros - cartilage. Osteochondrosis - disease of the bone and cartilage.

What is an intervertebral disk 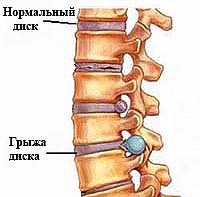 The vertebrae is connected to each other round cartilaginous gaskets tightly and at the same time elastic, so the spine remains moving.

If you look at the disk from above, it resembles a hydraulic shock absorber in miniature. The intervertebral disc appearance is similar to a playing checker: on the periphery ring fiber coarse fiber, very strong cartilage tissue, and in the center on the cut sputs the semi-liquid cartilaginous substance. She sputs because, located inside the disk between the bodies of adjacent vertebrae, is under pressure all the time. The human spine is similar in the structure of the animal spine.

The difference is that we go to two legs and the vertical position of the body increases the load on the intervertebral disk.

Disk fastens the vertebrae almost motionless, but «Verty» We are muscles - neck, backs, loins and even the abdominal press, the tone of which controls the position of the spinal column. True, the spine itself contains an additional shock absorbing device - own form.

Several so-called physiological bends - cervical lordosis (bending ahead), chest kyphos (bending the seat, as if light hump) and lumbar lordosis - create a spatial structure in the form of a vertical S-s-spring, which softens vibration, strong blows. With an increase in the load on the spine axis, for example, when lifting the cargo, jumps and t. NS., The force is evenly distributed in the semi-liquid core of the disk, stretching dense fibrous rings by its periphery.

But this is not all! Disk - not a simple shock absorber, but with variable rigidity, as on the most expensive modern cars. When the load is gained at the intervertebral segment, the drive swells - its thickness and elasticity increases. Thus, even a strong blow or load is quenched and amortized as «Spring» spine and intervertebral «Hydraulic». But years are going... 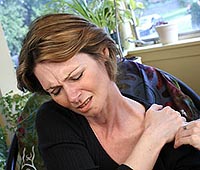 Man ages not only outwardly, but also internally. You may note that the first wrinkles appeared, but do not yet know what changes are happening with the spine. And they are also inevitable.

The intervertebral disc does dry, it becomes thinner, its «Hydraulic» Pulpose kernel loses water and no longer extinguishes oscillations and blows. At the same time, ring fibers are made with flabby, fragile, do not provide dense, elastic vertebral fixation, may even break.

Sometimes a semi-liquid pulpal kernel is added to such a break (the central part of the disk, core), forming the so-called disk hernia. She can surpose the nervous root passing nearby - from here and severe pains, radiculitis (from Latin «root»). Pains are unbearable, but still not the most terrible complication of osteochondrosis.

Worst of all - the instability of the spine, that is, the excessive mobility of the vertebrae. Looking, they can, depending on the degree of illness, cause squeezing the blood vessel or pinch the spinal cord or its appendages. The spine deals its main function - support.

Fortunately, such complications happen too often. Most often found a clearly pronounced picture of the disease with non-leaving chronic pain, due to even without infringement of the root, but by constant muscle spasm. The reason for it is again discoible - the vertebra is as if tired, overloaded, the disk is flattened, poorly shockped loads, vibration, and the like. It becomes the cause of pain, first, possibly insignificant, tolerant, which, however, cause a constant increase in muscle tone.

The body seems to try to protect himself from the pain of the muscular corset. But from constant tension arises spasm, the muscle is depleted, its strength falls, the blood supply to the intervertebral disk (it goes through the muscles, too) deteriorates - such is a vicious circle!

Mood is spoiled from permanent pain and neurosis can even develop. Sometimes join brain circulation disorders (notorious vegetative-vascular dystonia). Everything rolls out of the hands, the troubles begin at work... We were so detailed on a honeymaking picture of the development of osteochondrosis because each person should not simply mechanically perform the prescriptions of the doctor, but to know what happens to him, from which the disease is developing, what is the cause.

When it intelligently performs all the necessary procedures, he knows what changes occur during treatment, it becomes an ally of the doctor, which means how the ancient said, two are already fighting against the disease - the doctor and the patient himself.

But, fortunately for them, our smaller brothers are spared from the troubles that I just told. Animals do not suffer from osteochondrosis, so it is difficult to study the disease in the experiment. Paleontologists, who studied the remains of our ancient ancestors, found traces of osteochondrosis already with the advent of Homo Erectus - a man of an open (straightened) - it happened several hundred thousand years ago. Thus, it can be argued that, as well as flatfoot, osteochondrosis of the spine - fee for going on two legs.

In people aged 70-80 years, osteochondrosis, as a rule, is found in 95-100 percent of cases. However, pain and other clinical manifestations of the disease occur only in 30-50 percent of patients.

It is important to recognize osteochondrosis as early as possible

Sometimes, with an x-ray examination, all signs of osteochondrosis are detected, but the person does not have any unpleasant feelings. But it happens x-ray disease disease does not show, but a person suffers. This is explained by the fact that the intervertebral disk, muscles, nerves, vessels and a spine verteber, changes in which radiologically not detected are damaged.

Most often found a pronounced picture of the disease with continuous chronic pain, due to even not infringement of the root, but by constant muscle spasm. The reason for it is again discogenous - the vertebra is as if tired, overloaded, the disk is flattened, poorly tolerates load, vibration and long seat in one pose. And even if the spine does not bother you and there are no obvious pain symptoms, listen to yourself!