What does scarletine rash look like - diagnostics at home

Let's talk about how Scarlatina looks like. Diagnostics at home does not exclude a doctor call, but you need to know the signs of scarletin in children. In Articles in detail about what is a scarlatographic rash. 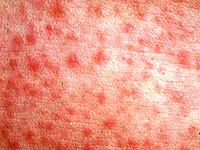 The rash on the skin of the child always causes the concerns of the parents, and it is not by chance, because it may be associated with very dangerous diseases. The cause of the rash can be both banal hygiene defects of the skin and allergies, infectious and parasitic diseases, diseases of blood vessels and blood. It is necessary to have at least general ideas about how the rash looks like with all these diseases, after all, the specks, tubercles and acne on the body of the baby can tell a lot about the reason for the ailment and suggest ways to fight.

Let's talk about how Scarlatina looks like. Diagnostics at home does not exclude the doctor's call, but allows you to judge the need for emergency measures, because in some cases the disease poses a child's life.

Scarlet fever — acute infectious disease caused by the hemolytic streptococcus group A. Basic signs of scarletin in children: temperature rise, weakness, sweating, headache, swallowing and throat pain, the appearance of finely purified rash. The pathogenic effect of streptococcus is so large that Scarlatina may be complicated by glomulonephritis, chronic tonsillitis, rheumatism, myocarditis and other very serious diseases.

Source infection — The sick person, at the same time it is not at all necessary so that he suffers from scarletina, it can be an angina or pharyngitis. «Patch» Pathogenic streptococcus can be even from externally healthy people, but the disease will develop in the event that there are no specific antibodies in the child to streptococcus.

An air-droplet infection is transmitted when talking, sneezing, cough, contact by contact with common utensils, household goods and toys.

The incubation period of the scarletin is on average from one to ten days. During this period, the child feels fine, but already represents the danger to others.

The beginning of the disease is sharp: body temperature rises to 39 0C, severe sore throat appears, swallowing, nausea and even vomiting appears. In bright-red pharyngeal almonds, purulent raids are becoming noticeable, the language is covered and looks like swelling, submandibular and cervical lymph nodes increase. It would seem that the picture of the usual angina is obvious if it were not for one «but» — Rash on the tele. She changes everything, and the symptoms of banal angina MiG turn into the first signs of scarlet. In children aged two — Eight years, any angina must cause suspicion as a possible symptom of scarlet. 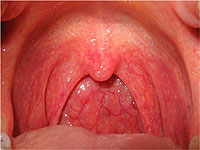 Scarlantine rash usually appears on the first day, at first it can be seen on the neck, in the area of ​​the axillary depression, in groin and on the back. Gradually, it applies to the face, the inner surface of the elbow folds and hips, in the popliteal areas, and then «scattered» throughout the body, including the palm surfaces of the brushes and the plantar surfaces of the stop, but excluding the nasal triangle, which remains a pale spot against the background of general red. It is typical that throughout the disease, where the rash appeared initially, remain the most outstanding. Separate elements merge with each other, forming on the folds of the skin and in the joints of the joints of the crimson.

Scarlatinous rash has a bright red color, it was he who gave the title of the disease «scarlet fever», What happened from the word «Scarlet» — purple. The skin of a child, a sick scarletina, looks completely red, but at closer examination it becomes clear that the rash consists of separate tiny specks, the size of one or two millimeters, and the color of each spubby in the center is more intense than on the periphery. If you spend on the skin a stupid object, the rash pale and disappears, but after a while it appears again. To the touch, the skin of the baby resembles sandpaper, it is rough and dry. At the same time, the rash is very complicated, and itching provokes the appearance of combs.

Rash on the skin kid may differ from what scarletina looks like. Diagnostics should take into account all options. Miliary rash, Roseolese-Papulse rash, hemorrhagic rash — All these atypical elements can exist on the skin of the child at the same time as typical red dots.

Skarlatina rash remains bright for three days, then starts pale and the seventh-eighth day completely disappears. At the same time, the body temperature is reduced, the symptoms of intoxication goes. The tongue is cleared on the fourth day and becomes raspberry-red, on its surface, swelling pale flavoring papillars are distinguished, and such a picture is preserved for another two weeks.

After disappearance, the skin of the baby begins to peel. On the cheeks and on the forehead, dead epidermis disappears with small scales, on the body — Small plates, with palm surfaces, leather is removed by the type of gloves. This is an important sign of scarlet.

The appearance of a rash on the body of a child, especially if it is accompanied by an increase in temperature, should serve as a signal to call a doctor to the house. It is impossible to drive a child in the clinic, because on the road he will be infected with a dozen kids. Knowing signs of scarletins in children, parents will be able to prevent the spread of infection.