Any disease is easier to warn than to treat. Meningitis is no exception. There are several types of prevention, ranging from vaccinations and ending with banal observance of personal hygiene rules. Read more about ways to protect yourself from meningitis, read in the article.


Meningitis (from Greek. Meninx - brain shell) - inflammation of the shells of the head and spinal cord. Meningitis can be caused by various viruses and bacteria, and even fungus. The optimal method of prevention of meningitis is determined by age, health status and the environment. Unfortunately, there is no universal means of protection against this dangerous disease, but vaccination and compliance with reasonable precautions will help reduce the risk of disease.

Nobody insured against the disease meningitis of various types. But medical studies have shown that some age groups are subject to greater risk of the disease, in particular:

Studies have also shown that some diseases or disorders (for example, a separation of spleen, chronic diseases or diseases of the immune system) increase the predisposition to meningitis.

Since some manengitis causative agents can be transmitted to others, outbreaks of the epidemic of this disease are most often observed in the places of dense accumulation of people. Thus, students living in a hostel, and soldiers living in barracks are susceptible to increased risk of meningitis. However, even if you have found one or more risk factors, it does not mean that you will certainly get sick, because meningitis is a rather rare disease. 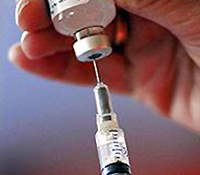 Vaccination helps prevent many diseases that can lead to meningitis. Most often vaccinations against meningitis make children at an early age. Here are the main vaccines preventing the occurrence of bacterial and viral meningitis:

Vaccine against hemophilic stick type B, preventing infections that cause inflammation of light, meningitis and other diseases. This vaccine is introduced to children aged 2 months to 5 years, as well as children over 5 years old, suffering from certain diseases. Previously, these bacteria were considered the most common causative agent of bacterial meningitis, but thanks to this vaccine, such cases were rare.

Meningococcal vaccine protects from the main pathogens of meningitis causative agents. Usually it is injected with children aged 11-12 years. This vaccination also recommends first-year students living in a hostel, recruit soldiers, patients with certain diseases of the immune system, as well as tourists traveling to countries where meningitis epidemics periodically arise, for example, in some African countries.

Vaccinations against other diseases are also considered to be preventing meningitis. Triple vaccine against measles, epidemic vapotitis and korea rubella are usually administered to children. It protects against meningitis, which may arise as a result of measles and core rubella. Vaccine against windshield smallpox is also important, since the infection of the wind sperm can potentially lead to a virus meningitis.


Other types of prevention of meningitis

In addition to vaccination, doctors recommend using the following means for the prevention of meningitis: