Recently, the ulcer of the stomach in children is becoming increasingly. As a ulcer in children proceeds? The symptoms of this disease very important to know all parents, because early diagnosis - half of success in the treatment of stomach ulcers in children. 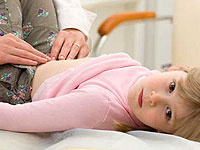 «Your child has a gastric ulcer», Such a diagnosis is increasingly heard by parents of schoolchildren. Fast food, semi-finished products, carbonated drinks, eating arm, lack of full rest, constant overload playing a role. Violation of the vegetative nervous system, the infection of the helixobacter, decrease in the production of gastric mucus neutralizing hydrochloric acid, slowing the regenerative processes with the increasing influence of the factors of external aggression and increase acidity leads to the fact that the child is formed ulcers. In children, the symptoms of this pathology do not differ from the clinic of the disease in adults.

Georny stomach disease in children — Chronic disease characterized by stadium flow and alternation of exacerbation periods with damping periods. Doctors, it is customary to talk about the clinical picture of ulcerative disease, connecting the external manifestations of the disease so that it is possible to detect when endoscopic examination.

For what signs you can judge that an ulcer formed? In children, the symptom number one is pain in the stomach. The pain appears on an empty stomach or 2-3 hours after meals, sometimes there are nightaches. In general, you can reveal a clear dependence of pain from meals: hunger — Pain appearance — Meal — Reducing pain.

In addition to the painful child's pain is worried about heartburn, nausea, belching with acidic contents of the stomach, against the backdrop of peptic illness, constipation often occur.

Already at this stage of development of the disease, it is possible to detect the pain and tension of the muscles of the front abdominal wall.

In an endoscopic study, inflammation of the gastric mucosa is found in the gastroduodenal zone, that is, at the point of transition of the gastric in the duodenum, the defects of the mucous membrane or oval shape (ulcers) are visible, which are surrounded by an inflammatory roller and coated with a fibrin of gray-yellow or white.


The second stage of the ulcer of the stomach in children

This stage of the disease is characterized by the beginning of epithelialization, that is, healing of the ulcerative defect mucous membrane.

Pains arise mainly during the day and stop food, night pain is not typical. The nature of pain, pain becomes stupid, muted, but. The child already allows you to feel the stomach, soreness and tension of the muscles of the abdominal wall is detected only at deep palpation. Less worried heartburn and belching.

With endoscopy, the doctor detects sinking inflammation, the stomach mucosa becomes less red and edema. The inflammatory shaft around the ulcerative defect is flattened, its bottom is cleaned, the ulcer is tightened, which reflects the beginning of the healing process.


Third stage or healing of ulza

Pains are saved only on an empty stomach, at night are missing or their equivalent becomes «sucking under the flag», similar to the feeling of hunger. The stomach is soft, there is no stress of muscles, but with deep pricking, some soreness in the epigastria is preserved. Heartburn, nausea, no belching.

At endoscopy, traces of ulcers are visible in the form of a red scar that can have the most different shape. Some signs of inflammation of the gastric mucosa are preserved.

The child feels good, does not present complaints, does not show out anxiety when belly feeling. With endoscopy, no pathology is detected, the picture of the stomach ulcers in children in the remission stage is no different from the norm. The only one, in the study of the acidity of the gastric juice, a persistent increase is found, which means that the threat of the formation of a new ulcer is preserved.


Complications of ulcerative disease in children

It must be said that complications of ulcerative disease in children are quite rare, in 8-9% of cases, 2 times more often in boys. Most often ulcerative bleeding arise, and with a duodenal ulcers, they develop more often than with a stomach ulcer. Punching of ulcers, that is, breakthrough the walls of the organ, accompanied by «Kinjal» pain and shock ranks second. In the third place, the penetration of ulcers, that is, its germination into neighboring organs, it happens mainly in the launched cases in the absence of adequate therapy. In general, the forecast of ulcerative disease in children is favorable with sufficient attention to the problem.