Phenylketonuria is a congenital disease. In the majority of untrenented patients, the disease is manifested by one degree of mental retardation. What is phenylketonuria? Read about it in the article. 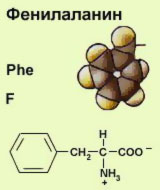 Phenylalanine refers to indispensable amino acids (substances that go to the construction of proteins in the human body), since animal fabrics are not capable of synthesize. In the human body, where phenylalanine falls with food, the process of its oxidation is under way using the specific enzyme phenylalannine hydroxylase to a completely replaceable amino acid - Tyrosine. Violation (blocking) of this reaction, observed in violation of the synthesis of phenylalananinhydroxylase in the liver, leads to the development of severe hereditary disease - phenylketonuria.

Tyrosine is used by the body for the synthesis of thyroid hormones. And melanin, tyrosine and phenylalanine derivative, provides pigmentation (color color) of the skin, eyes and hair.

Phenylketonuria is also called phenylalaninemia, phenylpyrogradna oligophrenia. The disease relates to congenital metabolic disorders (metabolism), is characterized by an increase in the level of phenylalanine in blood plasma and is accompanied by mental retardation. The exact cause of mental retardation in phenylketonuria is unknown, but it is a consequence of a biochemical defect. The hereditary nature of the disease is found in most people. The frequency of occurrence of FCU is 1 case by 6000-10000 newborns.

Clinical symptoms of phenylketonuria in newborns are usually absent, so laboratory screening should be carried out (diagnostics). In rare cases, lethargy is noted and difficulty. In the majority of untreneable patients, the disease is manifested by one degree of mental retardation (more often pronounced), which is the main symptom of phenylketonuria. Usually patients with brighter skin, hair and eyes than their healthy relatives. Some children may have skin changes that resemble infant ecase.

For patients with phenylketonuria, abundant neurological symptoms are characterized, reflexes are especially changed. In older children, both large and small epileptic seizures are noted, deviations on the electroencephalogram are noted in 75 - 90% of cases. A pronounced increase in activity and psychosis develops, often from patients comes unpleasant "mouse" The smell caused by the presence of phenyloxic acid in the urine and sweat.

After the newborn received milk (the source of phenylalanine) for at least 48 hours, the doctors conduct a screening test on phenylketonuria (examine blood drop). At the age of 4 - 6 weeks, the product of the decay of phenylalanine can be revealed in the urine of the patient. At this time, one more screening test on phenylketonuria is carried out. The blade is carried out after the end of the newborn period, and children from families where there is a patient phenylketonuria, it should be regularly repeated during the first year of life.

Physician treatment should be held from the first days of life. Only early and consistent treatment prevents the defeat of the central nervous system and severe mental retardation. If the treatment has begun after 2-3 years of life, it can only be limited to pronounced increased activity and facilitate the course of convulsive syndrome.