For rehabilitation of children with cerebral palsy, bobat therapy is used. What is this method?

Significant contribution to the development of rehabilitation methods of cerebrals was made by Berta and Karel Bobat. Back in the 40s of the 20th century, they began to develop their approach, which was based on clinical observations Berta Bobat. Their views were influenced by the existing theory of the theory of reflex and hierarchical ripening of the nervous system. Thanks to its publications, lectures and courses that were intensively conducted as they personally, and their students, the Bobat concept, also known as «Neuro-developing therapy» (Neuro Developmental Treatment, NDT) widely spread throughout the world and had a significant impact on the general development of the principles of rehabilitation of children with cerebral palsy after World War II.

According to Bobat, motor problems with cerebral paralymps arise due to the defeat of the central nervous system. In this case, the development of postural anti-gravity mechanisms is disturbed, the normal motor development of the child slows down and distorts.

The purpose of reducing treatment

The purpose of the restoration treatment of these children is the stimulation of normal engine development and the prevention of contractures and deformations.

The neuro-developing approach of the Bobats was aimed at the sensing components of muscle tone, reflexes, pathological motor models, postural control, senses, perception and memory - that is, those ingredients that are most likely to be disturbed by damage to the central nervous system.

The basis of the Bobat therapy approach 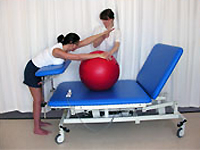 The basis of the approach was to apply special positions of the body of a child, the care techniques for him, which controlled sensory incentives to the nervous system. They were used both to reduce muscle spastic, pathological reflexes and pathological motor models, and to create a normal muscle tone, equilibrium reactions and proper motor models. The child was a relatively passive recipient of neuro-educational treatment. The normal sequence of motor development was considered one of the main theoretical postulates.

Over time, thanks to his personal experience, as well as thanks to new achievements of neurophysiology, the Bobats have somewhat changed their approach and dismissed emphasis on other aspects of treatment. In its latest publication in 1984, they described how the main theoretical foundations of their concept changed.

At first they defended the need to put a child in special «Positioning Pathological Reflexes». Although the child's stay in these provisions and led to a decommion reduction, but Bobaths subsequently came to the conclusion that this decrease in the tone is temporary and is not preserved when they are fulfilled by the child of other movements.

In the future, they emphasized the importance of influence on «Key control points». At the same time, the influence of the physiotherapist was conducted during the motor activity of the child and was directed to suppressing pathological engine models and stimulating the development of more correct movements.

In its latest publication, the authors concluded that they paid too much attention to the development of automatic reactions of straightening, adhering to the wrong assumption that the child would be able to spontaneously transfer this experience (skill) to consciously controlled movements. After that, they began to develop more in a child with the opportunity to lead their movements and especially equilibrium. They also concluded that it was erroneous to promote the engineering development of the child, having rigidly observing the normal sequence of motor development.