What is Rakhit? What symptoms should alert parents? How to treat Rakhit?


BUT that's it
far from the most unpleasant consequences of Rahita. It happens that the situation
It makes much worse. True, in such cases, we are usually,
It is not about rickets as such, but about hereditary rickets
Diseases. It is about them that conversation with the head of the department
Congenital and hereditary diseases of Pediatrics and Surgery by Dr. Medical Sciences The main geneticist of the Ministry of Health of Russia Petro Vasilyevich Novikov.


Question number 1. What is Rakhit? 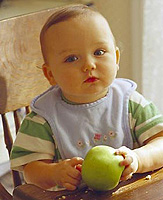 In the last decade, Rakhit's problem was engaged not only
Pediatrics, but also genetics, as scientists have become increasingly noticing:
Ordinary prophylaxis according to the scheme developed in Soviet times,
obviously not enough. It's hard to say what's the matter. Perhaps the case is,
that today many pending pediatricians are not responsible for
Children's health, do not always control the execution of prescriptions. Maybe
Being a role was played by the fear of the body's hypervitaminization - after all
Scientists have repeatedly warned about the danger of this phenomenon. But fact
remains a fact: in recent years, the number suffering from ordinary
Rickets, but in a wicked form increased.

As a rule, it is
happens if parents neglected its prevention or vitamin D
did not assimilate the child's body. The latter is especially often if
Kid is susceptible to allergic reactions. But there are a number of and so
called hereditary rickets-like diseases. Their external
manifestations are very similar to classic rickets, because both in
another case the body suffers from the lack of minerals, but
essence is absolutely different diseases. With the usual rickets of calcium salts and
phosphorus do not digest in the intestine due to the lack of vitamin D. At
hereditary is about the defeat of the renal tubules: the kidneys are not in
condition to delay the same calcium and phosphorus salts - they come out with
urine.


Question # 2. What should alert parents?

I must say that in some cases the emergence of this disease
The child can predict. The risk group includes children from families,
where in the family were or there are patients with ricket-like changes of the skeleton,
which remained for a long time - from five years and more. Second, on
What should be paid attention to, these are low-spirited people in the family. How
The rule, hereditary rickets is accompanied by a delay in growth. AND
Of course, if someone from the family members operated «about» Rachita.
Hereditarywriter Rahit is never transmitted from his father to his son - only to her daughter, the risk is 50%. From mother hereditary
Rahit moves to boys, to girls with the same probability percentage.
But pairs are «at-risk groups» We prefer to examine in genetic
consultations before conception to correct them correctly
The rest of the child. And those parents who have not concerned
in charge of this issue, should pay attention to the following
Symptoms: Loge in weight gain, excessive fluid consumption and
Emptying, often repeated vomiting without visible reasons.
Unmotivated cramps - muscles strain and stretch, baby
Burly reacts to electric light. In addition, one of the symptoms
hereditary ricket-like illness becomes constantly
Increased temperature - 37.2 - 37.3. There are horse races - up to 38.0 - 39.0
and sharp decals. Of course, the diagnosis based on speculative conclusions is not
put, for this it is necessary to pass a number of analyzes, consult
genetics.

Question number 3. And how is the treatment of Rahita?

Treatment depends on the severity. After all, in hereditary
Rachi-like diseases are lungs and heavy forms. Besides,
hereditary rickets are very cunning - can first manifest itself in five,
And at ten years. Although in 90% of cases it is still detected in
First-second year of life. And if you diagnose it at this time and
start the right treatment, most likely will cost without surgery. And what
concerns directly treatment, then active forms are appointed
Vitamin D, other vitamins and trace elements - with their help
Corrigue osteoporosis, renal defects, metabolism. Besides,
For such patients, special diets have been developed. But all appointments
Doctor must rely on the results of the tests. Unfortunately, to us more often
appeal when one therapeutic measures do not help, and without surgery
No longer cost. True, and it should be done only after medication
preparation - and it can last year, and two. The operation goes to
Two stages: first on one leg, and eight months old. But,
It seems that all parents understand that it is better not to bring. Top
more illness is quite possible to prevent. It is necessary only in time
pay attention to certain symptoms.