Practicing gynecologists and mammologists constantlyface cases of fibrocystic mastopathy. According to various sources, the frequency of its occurrence ranges from 35 to 60% among all examined. The question of the methods of treatment of this disease directly relates to such aspects as the reproductive function of women (in the group of patients under 40) and compatibility with other drugs (in the group over 40). In both cases, treatment should be as gentle as possible. In recent years, the non-hormonal herbal drug Mastodinon® (Bionorika Germany) has become the “gold standard” for the treatment of benign breast diseases and PMS

Mastodinon® dyshormonal effective both in pathologies of mammary glands and in the menstrual cycle. Mastodinon has pathogenetic,dopaminergic mechanism of action (effect on D2 receptors laktotrofov pituitary gland), which reduces the secretion of anterior pituitary prolactin. At the same time normal production of gonadotropic pituitary hormones, which leads to the elimination of the corpus luteum insufficiency and related menstrual irregularities and infertility. By reducing the content of prolactin by the action of the preparation is the regression of pathological processes in the mammary gland at fibrocystic breast and stopped by cyclic pain (mastalgia, mammalgia). Violations of prolactin secretion processes can manifest itself in the form of latent hyperprolactinemia, which plays an important role in the development of premenstrual syndrome. Against the background of the drug, due to its components are leveled such manifestations of PMS, such as headaches, mental lability, irritability, depression.

Mastodinon important advantage is that it does notIt causes a decrease in prolactin levels below the normal range, which distinguishes it from synthetic analogues. The high degree of safety is already incorporated in the definition mastodinon® as a herbal remedy.

Herbal medicines havebetter tolerated, lower incidence of adverse reactions, the possibility of long-term use - and as self-therapy or in combination with other drugs - as well as virtually no contraindications. 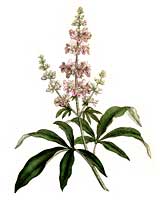 The main active substance mastodinon® - An extract of the fruit of the tree of Abraham - a long timeIt is known in medicine. Another ancient Greek physicians used this plant for the treatment of gynecological diseases. Evidence of this can be found, for example, in the works of Hippocrates (IV century BC. E.). Currently, the company "Bionorica" ​​(Germany) in its activities in the production of extracts- Realizes the original concept phytoneering (from «phyto» - a plant and «engineering / pioneering» - applied science, engineering / be the first). This strategy involves the organization of scientific research, agricultural technology, advanced manufacturing, multi-stage quality control and environmental safety measures to a single concept, allowing you to create highly effective products of high and stable quality of the plants. In the manufacture of the drug mastodinon uses the latest technology of production of drugs that preserve the medicinal plant material. The preparation includes the original, patented extract based Abram tree - BNO 1095, which has a proven mechanism of action and has an extensive scientific evidence base. The mechanism of action chaste tree fruitIt is to reduce prolactin, which in turn leads to the regression of pathological processes in the mammary glands and the relief of pain cyclic. Rhythmic production of gonadotropins in the normal level of prolactin production streamline the second phase of the menstrual cycle. As a result, it eliminated the imbalance between progesterone and estradiol. Funds on the basis of Abraham's tree are effective in the treatment of fibrocystic breast, PMS, and for the correction of menstrual disorders associated with hyperprolactinemia and LPI. However Mastodinon® It is a combined drug, it alsoincludes: cohosh vasilistnikovidny, alpine violet, grudoshnik bitter, colorful iris, Tiger Lily. These substances potentiate the action of extract of chaste tree. Thus, the overall result is a combined drug effects:

These processes lead to the swelling of breast removalglands, mastalgia reduction and regression of degenerative changes in breast tissue. In addition, the use of vegetable Mastodinon homeopathic drug® It promotes the establishment of a regularmenstrual cycle, making it the first drug of choice - like syndromes mastitis and PMS, which are known in practice are often combined. Appointment of a drug is undoubtedly the most acceptable to the patient from the point of view of safety, and economic position. But at the same time as effective therapy mastodinon® ?

In the last 10 years in our country and abroad, several clinical studies have been conducted, which clearly showed the possibility mastodinon®.

In a multicenter, randomized, double-blind, placebo-controlled, double-dummy study, conducted by Professor Wuttke W. - with the participation of 120 women was studied the effectiveness of mastodinon® in solution and tablets for the relief mastodynia. Patients in the study had severe somatic diseases have been excluded breast diseases, pregnancy and lactation, as well as oral contraceptives and other hormonal drugs. Patients were pain diaries day before menstruation, including assessment of pain intensity on a visual analogue scale (0 mm as absence of pain to 100 mm as the unbearable pain). In parallel, assessed the presence of PMS symptoms (swelling, abdominal pain, headaches, mood disorders). After 3 cycles of treatment reducing the intensity of pain was 36.5 mm in the background Mastodinon solution and 36.7 mm on the background of a tablet formulation, significantly different from the dynamics of indicators in the placebo group - 20.8 mm reduction (p = 0.0067, p = 0.0076). The effectiveness of treatment was apparent after the 1st cycle: reduction of pain according to VAS of 22.5 mm in patients receiving Mastodinon solution and 10.5 mm in the placebo group (p = 0.00472). In addition, PMS symptoms much less frequently recorded in the main group compared to placebo. Tolerability of treatment was good, observed mainly mild adverse reactions nonspecific severity and their frequency was comparable to that in the placebo group.

Another placebo-controlled,randomized, double-blind study of the efficacy mastodinon (drop) in the treatment of cyclic mastalgia, was held M.Halaska et al. Initially, the duration of premenstrual tension of the mammary glands was 5 days or more; mastalgia intensity was assessed using a visual analog scale, and was 63.5 mm in the main group and 58.0 mm in the control group. After 1-2 cycles mean decrease in pain intensity was 21.4 / 33.7 mm in patients receiving VACS (n = 48) compared to 10.6 / 20.3 mm in the placebo group (n = 49), the differences were statistically significant (p = 0,018; p = 0, 006). After 2 treatment cycles 71.2% of women in the basic group according to pain intensity VAS not exceed 35 mm. After 3 treatment cycles in average pain intensity VAS reduced by 54% (34.3 mm) in the main group and 40% (25.7 mm) in the placebo group (p = 0,064). Moreover, women with baseline severe mastalgia significantly decreased the number of days during which they marked pain. Already after 2 cycles of therapy 50% of patients did not report the presence of days with severe pain. Subsequently, this favorable trend continued. The study observed good tolerability mastodinon. Adverse effects were uncommon, their incidence in the two groups did not differ, and they were only mild severity.

A recent 2008, Was a study in FSI Russian Scientific Center of Radiology. It was attended by 650 women with various forms of mastitis. After a 3-month course of treatment mastodinon® data integrated survey were as follows:

This was manifested decreasing intensitymastalgia and density of tissue and edema on mammograms. Control over six months showed that the effect of treatment is maintained in all patients. This is not surprising: Mastodinon® - A popular drug, it is indicated for activeSymptoms of mastitis and PMS. These questionnaires antenatal doctors once again confirmed by the results of clinical trials and suggest action expressed mastodinon® and its excellent tolerability patients.

By the way! It has been observed that Mastodinon® also relieves pain in the mammary glands on the background of hormonal contraception or performing