With the known variability of mastitis, species andsubspecies which now number more than 50, distinguish two main forms, correlated with the stages of development of disease - diffuse and nodular. When we speak of a relatively quick and effective cure, usually it refers to the lightest - diffuse form. In this case, the doctor has the opportunity to apply gentle therapy, including special diets and herbal preparations. For many years, the gold standard for non-hormonal treatment of mastitis recognized phytopreparation Mastodinon® production company "Bionorica".


Diffuse form of mastitis is the mostcommon. Its main symptoms - and mastalgia engorgement that occur in the second half of the menstrual cycle and usually disappear with the onset of menses.
Unfortunately, women are of the opinion thatthis state is within the rules, and they ignore the symptoms, although it is in the initial stage of breast disease responds well to treatment. With further development of the diffuse form of the disease can be transformed into an anchor. Chest pain thus becoming more intense and longer run from the beginning of menstruation. Possible allocation of colostrum, bloody or clear fluid from the nipple. When the feeling chest easily defined irregularities, sometimes nodes are detected even visually. Prolonged untreated nodular breast disease may go into a state of poor quality, and in the later stages of therapy is mainly aimed at the prevention of cancer, often surgical treatment.

It is no accident in modern Breastand gynecological practice, great importance is given to the early diagnosis of breast diseases. In particular, Russian doctors a single universal Women Survey algorithm was developed for the detection of pathological conditions in the early stages.

According to the principles of this technique, all women,Refer to the gynecologist, irrespective of diagnosis, or lack thereof, must necessarily go through breast examination. And vice versa - women with benign breast diseases require a gynecological examination, which should not be limited to visual examination and ultrasound.

According to the developers of this technique, prof. VE Radzinsky, Head. cafes. Obstetrics and Gynecology, People's Friendship University, "... the algorithm will help to diagnose the adjacent pathology, it is necessary to select a treatment regimen. an integrated approach to improve the efficiency of the treatment therapy of gynecological diseases and diseases of the mammary glands, in turn, will reduce the number of relapses, and breast cancer. " 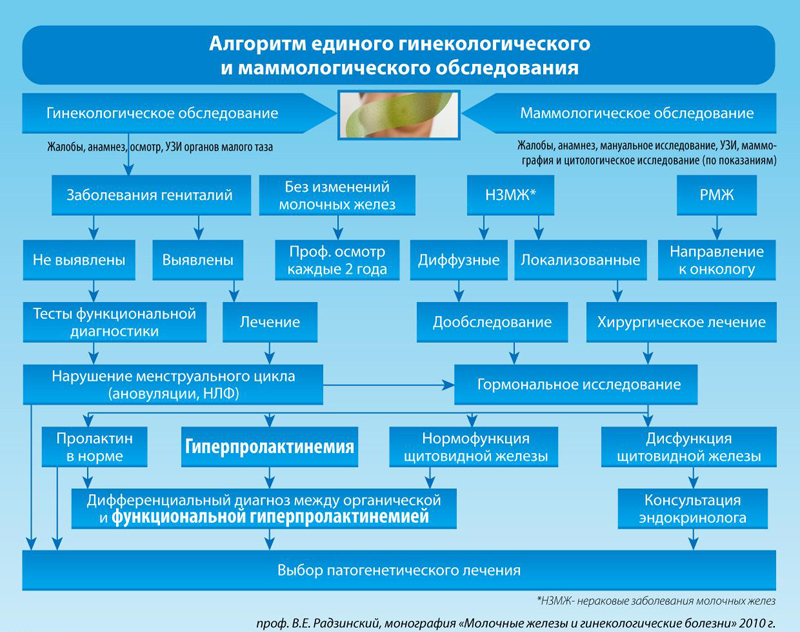 One such complex means showing a high efficiency in combination with a reliable safety profile, a non-hormonal plant drug Mastodinon®. Under its action, the reverse development of pathological processes in the mammary glands occurs, the cyclic pain syndrome is stopped, and the PMS is leveled. Mastodinon® It is a natural remedy, and its possibilities are based on the classic, well-studied herbal medicine in the healing properties of plants. The main active substance mastodinon® is a sacred Vitex extract (Abrahamtree). The fruits of this plant have been used in traditional medicine since ancient times. Vitex gently reduces the secretion of prolactin (without the risk of its deficiency), which leads to a regression of pathological processes in the mammary glands, as well as to relief of mastalgia and mastodynia. Under the influence of its active substances, the imbalance between estradiol and progesterone in the female body is eliminated. In addition, the composition of Mastodinon® includes: cornflower stem, Alpine violet, bitter chestnut, multicolored killer whale, tiger lily.

Importantly, despite vegetable origin Mastodinon® is not a dietary supplement, but a drug withextensive evidence base. Over the years of its application, a number of clinical studies have been carried out, both in Russia and abroad. In particular, a randomized, double-blind, placebo-controlled study conducted by Professor Wuttke W and Halaska M in 1997-1999 deserves special attention. In the course of this work, the property of Mastodinon was documented.® mastalgia and reduce mastodynia - more than 70% of participants noted a decrease in pain and a 35 mm on the VAS.

Also, patients who received Mastodinon®demonstrated a decrease in basal secretionprolactin at 4.35 ng / ml (against the background of -0.57 ng / ml who took a placebo). At the same time, excellent tolerability of the drug was confirmed - there were practically no undesirable side effects.

All these data are fully consistent with the experience of practitioners and gynecologists mammologists, who for more than 10 years confidently prescribe their patients Mastodinon®. In the case of early detection of mastitis is the best way to preserve women's health and wellness.