Diagnosis and treatment of thrombocytopenia

Many give the inspection results, allowingidentify the pathology of internal organs and diagnose the main diseases of the body. Determination of the size and consistency of the liver, lymph nodes, palmar erythema palms, spider veins, enlarged spleen may help in the diagnosis of disease. Identification of disease of the joints, skin, skeletal abnormalities, neurological status analysis is also very important. Not superfluous and is a regular thermometer to exclude bacterial or neoplastic disease. However, be aware that a small increase in the spleen, accessible to palpation, may be a variant of the norm - the spleen is palpated in 10% of healthy children and 3% of healthy adults. Necessarily radiography along with heart and lung and renal ultrasonography, especially the liver. We have seen cases of thrombocytopenia with hepatic hemangioma and local consumption coagulopathy.

The key to recognizing the causes of thrombocytopeniastill remain laboratory data. Meaning cytopenia, leukocytosis and abnormal leukocyte does not require special discussion. Compulsory study of urinary sediment and blood creatinine also debated. The need for sternal puncture is contested by some authors. We believe that it is necessary already in the early stages of the diagnostic search, as some variants of leukemia, pernicious anemia, thrombocytopenia debuting, as well as inherited forms amegakariotsitoza can only be detected in the analysis of sternal puncture. The study of platelet morphology necessarily (giant platelets, and others.). Sometimes confirmation bone marrow hypoplasia requires biopsy.

Determination of specific antibodies toplatelet antigens, as well as the duration of life platelets, serum complement, direct antiglobulin test and determination of IgG, associated with platelets, to confirm the diagnosis of idiopathic thrombocytopenia impractical.

Thus, the presence of thrombocytopenia obliges the doctor to conclude that her character, define its independence, and try to uncover the pathogenesis.

The presence of thrombocytopenia in a patient oftendoctor makes the first contact - outpatient, family or by general - to take emergency measures, not only in terms of inspection, but also the purpose of drug therapy and the almost certain hospitalized patients. At the same time, a long observation of patients with thrombocytopenia, especially with ITP, shows that emergency therapy is indicated only in patients with severe bleeding, life-threatening. In patients without hemorrhagic manifestations with platelet count 30 x 109 / L does not require any hospitalization or treatment. Hospitalization is indicated for people with life-threatening bleeding, regardless of the level of thrombocytopenia, as well as in patients with mucosal bleeding at platelet counts below 20 x 109 / L and those who live far from medical emergencies or place characterized by inappropriate behavior.

A patient with a normal mentality and livingwhere medical assistance can be provided without delay, hospitalization may not be necessary even in the presence of small hemorrhages at the level of platelet count of more than 20 x 109 / L. Serious hemorrhagic manifestations, even when platelet levels in the range of 10 x 109 / l are only 5% of cases, and at a level above 50 x 109 / l, even trauma is rarely complicated by severe bleeding. platelet count below 10 x 109 / l is complicated by severe bleeding in 40% of patients. These considerations and define the modern medical management of patients with thrombocytopenia.

The proposed tactics can be briefly summarized as follows.

When the patient treatment is indicated, the medicalScience involves the following treatments: glucocorticoid therapy, intravenous immunoglobulin, the combined use of corticosteroids and immunoglobulin, splenectomy, the introduction of D-Rh serum, platelet transfusion mass.

Glucocorticoid therapy. Most patients respond to treatmentglucocorticoids rapid rise in platelet count. A dose of 1.5 mg / kg should not be more effective than a dose of 0.5 mg / kg. Effective doses always possible to determine only empirically. The initial therapeutic dose in adults of 40-80 mg of prednisone per day (15 mg every 6 hours). Other glucocorticoids have any advantage compared to prednisolone. For intravenous hydrocortisone be preferred in a daily dose of 200 to 300 mg. This treatment should be carried out for 3-4 weeks. or until remission. The latter can be considered complete if simultaneously with the cessation of bleeding observed rise in the number of platelets, or partial, when at a stop bleeding thrombocytopenia level does not change significantly. After remission daily dose of prednisone can be reduced quickly - 5 mg per day to 30-40 mg. Thereafter, the dose is gradually reduced - at 2.5-5 mg per week. This type of treatment is almost always accompanied by undesirable phenomena: kushingoidizm, hypertension, diabetes, steroid ulcers in the stomach, weight gain, cataract formation, osteoporosis, a change of mentality. This can be observed after 20 weeks of treatment, even in a dose prednisone 10mg / day. Unfortunately, after the discontinuation of treatment to achieve the desired level of platelets retained less than 50% of patients. In practice this effect of therapy have only 3 to 50% of the treated patients. 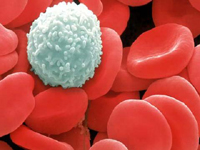 Intravenous immunoglobulin may increase platelet levels in almost 75% of cases, even with severe chronic thrombocytopenia.

In 50% of patients indicated level riseplatelets to near normal. Unfortunately, the effect of treatment is also short-lived. Over the next 3-4 weeks. platelet level drops almost to the original 75% treated. Up to 30% of patients treated with intravenous immunoglobulin later became resistant to it. It describes the various modes of administration. Some authors suggest administered it daily for 5 days in a dose of 0.4 g / kg. Other introduced almost similar dose - 1 g / kg for 2 days. A single injection of immunoglobulin at a dose of 0.8 mg / kg gives the same results as previously reported regimen.

Comparing the effectiveness of treatment with immunoglobulin and corticosteroids, you may notice that their effect is almost the same.

Treatment with antibodies to the Rh factor, therapy of anti-Rh-D-serum. The experience to date of application experienceanti-Rh-D globulin suggests that it leads to a transient recovery of platelet levels in almost 50% of treatment, the effect is kept within 2-3 weeks. This therapy is less effective street, underwent splenectomy.

Splenectomy in the treatment of thrombocytopenia is shown in the following cases:

In all other cases, thrombocytopenia, splenectomy is not recommended.

Other treatments. Cases of effective treatment of thrombocytopenia, azathioprine, cyclophosphamide, vincristine, vinblastine, colchicine, and interferon, cyclosporin, aminocaproic acid, plasmapheresis, irradiation of the spleen, and others. However, to date the effectiveness of any of these treatments does not yet have a serious confirmation in multicenter placebo studies.