Home>Diseases of the ear, nose and throat (ENT)>Just a sore throat, or exacerbation of chronic tonsillitis

Just a sore throat, or exacerbation of chronic tonsillitis

"Chronic tonsillitis? Have-nots "- such an attitude to the disease on the one hand demonstrates its wide dissemination, on the other - a careless attitude towards their health. About chronic tonsillitis how the dangerous disease will be discussed in this article.

Chronic tonsillitis, sore throat, or simply,called long-term inflammation of the tonsils current flowing with periods of calm, and characterized by the development and exacerbation of infectious and toxic and infectious and allergic reactions.

Chronic tonsillitis - is extremelywidespread disease, almost everyone can find at one or another of its features, especially in the winter. Most people know: not to be ill with angina, need to be tempered, and do not drink cold drinks, relieve sore throat will help tea with raspberries and sugar candies with antiseptic. To the doctor, we appeal in exceptional cases, when the disease interferes with school or work and needed sick leave or when tonsillitis develops atypical and need medical attention.

Why is he there?

Chronic tonsillitis is the outcome of acuteinflammation of the tonsils caused by various bacteria, viruses, and even fungi. In 30% of cases in the tonsils of children found in patients beta-hemolytic streptococcus group A, causing a global restructuring of the immune system, provoking the development of autoimmune diseases such as rheumatic fever and glomerulonephritis. In adults streptococcus detected in only 10% of the more common streptococci other groups and other microorganisms.

If preceded by acute tonsillitisangina, can clearly indicate the day of the disease, but in most cases, angina is masked by other, more painful symptoms of SARS, adenoiditis or periodontal disease, then the disease develops unnoticed, and only detects changes in the tonsils physician during the examination.

For what it is you need to know? First of all, in time to take preventive measures and to choose the right treatment that will avoid complications of rheumatic fever, endocarditis and glomerulonephritis.

Exacerbation of chronic tonsillitis contributehypothermia, activation of a chronic infection, reduction of immunity, including as a result of diseases of various organs distant from the throats. The appearance of mild pain in the throat when swallowing evidence of the approaching danger, but timely use of antiseptics, irrigation nasal, throat rinse process can be stopped. In the worst case, inevitably full worsening of tonsillitis.

Exacerbation of chronic tonsillitis may occur in two forms: in the first case, it resembles acute tonsillitis in the second developing peritonsillar abscess.

Peritonsillar abscess, or a collection of pus intissue surrounding the tonsils, at first looks like an ordinary sore throat, but after a few days, when it should come to relief the pain in the throat, on the contrary, increase, increases swelling of the throat, difficult swallowing up to full impossibility of receiving even liquid food. Because of the severe pain does not open his mouth in the submandibular region probed sharply painful swollen lymph nodes.

Peritonsillar abscess - a dangerous disease that can be complicated by the breakthrough of pus in the surrounding area, the development of blood poisoning and infectious-toxic shock. 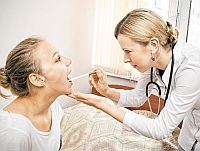 Simple chronic tonsillitis - the initial stagedisease. For him typical of less frequent exacerbations as the presence of local signs of chronic inflammation of the tonsils: enlarged, pus-filled follicles, congestion in the gaps, redness palatine arches and the formation of adhesions between them and the tonsils.

Toxic-allergic form of chronictonsillitis first type is developed with the involvement in the pathological process of the immune system. It is characterized by recurrent exacerbations that occur after each of SARS, manifested general intoxication, weakness, malaise, fever, pain in the joints and the heart, and leaves behind a "tail" in the form of various functional disorders.

When toxic-allergic form of the second typeworsening symptoms are even brighter, heart pain are reflected on the ECG in the form of functional disorders and changes in rhythm, and these violations persist in the quiet period of the disease. Even during remission observed low-grade fever, revealed violations of the liver, kidneys, joints and other organs. It may develop rheumatic fever, endocarditis, combined with heart diseases, infectious arthritis, glomerulonephritis, prostatitis, thyroiditis, and meningitis.

Thus, chronic tonsillitis - notharmless disease, the symptoms of which can be ignored. It is an infectious-allergic attack on the entire body, requires active counter-offensive.

How to treat chronic tonsillitis?

The basis of the treatment of antibiotictherapy, cure tonsillitis is impossible without it. Antibiotics are used for treatment of general and local, in the form of sprays, along with gargling antiseptic, tincture and decoction of herbs and candy resorption.

In acute tonsillitis requires bed restmode, it can reduce the burden on the body and the cardiovascular system. Power implies sparing diet, which excludes the use of overly hot and cold dishes, rough, spicy, sour, sweet and salty foods, sausages and pickles. To reduce the pain in the throat and the active removal of toxins from the body shows plenty of warm drinks.

In order to combat fever usedantipyretic drugs from the group of non-steroidal anti-inflammatory drugs. To reduce the allergy of the body and reduce the likelihood of developing autoallergens use antihistamines to enhance immune defense - immunostimulants, antioxidants.

Education is a peritonsillar abscessan indication for surgical treatment, that is, opening the abscess and draining its cavity to ensure outflow of pus. After surgery, treatment is performed just as in the case of a simple exacerbation.