disease
by admin
Well ... again cold. Strange, is not held, and headaches, some have begun ... And the person is sent to the reception to the otolaryngologist. The doctor, after spending the necessary manipulations, makes the diagnosis - you have sinusitis. Let's see what kind of disease, and as a common cold can turn into sinusitis. 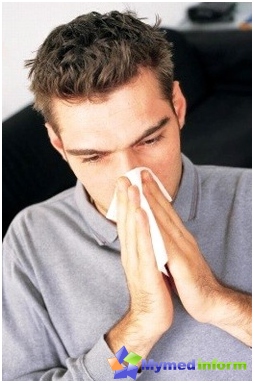 Well ... again cold. And just a week poshmygat nose and everything goes by itself. Strange, is not held, and headache some have begun ... And the man goes to the reception to the otolaryngologist. The doctor, after spending the necessary manipulations, makes the diagnosis - you have sinusitis.

Let's see what kind of disease, and as a common cold can be transformed into sinusitis.

During a cold settles in the nasal passagesinfection, pathogenic bacteria cause swelling of the nasal mucosa, nose "lays". It appears mucus, first clear ( "nozzle flow"), and then a thick, green. There should be more cautious. The emergence of green slime - a sign of severe inflammation. At a cold, we often blow your nose, struggling to clean your nose. And often we forget that the nasal passages are closely related to the maxillary sinus, located on both sides of the nose, under the eyes. From intensive blowing your nose mucus gets into his bosom and begins inflammation - sinusitis.

The doctor determines sinusitis after inspection: inserts a nose extender and visually inspects each nostril. 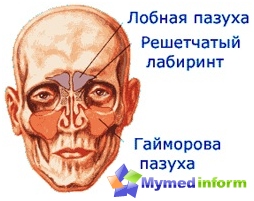 But an accurate diagnosis can be established only on the basis of X-ray data. The patient made an X-ray, and if you have sinusitis, the area between the eyes and the upper jaw will be opaque white.

You can define yourself and sinusitis, Arise, and slowly bend forward. If you feel a nagging sinus pain in maxillary sinuses and forehead.

Sometimes it happens that the roots of the upper teeth are very close to the sinus and then the patient feels the pain of sinusitis permanently throughout the upper jaw. 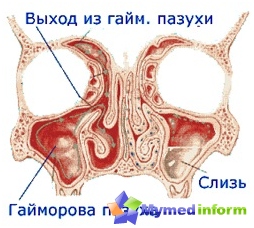 Acute sinusitis declares itself a permanent headache, thick mucous nasal discharge, feeling of pressure and fullness from inside. The patient feels weak and broken.

If sinusitis is left untreated, it goes into thechronic form. The pain gradually disappears, but nasal congestion, recurrent headaches remain. Our site is not recommended to get involved in decongestants to get his nose breathing. But many often use such drugs, but if it is sinusitis, then in a way it does not cure, but can only be used for addictive drugs.

It is worth noting that in chronic sinus inthe nose is constantly present source of infection, so any hypothermia or alcohol abuse (alcohol - a powerful blow on immunity) leads to prolonged cold. When unfavorable course of chronic sinusitis develop nasal polyps that need to be removed surgically. But the most unpleasant consequence of chronic sinusitis is the loss of ability to perceive odors. 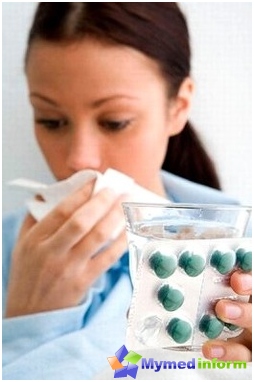 In acute sinusitis doctor prescribes the patientantibiotics. Now there are powerful drugs that can overcome the disease in just three days. It Zitrolid or Macropen. We need to take one capsule a day before meals, washed down with plenty of water.

There are older antibiotics used totreatment of sinusitis - ampicillin, amoxicillin, cephalexin. The choice of antibiotic depends on the preferences of the doctor and on the presence / absence of an allergy in the patient to one or another type of antibiotic. To facilitate breathing, the doctor will prescribe vasoconstrictors, but will also explain how often they can be used (galazolin, nazol, rivivin, and others). If there is a suspicion that an allergic reaction has become the cause of sinusitis, antiallergic drugs will be prescribed: Clarotadin, Tavegil, Tsetrin Suprastin, Zirtek, Claritin.

If sinusitis is not heavy, the patient will spendsinus evacuation soft catheter. The essence of the procedure are as follows: the patient lies on his back. The doctor inserts into one nostril of a soft catheter, and inserted into the other nostril suction. In order not to drown, the patient should always say "ku-ku-ku-ku" (hence the name - Cuckoo method), then the message is interrupted by the nose to the pharynx, and the solution does not get into the windpipe. As the catheter is fed furatsilina solution, the patient is "cuckoo" and suction pumps out a solution together with the contents of the sinus. The effect is achieved by creating a negative pressure in the sinus. After the procedure in the sinus is a certain amount of furatsilina solution that prevents the formation of pus.

The effectiveness of this method is not large, it may take several treatments, after which the patient suffers from severe pain in the maxillary sinus.

Puncture of the maxillary sinus

Besides antibiotics doctor may suggest that the patientspend a puncture of the maxillary sinus. It is a simple procedure that does not require special training. The doctor takes a thin spatula, at the end of which wool soaked with lidocaine, inserts the spatula deep into the nostril - need to anesthetize the place where the puncture will be done. Then, with a sterile needle (the needle is large, with a curved end) the doctor pierces the bony partition between the nose and the course of the maxillary sinus. It does not hurt, because the anesthetic effect. The needle can not be removed, the doctor attaches a syringe to the needle and saline flushes the contents of the sinus. For patient choked, the doctor asks him to sit with his mouth open, everything will flow out through the mouth into the outstretched the capacity. The process of filling saline sinus very unpleasant - a painful feeling of pressure inside. After sinus filled with saline, begins the contents of outflow from sick sinus. To re sinus cavity was filled with pus in the sinus injected dioksidina solution.

To help in the treatment of sinusitis may physiotherapy. 5-7 sessions SoLux UHF or significantly improve the condition of the patient.

If treatment is started on time, sinusitis easycured within a week. Chronic sinusitis may require much longer treatment and even surgery. The essence of the operation is to make a permanent opening between the maxillary sinus and the maxillary area. To do this, make the cut in the mouth, on the upper jaw and carefully scrape the pus sinus. When the hole is formed, the cut in his mouth sewn. After surgery, pus in the sinus will not be stagnate, emerging through a hole in his throat. The rehabilitation period after surgery - about two weeks. 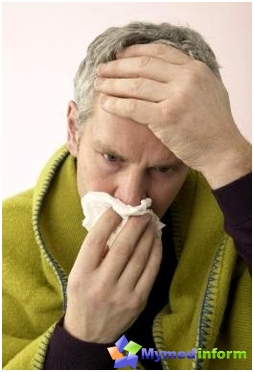 The nose - it is a "great" place whereInfection can easily get in the throat and into the lungs, and brain. Therefore, the most frequent complications of sinusitis are pneumonia, sore throat and meningitis. Do not treat sinusitis can not be: it does not heal on their own, just go into the chronic form.

To prevent sinusitis, it is necessary to carefully monitorthe state of his nose and mouth: time to treat carious teeth (tooth with a "hollow" - a wonderful environment for pathogenic bacteria), to prevent the development of inflammatory processes in the mouth - inflammation of the gums, foreign bodies between the teeth. The nose should be healthy - that's the entrance gate for any infections transmitted by airborne droplets. Therefore, our site encourages you in the cold season every day before going out to lubricate the nostrils with any antimicrobial agent - it can be oxolinic ointment, spray IRS-19 or something else. This simple procedure will protect you not only from rhinitis (and sinusitis), but also from the influenza virus.