Home>disease>How to treat a runny nose

How to treat a runny nose

disease
by admin
Runny nose, seemingly such a simple disease,and how much trouble it gives us ... a headache, do not want to do, and in the nose - a revolution. And such trouble could fall on us at any time of the year. Runny nose - a viral disease, an infection or not, depends on your immune system. 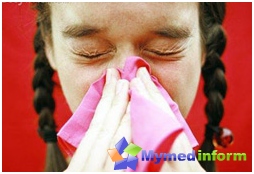 Runny nose, seemingly such a simple disease,and how much trouble it gives us ... a headache, do not want to do, and in the nose - a revolution. And such trouble could fall on us at any time of the year. Runny nose - a viral disease, an infection or not, depends on your immune system. A strong immune system can fight the infection and the common cold is not. And a person with weakened immune systems are not enough "margin of safety" and the long nose of 7 days will turn into a "fire hose".

What happens to the nose during a cold? 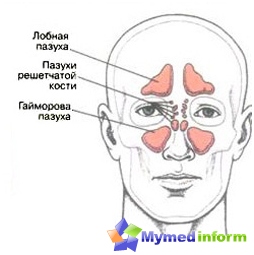 Runny nose - it is the local cold, in whichmucous membranes of the nose become inflamed, edema. Sharply increased mucus production, mucus covers the nasal passages, and we begin to breathe through the mouth. At the same time, it contributes to the increased amount of mucus cleanse the body of toxins. Therefore, a runny nose is also a positive side, blowing her nose, we clear the sinuses by mucus accumulating there.

And whether it is necessary to treat a runny nose? It seems to be no need to spend money on treatmentrunny nose - he will be held a week later. But this is not always the case. If the immune system is weakened, a cold can turn into a chronic form, and then from it will be almost impossible to get rid of. In addition, inflammation can spread at a cold on maxillary sinuses (Sinusitis), in the frontal sinuses or middle ear. And this is a much more serious disease.

When and how to treat a runny nose? 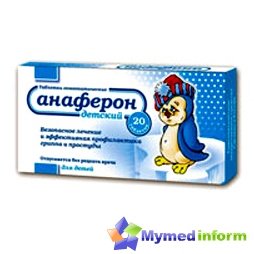 The easiest way cure rhinitisWhen it has only just begun. Yet not even mucus, but just a headache, forehead and nose, "cool." In this case, an adult already knows that such signs - signs of an impending cold.

What to do? We go to the drugstore and buy the antiviral drug. Most popular antiviral medications - Arbidol (more expensive) and Anaferon (cheaper). If you take Anaferon strictly according to instructions (1 tablet every half hour for 2 hours), rhinitis symptoms disappear almost completely on the same day. But you can not stop taking the drug, the virus is still alive and may well resurface. Antiviral agent must be taken within a week, and in the cold season such drugs can be drunk for a long time, from one month to three. Advantage Anaferon and similar drugs are not only that they suppress the growth of virus, but also stimulate the body's own defenses.

The development of the virus during a cold wellsuppress volatile contained in onions and garlic. It is not necessary to eat tons of onion, simply cut the onion in half and how to breathe on it. In the nose and throat burning sensation appears, it is quite a normal reaction. Of course, do not forget to screw up her eyes during the procedure. Children with a cold can make a "necklace" of garlic cloves. You can spread out around the room cut onion. And then your onion inhalation will last much longer. The same can be done as a prevention runny nose and other cold-related diseases. The only "But!" - To use a bow is not always possible, because of its peculiar smell is unpleasant to many.

Aerosols from the common cold: benefits and harms 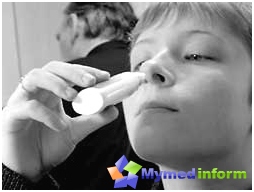 Drugs often in the form of aerosolsall vasoconstrictor activity. After applying the aerosol vessels are narrowed, the swelling subsides and the nose is cleaned of accumulated mucus. For several hours the person is able to breathe normally. It is tempting to use the drug again ...

But our site does not advise to get involved in aerosols fromcold, because it has a lot of negative consequences. If you long to enjoy such aerosols, may lose the sense of smell, sense of taste may change. Nasal mucosa can begin constantly dry, and that new challenges, a new treatment ... So spray - it's an emergency remedy for the common cold and it can be used only when absolutely unbearable feeling. But no more than once or twice a week.

Folk remedies for the common cold 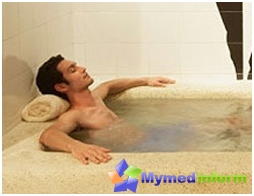 Instead, you can buy an aerosol droplets from the common cold tobased on natural oils. At a cold well help a drop containing a fir or eucalyptus oil. These oils have a bactericidal effect, decreases mucus production, easier breathing. As one option rhinitis treatment, it can be inhaled from pine oil. The easiest way - a bowl of boiling water, to which is added 3-5 drops of oil. We are covering with a towel and breathe in the steam.

During a cold, you also need to warm your nose, thisrelieves swelling well. To do this, you can take a small bag (if there is no bag, you can use a clean baby nose), calcine the large salt in a dry frying pan. We put a bag of salt on the nose and warm. If you don’t feel like messing with the bag, you can warm your nose with a boiled egg.

It is equally important during a cold to be inwarm and not supercool. I'm sure many people know that the appearance of a cold useful hover legs. Besides, you can take a warm bath with sea salt, to sleep in socks, in which fill dry mustard.

Among other folk remedies for the common cold -warming the breast with the help of a potato. Here's how: cook one large potato in uniform, cut lengthwise, put on chest several layers of newspaper, then a hot potato, and the top to wrap up something warm. As soon as the potatoes are gradually cools, remove the sheets of paper. Warming will be long, at least 20 minutes.

To support the immune forces of the body in the fight againstrunny nose just need vitamin C. As you know, it is very much in citrus fruits (lemons, oranges). Therefore, our website is strongly recommended to drink tea with lemon (and as much as possible), Vitaminki charge. Do not forget about the ascorbic acid in the form of drops, this is also a good friend since childhood version.

It is sad, but the cause of the common cold can become anot only hypothermia. Runny nose can be a manifestation of an allergy to any product, pollen or animal dander. Allergic rhinitis can last all year or occur periodically, during the flowering plants-allergen, for example. In such cases, to identify the allergen and prescribe treatment can only allergist.

To the disease has not taken the chronic formor even worse - did not give complications, treat runny it is necessary, in whatever form it does not show. And most importantly, do not get sick, trying to protect themselves from any causes of the common cold.