Home>disease>Dyskinesia: What You Need to Know

Dyskinesia: What You Need to Know

disease
by admin
When we talk about gall bladder diseases, themost often comes to mind, or gallstones, for example, cholecystitis. Often, however, the severity in his right side, pain after a heavy feast or, say, a sharp change of diet are caused by different reason - biliary dyskinesia.

According to statistics, women are faced with the dyskinesiamore often than men. Among women, this dysfunction occurs in almost 21% of the treatment to the gastroenterologist and in men - less than 8% of cases. Otherwise, the disruption of the bile ducts observed at any age - is found in both children and elderly patients, but often suffer from pain in the right side of people young and middle age. This is usually "guilty of" a high level of stress and the wrong diet. By the way, this age group is also very reluctant to see a doctor preferring to endure discomfort or ask at the pharmacy a preparation for the treatment of "abdominal pain". It is clear that the pharmacist - not diagnostic, and it is difficult to immediately determine the cause of pain and suggest the appropriate medication. Moreover, the problem is a complex one and the only drug therapy can not do.

Dyskinesia - what is it? 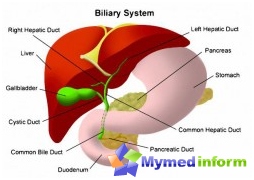 Immediately identify with what exactly is dyskinesia. This disorder biliary tract function, which interferes with their motility. The liver produces bile. Bile plays an important role in the process of digestion, because essential for normal motility and fat overwork. The day the body releases up to 2 liters of bile, but it need not non-stop, but only in those cases where we take food. That bile, which is not currently in demand for the digestion of food, accumulate in the gallbladder. With the reduction of the gallbladder bile flows into the duodenum.

For proper operation of biliary tract affectsdiet and quality of food intake, as well as the condition of the nervous system. Breaking the complex process of developing bile much, ranging from unbalanced diets, ending chronic stress. Diseases of the digestive system as the cause of dyskinesia are detected less frequently than independent form of this unpleasant disease.

Biliary dyskinesia is ahypertonic and hypotonic. Already from the name it is clear that the development of hypertensive dyskinesia of bile is very active - the gallbladder is reduced drastically and quickly, which is accompanied by spasm. Due to the spasm of the bile can not get out into the lumen of the gut in the required amount. Man thus feels stabbing and sharp pain in the right upper quadrant. Pain may be given under the shoulder blade, back, collarbone and so on. The attack of a bilious colic lasts 20-30 minutes or more.

Understand that in the liver pain is provoked by hyperactivity of the gallbladder is not difficult. These pains appear:

Pain is often accompanied by a feeling of nausea oreven vomiting. During the attack, many complain of tachycardia (rapid heartbeat), feeling of "fullness" in the right upper quadrant, feeling of heat ( "throws into the pot").

Important remark. If the pain does not subside, are "dagger" in nature, and you can not pinpoint where it hurts, call "ambulance" in order to exclude the possibility of an attack appendicitis.

Stagnation of bile, that is hypotonic dyskinesia,not accompanied by severe pain, discomfort although present in the liver and is very time-consuming. Sick in this form of psoriasis is less, but there are other problems - the chair disorders (constipation and diarrhea, which can replace each other), bitter belching, bloated stomach. digestive processes deteriorate When stagnation of bile.

What and how to treat dyskinesia 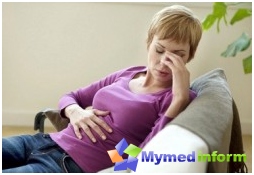 By itself does not cause dyskinesiapathological changes in the internal organs, but it is a pathological condition precedes the development of gallstone disease, relapse of existing diseases of the digestive organs.

When psoriasis should not drink painkillersdrugs! They affect the pain center in the brain, but the cause of discomfort is in the spasm. Consequently, the more benefits will bring antispasmodics - they are not cropped pain and relieve muscle tension. Musculature of the gall bladder relaxes and the pain goes away.

If you have problems with biliary ways, of course, should be examined by a gastroenterologist - a doctor will determine the form of dyskinesia and select therapy.

In hypertensive form (active bilebladder) than ever it is important to observe the correct diet. If you have pain you should try as much as possible to secure a quiet mode - do not be nervous, do not overwork, because emotional discomfort plays a big role in this case. It is necessary to take time off from fatty foods, broths (only vegetables, but without spices), alcohol and eggs. Contraindicated sodas. Allowed to have cereal, with a minimum of liquid food condiments, crackers (plain white or brown bread without salt and spices), vegetables. The thinner will be food in that period, the better. We can not allow long breaks between meals, it is impossible to overeat - eat often, but a little.

For pain relief can be taken"No-silos" or "Duspatalin". A good choice would be and herbal teas based on dandelion, shepherd's purse, wild rose. However, they can be used with one caveat. If the tone of the gall bladder is still elevated, the cholagogue grass can not be used, because the bile due to spasm can not freely exit into the duodenum. Bile fees while maintaining pain in the right upper quadrant should be taken very carefully and only in combination with antispasmodics.

With regard to bile stasis, the treatment regimenfollows. Since this form of psoriasis occurs mainly in people who lead a sedentary lifestyle, there is something to review in your daily routine and start to pay at least the minimum time physical activity. Showing Bile - can be safely included in the diet of a teaspoon of vegetable oil to three times a day (taken before meals), eating foods with bran. Very useful vegetables such as pumpkins and carrots. Raw beet salad, sauerkraut, carrots, pumpkins, dressed with a small amount of vegetable oil, will have a beneficial effect on intestinal peristalsis.

To eliminate stagnation of bile can be taken "Allohol", "Liobin" and so on.

Dear readers MirSovetov, remember thatbiliary dyskinesia, despite all the discomfort that it brings, can be easily adjusted diet and the stabilization of the emotional state.