disease
by admin
influenza problem and, in particular, it birdspecies has recently been widely exaggerated in the press, and according to some, just became a matter of speculation whether in the pharmaceutical, either on the poultry market - on the ground bringing profit, the second - ruining ... 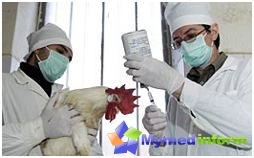 influenza problem and, in particular, it birdspecies has recently been widely exaggerated in the press, and according to some, just became a matter of speculation whether in the pharmaceutical, either on the poultry market - on the ground bringing profit, the second - ruining ...

In the discussion took part HeadDepartment of Infectious Diseases of the Crimean Medical University. SI St. George's Associate Professor PS Arshinov and Head of the Department of Microbiology, Virology and Immunology Professor JL, Krivorutchenko. We offer you their opinions.

New human influenza viruses capable ofcause a pandemic - is the result of mutations and recombinations. In the case of most mutants killed viruses, as they lose, rather than gain anything useful. However, some mutations just allow the influenza virus to linger in the human population, or in other hosts. But recombination - a rearrangement of genetic material that already existed before in the ancestral variants of the virus. Infecting the same host cell, genes from one grandparent strain mixed with other genes to form offspring with evidence of both the original viruses. It turns out the hybrid specimen: separate genetic blocks do not change, but that's an unusual combination of these blocks creates a new product.

It is considered the main recombinationtool origin of new strains. When changes occur quickly, the result is something unheard of before - including the most dangerous pandemic influenza virus variants. Recombination makes human population immunity, which is adapted to pre-existing strains, quite untenable. Biological "kitchen" on the creation of such a virus killer mainly located in Southeast Asia, but gradually occurring emissions and in other regions of the world - such as Russia, which has already been reported flu outbreaks in poultry.

It is well known that the poultry is sick with mucha higher level of legitimacy than the wild, which is considered a natural natural reservoir of influenza viruses. Typically, viruses are passed in the faeces. In the field of mass breeding virus can be detected in high concentrations in water. For the Crimea is extremely important. Ornithologists call our peninsula - "Avian station", "node station" in the migration of birds besides on Sivash and Swan Islands birds overwinter.

In the Crimea, as it does in the Black Sea, together with thebirds can be caught from Asia strains. By not very systematic reports, in the Black Sea countries recorded versions of the virus, similar to those found in Asia caused the mass death of animals and humans, with the hemagglutinin H5, H7 and H9.

The virus appeared in the countries that arenot far from Ukraine: in Romania; have been reported in Turkey, however, then from Turkey, followed by the objections. In any case, in Russia this virus appeared, and the animals are sick.

The problem is that in many countries stillthere is no generally accepted test systems, which would allow to register, whether it's those virus strains that have been discovered in Asia. Until now, the final comparative analysis is not done, much is not clear. And, perhaps, it will not be clear until then, until you begin the mass death of birds, with infection by these birds pigs and other mammals.

The peculiarity of pigs is that many of their immunereactions and other physiological characteristics are very similar to human ones - more similar than in other animals. Initially, the virus, including influenza, is easier to adapt to pigs than to humans. Pigs are an intermediate stage in which the virus, in its transformation, reaches a state where its variant can appear that can spread in the human population (that is, from person to person). This way of adaptation through pigs, according to American and English scientists who conducted a retrospective genetic analysis, went the virus that caused the famous "Spaniard." Thus, the story can be repeated ... The only difference is that the knowledge about this infection, about the nature of the virus and in general the approaches to the prevention of influenza have now changed significantly. People expect an epidemic, are more consciously preparing to confront it ...

And afraid to actually have something!

As acknowledged by the majority of scientists, the pandemicStill there. The only question is, when exactly: this year or the next, or in a few years .. And most importantly: what will be the mortality rate for people? Projections, it seems to me, a few hypertrophied: Americans, for example, believe that if there is a pandemic, the United States, hundreds of thousands of people will die. Such forecasts are based on the results of previous epidemics, and to some extent designed to alert the population and the authorities of states; This also laid the political and commercial risk.

Of course, when there are issues such asglobal epidemic in the case are the political interests of different countries and a lot of money associated with the production of vaccines and their procurement on a national scale, income of companies that produce system diagnostic and therapeutic drugs.

Ukraine, like any other State, notable to isolate itself, therefore, as a scientist-theorist, I can say that if the new flu sick all over the world, in Ukraine epidemic will happen too. If there is no specific vaccine is developed, then surely, most people get sick. Vaccines against avian influenza is not today, in return, some experts suggest the use of vaccines against influenza virus variants circulating in humans before. This is the logic; recombinant strains are a part of the genes of ancestors, including human (and similar) Thus, the anti-human virus hemagglutinin H1 vaccine partially protects theoretically, but from what? It is unlikely that infection by the fact - but the level of mortality and severe complications can be reduced.

With regard to meat. Meat chickens can be eaten, but it should be how to boil thoroughly or fry. The influenza virus is killed almost instantly at a temperature of 100 degrees and above, but preserved by freezing.

Can be useful the usual means of preventionand the treatment of influenza and its associated symptoms. But this tells Paul Spiridonovich yardstick - Head of the Department of Infectious Diseases of the Crimean Medical University. SI St. George's, associate professor.

Influenza is an acute infectious disease and its prevention requires special attention from us.

Mankind is constantly faced with the flumore than 1000 years. According to the academician VM Zhdanov, during this period mankind has experienced 500 outbreaks and at least 13 pandemics of influenza, caused mainly by influenza virus type A, which is not only able to change their antigens constantly, but to replace them. At the same time it has species-specific: as a rule, birds the virus can not hit a pig or a human, and vice versa. Due to the low stability of the environment the virus is transmitted by airborne droplets and transplatsentarno, providing teratogenic effects.

It is important to prevent influenza among thoseage groups that are most heavily exposed to it. Most often incidence observed in children under 5 years of age and persons over 65 years. The death rate from the flu varies from 0.01 to 0.2 per cent during the epidemic, it increases substantially during a pandemic. In the years 1918-1919 from the flu have died, according to various estimates, from 20 to 40-50 mln. People. Given that the Ukraine in 2003 soda sick 1,143,000 people, and in 2004 -. About 2 million people -. In 2005-2006, is expected next epidemic circulation of new virus type A - "California» H3N2, which can join influenza type "B" - "Shanghai".

In addition to the human influenza in the world thereother types of influenza A, are particularly often affect birds (H.7N7, H7N2, H5N1, and others.), and observed the disease in the individual contact infection with different clinical manifestations from December 2003, from lung - in the Netherlands to heavy - with loss of 62-67 people - in the region, where about 2.5 billion people (Southeast Asia).. People get sick when in direct contact with sick birds reliably. Transmission of avian influenza infection from man were noted to person. Thus, the bird flu is a serious veterinary rather than a medical problem.

There are two theories of variability of influenza. One focuses recombination of influenza virus, and another - based on the appearance of virus in the recycle human population. This question has not been studied.

The main method of preventing influenza isannual vaccination. Vaccines are developed, and their composition varies depending on the antigen composition of the alleged strain of influenza A that might be cause epidemic or pandemic.

Of all the vaccines, given even a small probabilityoccurrence of avian influenza in the structure of disease in humans, more suitable split vaccine (split vaccines) flyuoriks and Vaksigripp that, unlike subunit (inflation-vak), include not 2 antigen and 6 antigens (2 external and 4 internal) that allows the human immune system to create a faster and more intense immune system, which to some extent may have implications for the creation of cross-immunity to bird flu - in the event of possible appearance.

What can be offered treatment of influenza? - Amantadine and rimantadine, oseltamivir. It should be noted that to rimantadine sensitivity of influenza A has decreased in recent years, and it is banned for use in the treatment of children under the age of 14, as able, as it turned out, cause changes in the central nervous system. Arbidol will be on sale, which is used for treatment of influenza in a dose of 400 mg / day in 2 divided doses for 3-5 days, and for the prevention of - 200 mg / day at intervals of 3-4 days, the duration of the course - 3-4 weeks. Arbidol reduces the risk of the incidence of influenza and ORVZ in 2.6-3.2 times, shortens the duration of illness by 2-2.5 days and reduces the incidence of complications postgrippoznyh 2 times. There may be used other inducers of interferon, and - vitamin complexes, Drinking plenty of fluids, etc. (And still is - on doctor's advice). Antibiotics for the flu should be used very carefully, paying attention to age: children - only 6 months to adult patients - after 65 years.

To strengthen the immune system recommendedtempering procedures, observance of the usual hygiene standards required walking on air. Try to avoid stress, eat properly. Vitamins, including vitamin C, eat, but gently - a short course and in small doses (there is an opinion of experts that the excess of vitamins can be more harmful than their small flaw). With flu in any case do not drink alcohol in the "therapeutic" purposes: flu - not a cold and infectious viral disease. Try to limit the participation in events with large crowds of people - some of them can be infected and not know it (because the signs have not appeared), and thus be a carrier of the disease. Continuing the air conditioner is also not conducive to health - better ventilate the room more often. Limit travel in public transport - as far as possible, at least part of the way to work (study) and go to work on foot. At the first sign of the disease, stop contact with others, call your doctor, take bed rest.

Take care of your health!