disease
by admin
Of course, people want to live a long andhappy life. But those who are destined to the fate graciously long life, greatly increases the risk of becoming a victim of Parkinson's disease. It affects about one in a hundred elderly people. And no one is safe - even attained wealth, honors, power, fame.

Physicians stubbornly continue to seek effective ways that could help prevent the development of disease, delay it and improve the lives of patients. 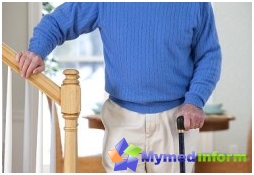 This slowly progressive, chronic ailmentDoctors refer to the group of neurodegenerative lesions of the brain. Degeneration in medicine is considered to be the death, withering of cells, tissues. Symptoms were first described in 1817 by a doctor from England, James Parkinson, then called the disease was trembling paralysis. After 50 years, the famous neurologist Charcot suggested calling the disease Parkinsonism. A disease occurs when, due to some reason (it’s probably not yet established) in the brain, the area called the “black substance” ceases to function normally. A person has a lack of dopamine, which is the neurotransmitter necessary for the proper functioning of the brain. Then, elderly people are disrupted coordination of movements, their coherence, there is stiffness when performing any movements, slowing down when walking. Often hands, chin, legs tremble, this phenomenon is called tremor. The disease makes itself felt when a person is from 50 to 60 years old, then it progresses steadily until the last days of the life of the sufferer. Sometimes it is accompanied by changes in the psyche and autonomic disorders. 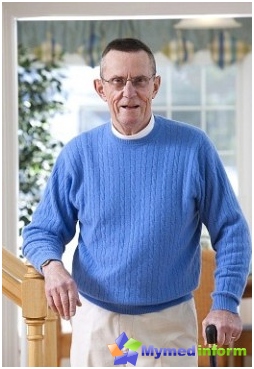 Our website lists the main symptoms and signs by which one can understand that a person has Parkinson's disease:

In the course of the disease are five series of successive stages:

Complication in this step may be pneumoniaWhich usually results in death of the patient. 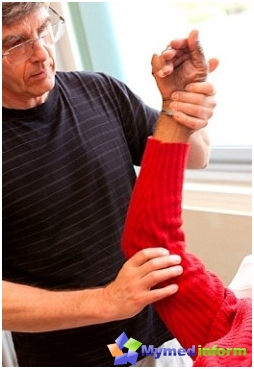 The objectives of the neurologist, to which refers the patient with symptoms of Parkinson's disease include diagnosis, the suspension of the withering away of the ganglion containing a dark substance dopamine, reducing the symptoms of the disease.

Relatives need to understand that a personsuffering from Parkinson's, it does not become dumber, but he due to progression of the disease is more difficult to express their thoughts, so difficult to communicate with him. Such people are in need of psychological support.

Medications are usually prescribed when movement disorders interfere with the patient to perform daily tasks. Main drugs for the treatment of Parkinson's disease are:

Over time, the drugs are addictive,therefore, the doctor is gradually forced to increase the dose. In order to avoid side effects, they adhere to the principle of treatment: they begin therapy with soft preparations that are effective in small doses, the dose must be added very gradually, drugs with a different mechanism of action can be successfully combined.

If the drugs do not help a patient, thensubcortical nodes do stereotactic surgery. The operation is performed on the other side, which is opposite to the one where symptoms predominate. More doctors are trying to be implanted into the striatum of fetal adrenal tissue, but to judge the effectiveness of this method is still too early.

Folk medicine recommends drinking early in the diseasedecoction of oats. Starts untreated zёrnyshek glass, placed in a large pot and pour 3 liters of water. everything is cooked for about an hour, stirring occasionally over low heat. Then everything is filtered. Drink the broth in small portions, replacing them water. This number is necessary to drink for two days. Then make a new batch. The course lasts 3 months.

If you do not hyperacid gastritis, constipation, in the summer time drink for one-third cup of cherry juice twice a day.

The benefit will an infusion of sage. To prepare it, put the evening in a thermos tablespoon of raw material, boil water and pour back in the amount of 250 ml. In the morning, strain the bitter medicine. This amount should drink four reception, after a meal. It is better to drink kiselёm.

Another popular method - treatment petalschrysanthemums, collected in his flower garden. They can nasushit fall. In the evening, pour liter of boiling water five tablespoons of flower petals. On the morning of the infusion is filtered, you drink it, too, after eating one glass four times per day. Every evening make a new infusion.

This is a fragrant blend recommend to do at the first sign of illness:

All combine in a thermos. Pour boiling water in a quantity of one liter. After 2 hours, filter and drink can be drunk as a tea. The day this portion is assumed to have a drink. Every day a new cook infusion. Duration of treatment - 45 days. Take a break of 15 days, and then re-rate. And so intermittently until the disappearance of symptoms.

Is it possible to prevent the disease?

After much research, scientists havethe conclusion that the systematic use of berries with a large number of anthocyanins (blueberries, raspberries, cherries, blackberries) can help reduce the risk of Parkinson's. Men can further protect themselves from Parkinson's disease, including in your daily diet of oranges, grapefruits, apples, and other foods that contain a lot of flavonoids. More flavonoids rich in medicinal plants, fruits (especially citrus), tea, chocolate, red grape wine.

If it so happens that you or someone fromrelatives diagnosed with "Parkinson's disease", do not despair and lose heart. Compliance with the doctor's recommendations will help to continue to operate for a long time, active lifestyle. Scientists continue to study the disease, looking for new methods and ways to help patients. We must believe and hope for positive results!