Home>disease>What is AIDS and HIV

What is AIDS and HIV

disease
by admin
The epidemic of unknown and terriblemodern diseases began more than twenty years ago. Acquired immunodeficiency syndrome called AIDS, which has been called "the plague of the 20th century," to this day it represents the greatest threat to humanity. Its rapid spread and the lack of possibilities of cure are enormous problem of modern medicine.

In spite of the constant research of scientists andhard work in the fight against a deadly virus at the moment there is no reasonable means for its treatment. our site encourages understand that HIV and AIDS are not at all synonymous with one of the disease. What is HIV - is an infectious disease that can lead to the stage of AIDS. 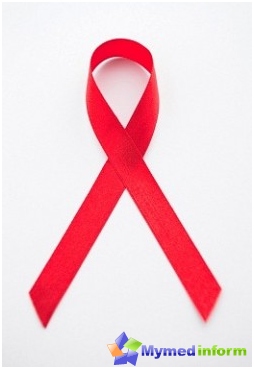 acquired immunodeficiency syndromeIt constitutes a violation of the normal operation of the human immune system caused by the action of HIV and consider it final, fourth stage. The symptoms of this disease and its clinical picture may have a variety of manifestations. The main characteristic that is determined by the presence of the virus in the human body - is a blood test «CD4 +», establishes the number of T-lymphocytes. This indicator measures the level of suppression of the defense system of the body immunodeficiency virus. It is believed that the number of CD4 cells in the blood of a healthy person can range from 600 to 1800 cells / ml blood. It should also be appreciated that different stages of life in the blood levels of these cells may be different, depending on the general health status at the time of analysis.

The number of CD4 substantially reduced by2-3 weeks after the virus enters the body of the patient. Depending on the level of resistance of the organism, this ratio is increased again, but never reaches its original value. The indicator, which is considered a reference point CD4, usually stabilized in a time ranging from 3 to 6 months. Thus, the degree of damage to the body determines the average number of T-lymphocytes, systematic drop which is approximately 50 cells / mm3 per year. Most of the human immune system is able to effectively control HIV as a result he can does not manifest itself for many years. 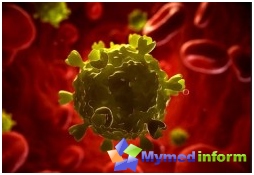 Deadly immunodeficiency virus capableexist in the body of an infected person for 10-12 years, it is showing no signs of damage immunity. Direct source of infection is a sick man. Infection is through contact with a liquid medium the patient. This may be blood, breast milk, vaginal secretions and semen. Consequently, the infection can be transmitted by blood transfusion, the use of a syringe with an infected person, through sexual contact (oral, vaginal or anal), as well as from a sick mother to child during breastfeeding or gestation. Modern epidemiologists have unanimously rejected the possibility of transmission of the virus through airborne droplets or by fecal-oral contact, because the allocation of the infection in the urine, faeces and sputum is quite immaterial. Also, the small number of susceptible cells in the respiratory tract and the gastrointestinal tract. Penetrating into the body of a healthy person, HIV infection primarily affects the dendritic cells, macrophages and T-lymphocytes. Affected virus elementary units of the body structure will inevitably die within a certain time. CD8 + cell destruction caused by the activity of T-lymphocytes because the CD4 + population of T-lymphocytes is constantly reduced, inevitably reducing cellular immunity. When the content reaches a critical level, the person becomes vulnerable to action of various opportunistic infections. Therefore it is necessary to clearly separate the concept matched each and AIDS, which is the last stage of mortal danger. 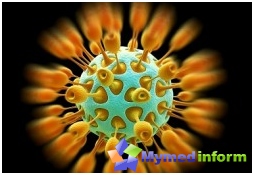 What is AIDS - is the last stepHIV disease progression, in which the analysis of the testimony «CD4 +» are below the level of 200 cells / ml of blood. During this period there is a maximum loss of protective functions of the human body, and therefore, reveals the prosperity of a number of opportunistic infections and tumor formation. AIDS determined reduction in resistance of the human body to such an extent that any disease as soon as possible reach the final stage of its development. At this stage, the patient may die in a few days from the common cold or alive to rot from the penetration of any infection. The most striking manifestation of the AIDS stage featured include symptoms such as sweating, sudden weight loss, fever, chills, and progressive growth of cancers. If in the early stages of HIV infection, the patient may not be aware of the years of its presence, it is at the final stage, he is well aware that the terminally ill. Such a person can easily recognize in the crowd on his mind terribly painful. However, to help him, unfortunately, it is already quite possible.

No matter how healthyLife is a person, it is always important to remember that every year infected with HIV is greater than the risk of infection and is becoming more threatening. It is necessary to maintain the utmost vigilance in matters related to sexual relations and the possibility of contact of blood cells with the patient's blood. But we should not be excessive anxiety in their daily lives. HIV can not be transmitted by sharing a meal, during the handshake, by insect bites, as well as swimming in a pond with a patient. Also, do not neglect to refer to those who are not lucky enough to avoid infection, and always remember that misfortune can happen to anyone, regardless of his social status, level of material well-being and lifestyle.