medicine
by admin
Parents often complain that as soon as their babywent into the garden, then immediately began a series of colds. And the cold sometimes become protracted and treated with difficulty. So how do you strengthen the immune system and reduces susceptibility to infectious diseases? Today we tell about the drops under the name "Derinat" that can be instilled into the nose, we shall understand their properties and methods of use. 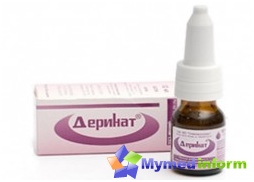 The active ingredient of this tool issodium salt of deoxyribonucleic acid. It is considered DNA carrier of the genetic code (or genetic information) of all the cells of a living organism. The reduction of acid names and formed the basis for the name of the drug. History Derinat began in the sixties of the twentieth century. Then, on the basis of the Institute of Biophysics of large-scale research work was carried out the Ministry of Health - studied radioprotective properties of the sodium salt of deoxyribonucleic acid. Then in our country different nuclear programs developed rapidly, which led to the emergence of patients exposed to radioactive rays. DNA was then prepared from marine animals. In the mid-eighties to our scientist-researcher JP Weinberg, a special unit was created that allowed milt of sturgeon native to extract the valuable substance. In 1994 Derinat drug became available in an industrial scale. Registration he passed in 1996. Then he was recommended as a radioprotective, immunomodulator and stimulator of hematopoiesis (normalization of blood the number of different types of white blood cells).

The most commonly used solution and drops itfor topical application. International name of the active substance - sodium deoxyribonucleat, auxiliary components - water for injections and sodium chloride. Drops are clear, colorless liquid, which should not contain any impurities. 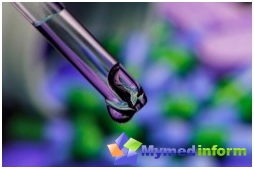 Drops Derinat prescribed not only for adults but alsochildren, starting from the first day of life. For prevention of SARS means instilled two drops in each nostril (or make one atomization) from two to four times a day for one to two weeks.

For the treatment of SARS, or ARI is necessary in the first daybury every 1-1.5 hours in each nostril 2-3 drops (or produce 1-2 spraying). Then, in the next few days is enough to bury 2-3 drops three or four times (or make one spray). It is desirable to provide treatment for a month.

In inflammatory processes in nasalor sinuses buried four to six times a day in each nostril 3-5 drops (or one or two spray). Treatments should be done daily for 7-14 days.

In the case of oral mucosal diseasesits corresponding portions are sprayed medicine 4-6 times a day. One procedure - is 2-3 spraying. Spraying can be replaced by rinsing. But then one bottle is enough for two treatments. The course lasts from 5 to 10 days.

When blood circulation in the lower limbs, doctors prescribe daily instilled 6 times in each nostril 1-2 drops for six months. 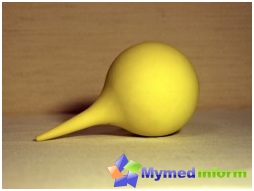 When hemorrhoids performed microclysters with Derinat, it is administered into the rectum of 15 to 40 ml. The course of 4 to 10 days.

Ophthalmologists prescribe drops in case Derinatsevere degenerative and inflammatory processes in the eye. Then it is necessary to instill the drops daily for one, two drops from two to three times a patient eye. The course can last from two weeks to six weeks.

In case of frostbite, burns, post-radiationnecrosis, gangrene, trophic ulcers on the affected area is applied 3-4 times a day intraoral bandage (sterile gauze rolled in two layers, and then it is applied Derinat). And it is possible to produce 4-5 times a day treatment of these places sprayer. Treatment long - from one month to three.

When open wounds and burns drug exhibitsMore and analgesic effects. When gangrene can occur spontaneous rejection of necrotic areas, and then the skin is gradually restored.

our site warns that the use of local Derinat compatible with hydrogen peroxide and solutions made of fat-based.

Keep the vial should be in a dark place, wheretemperature from +4 to +20 degrees. If the temperature is higher, the reduced medicinal properties of the drug component. After opening the bottle contents can be used within 14 days.

Are there any contraindications or undesirable effects? 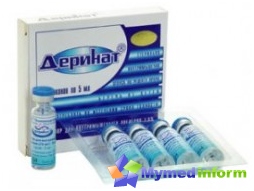 The clinical and marketing studiesWe have shown that side effects Derinat has not. The medicine can be used as the crumb in neonates and the elderly. There is only one contraindication - the drug does not apply if detected idiosyncrasy. Pregnant women are allowed to use Derinat if it has appointed Dr.

Frequent infections occur in children becausethe fact that their immune system is still not perfect and there is no immunity to many pathogens. Safe immunomodulator Derinat in the form of droplets in such situations can be of great help. Furthermore, Derinat solution shows good results when used in surgery, gynecology, ophthalmology, dentistry ...