What beautiful colors painted our world. But, unfortunately, there are people deprived of the opportunity to see the diversity of color palette. They are called color-blind. And most of this defect is subject to a strong half of mankind. So determined nature.


The history of color blindness

May tender green leaves and blood-redsunset fire, the deep blue of the sea water and the glowing yellow of the desert sands ... Lots of colors and brings peace. But whether it is the same palette for people living in the world? No, because congenital color vision different people.

The first found that some people are deniedpossible to distinguish between certain colors, an English chemist and physicist John Dalton. In 1794, he described himself inherent defect of vision: the inability to distinguish between red and green colors. On behalf of the discoverer of the flaw and is called color blindness. A special sensation discovery did not cause. It was seen more as a curiosity that leads to the small inconveniences, like the inability to collect red strawberries in a green grass. However, over time it became surprising detail: congenital color blindness - with rare exceptions - only peculiar to men. In addition to "imperceptible" occasionally refers and blue (purple) color.

One hundred years to the problem of color blindness, a newinterest - due to the rapid development of transport. On the roads there were traffic lights and color-blind driving have become a source of danger. Soon adopted measures: before receiving permission to drive, you need to go through screening tests. Anyone who could distinguish among single-color background circles figures or shapes made up of circles of the same brightness, but different color, received the right to drive. If the subject's color vision is not in order, then it can do that and do not, respectively, can be the driver.

But not only the transportation problems have drawn attention to the color blind. Interested, he and scientists: first physiologists, and then specialists in heredity.


Why do some people distinguish colors, others - no

Until now, to answer this question exhaustivelyfails. We know that located in the retina of the human eye cells, similar in shape to a chemical flask (which, incidentally, is called - cones), are divided into three types. Each type of cell is excited by one of three colors: red, green or blue. However, they all respond to other colors. The cells are special colored substances - pigments that only allows light waves of a certain length. Initiation of a "variety" of cells gives a sense of the appropriate color other than white, which is obtained when "switched on" all the cones. All other colors and shades - the complex variations of intermediate states. If in one of the cones there is no pigment, and then see the corresponding color of a person can not. In addition, because of this loss, and distorted perception of some colors. This theory, however, says not all congenital disorders of color perception. Therefore, in recent years, scientists suggest that a slightly different color-blind pigment that bad cope with their responsibilities. There's also this situation: normal pigments, but they fall into the "not their" cells - for example, "green" pigment is in the "red" cones. This confusion makes it difficult to transfer and rest, the normal signals to the brain. But explained - does not mean cure. Unfortunately, the methods of treatment of congenital color blindness does not exist yet (although in the West there were contact lenses, by which color-blind can not see the world in its original beauty). 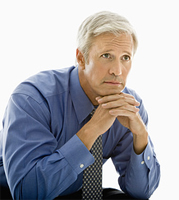 And now about why such attackIt falls mainly on men. The answer to this question could Genetics. It turned out that the "responsibility" for the occurrence of color blindness in men is on the ... women. They are hidden carriers of the defective gene that causes disturbances of color vision. Why in the male body, this gene behaves, and in women - no? The fact that a pair of chromosomes, responsible for sex of the person exists in two versions. In women, its components are identical, and in males - no. "X" Female sex chromosomes usually denoted by Latin letter. Women have two X - chromosomes (XX), and a man other than X-chromosome, there is still a small chromosome, which represent the Latin letter "y." That is, the "gentleman" set - it is XY. Color blindness gene is in the X-chromosome, and the "power" of his small. If a person works normal, unmodified gene, then express it yourself can not. It is understood that in women with two X-chromosomes occurrence of congenital color blindness is only possible when both chromosomes prove defective genes. Such a situation is extremely rare. But in the Y-chromosome gene is not capable of "drown" his partner failed, so color blindness gene manifests itself in men often enough.

Surprisingly, many people with impairedcolor vision learn about the features of his accident. It turns out that they are gradually "trained" to distinguish colors according to their brightness, which partly compensates for the lack of them. And they do it so well that "expose" this detour of perception can only specialist.


The world is black and white

Sometimes there is and achromatopsia: the person sees the world in black and white.

In addition to innate characteristics, color perceptionIt may be impaired due to eye diseases and central nervous system. This reduces the perception of all three primary colors. Early treatment is usually restores normal color.

Prolonged exposure to the color on the eye colorRetinal sensitivity can be reduced to such a state that the two different colors will be perceived as identical. This phenomenon of color fatigue.

Color fairly strong effect on the psyche and the physiological state of a person. The most beneficial effect on vision has yellow-green-blue range of colors.

Women tend to be more subtle than men, distinguish colors and be able to see more of them.