"School food is to blame" - parents thinklooking like a baby ripped apart his stomach: he has belching, heartburn is, the pain ... "It's all obschepitovskie lunches, poorly washed utensils in the dining room and eat cold sandwiches, because and gastritis."

In fact, chronic gastritis, ieinflammation of the mucous membrane of the stomach, is not spoiled by bad food canteens, and a whole range of different factors: stress, which abound in schoolchildren, irregular meals, junk food - all these kids favorite sodas, foods with preservatives, dyes, and various food additives. In general, all that we have in the ground and eat without being able to prepare meals only fresh meat, fresh fish and vegetables grown without chemical fertilizers. And pollution is very bad for our stomachs.

Previously not considered infectious gastritisdisease. But two decades ago, scientists have identified the causative agent of the disease - the bacterium Helicobacter pylori. It enters the stomach, it causes inflammation of the mucosa and the mucosa of the duodenum 12. Untreated gastritis may go into an ulcer. And at the same time it is not so simple and clear. Because children are gastritis without Helicobacter pylori. With them, by the way, you can quickly deal.

And it happens that a person is a Helicobacter,but not sick. There can be no Helicobacter gastritis and gastritis without H. pylori. But recent cases is still not common. In 80% of patients with gastritis associated with this pathogen. The bad water and bad air reduces our immunity, the body ceases to cope with pathogenic bacteria, their colony grow and inflame the stomach lining.

Gastritis occur most often in children whilewhen they start to go to kindergarten or school, and 14-15 years, during hormonal changes. Hormonal changes "knocks" the work of many systems of the body, for example, may lead to a breach of the acidity in the stomach or in violation of motor function of the gastrointestinal tract. So that the teenager is very vulnerable to the bacterium. And for 18 years we have 70-80% of adolescents already have helicobacter pylori.


Inside the closed groups

Helicobacter infects the child in the family. This bacterium is transferred only from person to person with long-term contact: through unwashed hands, everyday objects, by kissing. Gastritis, ulcers - diseases closed groups. It makes no sense to treat one child, it is necessary to treat the whole family. If the recovered child back to the family, where the focus of disease-causing bacteria are not destroyed, the worsening of the disease had to happen in three months, if not sooner. If a family only one child, the illness will resume in 7-8 months.

Doctors examining patients family in 40% of casesparents are sores that so far they have not shown themselves and the existence of which adults themselves do not suspect. Typically, such forms of the disease are women. So children are infected parents. If you treat the whole family, it is likely that neither gastritis or ulcers will not visit her more than ever. An adult person who was treated for H. pylori, there is immune to the bacteria, so that the disease returns only 1% of cases.

There are no signs of gastritis, which would bewe see immediately that you just caught this disease. But if a child are abdominal pain, heartburn, belching, violations of the chair in one direction or another - be sure to show it to the gastroenterologist.


Helicobacter is not good

Helicobacter under a microscope looks likepale blue drop of dew, which is growing a whole colony of bacteria. On the one hand, the microbe is killed by the slightest impact from outside, the differential pressure of the alcohol. And at the same time it is perfectly able to survive: a little worsened the conditions of his life as he goes into canned form - forming cocci. The cocci Helicobacter can live indefinitely: and on the dishes, and towels. Cocchi easily washed off, but getting into the water, they occupy single-celled organisms with them travel, and when once again come to our stomachs begin to actively proliferate.

For a long time in our organism Helicobacter justdoes not live. In 100% of cases it causes malignant degeneration of tissues. Only this rebirth can last from 10 to 15 years. Therefore, in children infected with Helicobacter, such rebirths does not happen. But stomach cancer in adults - is missing pediatricians gastroenterological problems of children.

Getting rid of H. pylori may be usingantibiotics, the patient is now being prescribed drug simultaneously 3-4. The course is short - last week, so there should be no gaps in the medication. Treatment is not easy. Such a large number of antibacterial drugs violates the intestinal microflora. After taking antibiotics is necessary to restore it. Additionally, antibiotics may cause allergies in a child, and this problem is solved individually in each case.

But even an effective therapy might notguarantee 100% success. Helicobacter - a very hardy bacterium, she knows how to quickly change and adapt, even very good drugs after some time cease to act on it. 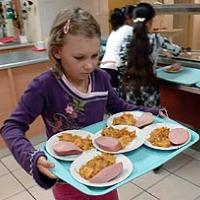 Preventing gastritis - good nutrition, hygieneand mode. The child must eat breakfast before he goes to school. It is best not a sandwich, and cereal, oatmeal desirable. Tea and coffee should be drunk rather weak, so as not to irritate the mucous membrane.

You can not make the big break between mealsfood. It is unacceptable when a teenager goes to school without breakfast and lunch only 5 hours. In this mode, it will necessarily have the disease of the gastrointestinal tract.

It is better to avoid fatty and fried foods, spicyseasonings - or at least have them occasionally, in moderation. Harmful sodas: they lead to increased acidity, increased intra-abdominal pressure, to belching, heartburn, threw the acid contents of the stomach into the esophagus. In general, the rules of a healthy diet are known to all. The main thing - to find the strength to follow them.