About such as celiac disease todaydoctors know almost everything. However, this knowledge - not more than fifty years. It is not surprising that ordinary people know little about celiac disease. What is this disease? How is life for people with this disease? For answers to these questions, let's turn to a specialist.

Probably, there is no sickness, in whichthe doctor did not recommend you at least for a time to lean on some foods and abstain from others. But it also happens that the diet is becoming a major drug. And an irreplaceable and unique, when it comes to celiac disease. Our correspondent talks to senior researcher supply of healthy and sick child NTSZD RAMS, PhD Elena Alexandrovna Roslavtseva. 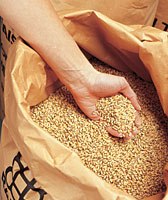 - This disease is really a "relativelynew". There is even a theory that the prevalence of celiac disease is associated with the emergence and mass distribution in the world of new varieties of wheat - with a high gluten content. From this it turns out delicious meal and magnificent bread, but the human body (or rather, the small intestine) are not yet had time to adjust to the absorption of such food, and so the disease develops. Only 50 years ago, scientists have found that celiac disease is gluten causes - wheat protein, then studies have shown that not only wheat "guilty", but other grains too dangerous for the health of many people.

Celiac disease - an inherited chronicdisease that occurs due to lesions of the mucous membrane of the small intestine proteins of some cereals (wheat and rice gluten, hordein of barley, oats, Avenyn).

- But some doctors are aware of how to identify the disease and how to treat?

- Now the situation has changed for the better. 15 years ago 90% of sick children acted in the leading medical institutions in the country with any other diagnosis - chronic enterocolitis, intestinal dysbiosis, fermentopathy, cerebral palsy and others. Now, doctors are aware of this disease, and sometimes we are faced with the problem of overdiagnosis - the diagnosis "celiac disease" put even more often than he really is. Methods of diagnosis of celiac disease by blood are indirect, they can only suspect the disease. For diagnosis requires testing and refinement - as a result of the mucous membrane of the small intestine biopsy. But this must be done necessarily in the acute stage of the disease (not more than two months after the start of the diet, and the best - before). There are cases where doctors suspected celiac disease, prescribed diet, and six months later sent for examination, - it is wrong and harmful.

- How many Russian patients with celiac disease - is unknown. There are no global statistics, studies have not been conducted. International same statistics the last years of celiac disease is very disturbing - the figures are frightening. In the 70 years it was believed that the disease is rare, its incidence is 1 case per 4-6 thousand. Population. But when 10 years ago, have spread serological diagnosis of celiac disease (blood-specific antibodies are determined), and it became possible to carry out mass population survey, there were very different data.

Today, it is believed that in Western European countriesill 1 of 100-200 people, or one percent of the population has atrophy of the mucous membrane of the small intestine. That is, these people, or sick, or are at risk at any time to have a serious health problem.

It is known that if the family who is ill with celiac disease, the patient's risk of giving birth is 10%. Higher risk in families where there are patients with diabetes mellitus.


- Is there a cure celiac disease?

- The disease is incurable - it is for life. While all manifestations of the disease can be minimized and even almost get rid of them. But this, unfortunately, does not mean a cure, since the mucous membrane of the small intestine life remains sensitive to gluten.

- What are the symptoms of celiac disease? At what age a person can be suspected and determine exactly this disease?

- In the classic manifestation of her celiac disease - aexample of the violation of the intestinal digestion and absorption - manifested prolonged diarrhea in combination with the "violation of nutritional status." Simply put - depletion. And as a consequence - different deficient states. For example, a deficiency of vitamins and minerals in the body leads to hair loss, nails do not grow, the skin becomes dry, becomes inflamed mucous membranes of the mouth (stomatitis). Because iron deficiency anemia, spoiled teeth.

Generally, celiac disease is most often evident in thea very early age - in the first and second year of life. That is, as soon as the child beginning to or semolina porridge, bread, crackers ... It's all foods that contain gluten. The latent period can last from several days to several months, and then the child has broken a chair (or becomes liquid or very abundant) and changing behavior. The child, as it were "losing interest in life", a kind of "child depression" when the baby does not want to communicate, aims to be one, sluggish. Sometimes - very irritable and aggressive. Disturbed appetite - from the absolute refusal to have the desire to eat constantly. Nor yet a child lose weight, and fast, and very significantly, that can not be ignored - such children reach the malnutrition status 3rd grade! At the same time the child's stomach increases. In severe cases develop protein-free edema.

Of course, if symptoms such large and bright, the baby is usually quite quickly sent to the specialized departments in the hospital.

- But if the disease is congenital - why some it manifests itself very early, while others live for years quietly and do not even know about it?

- This question is still not answered. It is not known how the process starts in the intestine villus atrophy. There are many people who have celiac disease occurs is hidden. They may not have any complaints and consider themselves healthy.

- So maybe they really healthy? Why should they be treated for celiac disease?

- First, it must be borne in mind that the treatmentceliac disease is only in strict observance and lifelong gluten-free diet. (In the acute phase, when the child is malnourished, and so, of course, need to be treated, including vitamins, enzymes, sometimes -.. And then the hormones -. Only diet.)

If a person is ill with celiac disease, but lead a normallife without any restriction in the diet, it is about 400 times greater (compared with others) the risk of malignant diseases of the gastrointestinal tract. Compliance with the diet for 5 years reduces the risk to the population.

How to live without bread

- What products fall "under the ban"?


- Certainly toxic cereals of celiac disease are considered to be wheat, rye, barley. Protein these cereals is fatal to humans who are suffering from celiac disease.

Under great suspicion oats. Now a study conducted by the World Health Organization to ascertain the toxicity of this cereal. According to our practical observations, in all kinds of oats, too, must be excluded from the diet. But the official conclusion will be only after the completion of the study.

Patients with celiac disease can not eat bread and bakery products, cakes, pasta and so on. And absolutely all the other products that contain "hidden" gluten.

- Though it is difficult, but that's probably how it is possible to live without bread and pasta?

- But it is important that a single gram of gluten is not rankedin the body. There is no difference - polbatona white bread or a spoonful of flour in the composition of dishes! The destructive effect is the same. And here's the list of banned products begins to rapidly expand! Many foods, such as yogurt, sauces (ketchup, mayonnaise), sausages, boiled sausages, instant coffee, and the rest are composed glyutensoderzhaschie substance, without which their production technology impossible. But on the packaging do not indicate - it contains gluten or not. Moreover, even the single tests does not guarantee a particular "purity", for example in the same yogurt may include starch, but the technology is not important - if whether wheat rice, yogurt quality eventually is not affected. And for the sick person is very important!

- Is it possible for a person compliance with lifelong special diet?

- In our case - it is very difficult. In the major cities are sold gluten-free foods (special icon is placed on the packaging). But they are significantly more expensive than usual. A stack of cookies - about 200 rubles. Pasta - 170 rubles per pack ...

Follow a diet is easy when the baby is still small. But it is growing, and there he and his parents will face serious problems, more social than medical.

Such a child can not be given to normal childrengarden; he can not go to visit, birthday another (because there is certainly a cake, candy, pies!) and loved by all the children, "McDonald's". In school these children are forced to walk with her, a special meal.
In accordance with the Ministry of Health by the order N 117 of 1991, children with celiac disease recognized as disabled from childhood. Currently, the definition of disability function transferred to the Ministry of Labour and Social Development. Today disability such patients are often removed. Technically, this is correct, because the subject of diet, they look perfectly healthy, in their order all the tests! However, they are people who are sick and need to be seen by specialists every year to comply with expensive diet.

Another problem - the young men to be recruited intoarmy. I believe that young people with celiac disease should not be drafted into the army, so long as it is not possible to arrange individual catering there. But in the Ministry of Labour Social Security or the Ministry of Defence that the issue is not resolved in any way - just not seen!

This is really an important social problem. It turns out that the government is more profitable to spend huge amounts of money for the treatment of cancer and severe autoimmune diseases, people lose a young, working age than to organize social assistance and the possibility of dieting. After complications in patients who are unable to keep to a diet, developed as early as 30-40 years. Probably, patients with celiac disease do not need permanent disability. In European countries, they simply receive benefits - compensation for food; in some countries, prescriptions for these products are prescribed by doctors. But to solve these issues need to be today.

In developed countries, most social assistancepatients have created a society where celiac disease. For several years in St. Petersburg, active regional public organization "Emilia", which brings together about 800 patients with celiac children and their parents. They were able to organize the import of gluten-free products from abroad, to negotiate with some domestic manufacturers, to open a store gluten-free products. The Company now rest in a specialized children summer children's camp, opened a few special groups in kindergartens.
Recently, such an organization is registered and starts its operations in Moscow, it is called the NGO "Help the patient with celiac disease."