Toxoplasma - a single-celled parasite, living inorganism many mammals and man. It is estimated that it infected every fourth inhabitant of the Earth. In most cases, toxoplasmosis is asymptomatic, but in people with weakened immune systems it can lead to dangerous complications.

The causative agent of toxoplasmosis

Toxoplasmosis - a disease pathogen which is neither a virus nor bacteria. Toxoplasma causes it - widespread in the nature of "the beast", a representative of the simplest type. 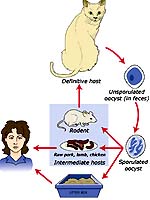 Public awareness of who thesesimple, exhausted, as a rule, information obtained in high school. Harmless and entertaining ciliate-slipper - simple, cute cilia moves and does not cause anything other than sympathy (especially if you do not have to explain to the teacher what was inside her).

Toxoplasma, under a microscope, is also quitecute, reminds, however, not the shoe, and a slice of orange, but that's all the positive comparisons end there. In Latin it is called Toxoplasma gondii - in honor of living whether in Tunisia, or Algeria rodent Gondi, who Toxoplasma was first discovered already in 1908.

Since that time, I managed to find out about toxoplasmosisalmost all - both replicates how the transmission is how the disease develops. Known symptoms, methods of treatment and prevention. But patients with toxoplasmosis becomes smaller - perhaps because very few have the information. Let us together join the small circle of initiates.

Toxoplasma is able to reproduce in two ways -sexually and asexually. In both cases some intermediate form, and each form has its own name. These names even to utter terrible - could not help the impression that they (these names) is specially invented for the mistreatment of medical students that turn gray, pull limbs and depressed at the thought of what the exam in microbiology stretches the ticket with the word "toxoplasmosis".

Do not believe me - see for yourself. Only two quotes from the textbook of microbiology:

"... Part of the parasite penetrates the epithelialintestinal cells, where the process to form schizogony 4-30 merozoites. After several cycles of reproduction formed microgametocytes makrogametotsity and, as a result of the merger which formed oocyst. "

And in the book written about trophozoites, tachyzoites and bradyzoites.

Well? I think that comment is superfluous - that's you and really easy!

Why it is still important to know that there are two ways of reproduction?

The fact that, in the intestine reproducing sexuallyby, Toxoplasma cysts form is very resistant to environmental factors. Leaving the intestines, they can survive for a long time, not afraid of drying, low and high temperatures and, consequently, are a source of infection to other organisms. If asexual reproduction - the disease occurs, but the "victim" is practically not contagious to others (resistant cysts are not formed).

Toxoplasmosis suffer many animals - and the wild,and home. Dogs, cats, rabbits, monkeys, pigs, mice, squirrels, chickens, pigeons, etc. -.. Only about 300 species of mammals and 60 species of birds. Man, too, is ill. But!!! Sexual reproduction Toxoplasma occurs only in the intestine of dogs and other members of the cat family.

It is very important precisely because, illtoxoplasmosis, neither man nor dog or chicken or guinea pig does not become infectious. In short, toxoplasmosis - an individual problem of a particular individual. This individual can not literally have eating (ie, engage in cannibalism:.. Meat - a source of infection), but everything else with it (this individual) prodelyvat can: kiss, hug, eat from the same plate, to have sex, while the probability of contracting toxoplasmosis is practically zero. It is not necessary unless the blood transfusions yes organs transplanted from it - although in this case the "catch" the disease is very problematic.

It was only a cat - sweet, fluffy, gentle andcharming - a potential source of infection and the main distributor. And if the child will play in the sandbox coveted cats, toxoplasmosis him (child of) guaranteed by almost 100%. And if your favorite mew though sometimes leaves the walls of the apartment, if it at least occasionally eat raw meat - toxoplasmosis her there with the greatest possible degree of probability.

Food for Thought: 15-20 days of illness one cat distinguishes the external environment about 2 billion cysts, which retain their infectivity to two years!

To catch toxoplasmosis can be tasted meat,for example, an infected rabbit, sheep, pigs and so on. d. Meat, of course, should be eaten raw, because the slightest heat treatment kills the toxoplasmosis. People rarely eat raw meat, but beef cutlet lick tongue - it familiar to many housewives. As a result - and no cat was present and toxoplasmosis. 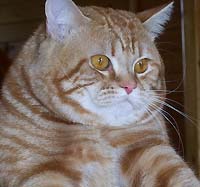 Another way of infection - eating unwashed fruits and vegetables: in the gardens and orchards, as it is known, is found a lot of nice representatives of the cat family.

Stop immediately! No need to drive out the cat out of the house! Do not pull the child out of the sandbox! Do not wipe the alcohol apples!

Given the ease of infection (and cats, and unwashedfruits and vegetables in our lives enough) not to meet with Toxoplasma during life is difficult, but because the sick around us is not very much. It turns out that in fact toxoplasmosis is not so bad as it might seem at first glance.

The fact is that the body of a normal person -be it an adult or a child, it is quite easy to cope with toxoplasmas. After the parasite enters the gastrointestinal tract, a complex response occurs, but the result is almost always predetermined - the production of antibodies that neutralize toxoplasma and the formation of a stable (for the rest of life) immunity.

An interesting fact is that even the very firstinfection accompanied by fairly substantial reaction of the immune system, as a rule, does not cause any symptoms - the person feels completely healthy and in fact the way it is.

The logical conclusion: Toxoplasmosis is not any substantial problem for only one, but a mandatory condition - the presence of a person full immunity. It is not surprising that patients, such as AIDS when infected with toxoplasmosis develops almost always. Peacefully dormant in the body Toxoplasma can be activated and cause severe disease on the background of any action (irradiation, the use of immune depressing drugs) or diseases (herpes infection, cytomegalovirus infection, infectious mononucleosis, and so on. P.), Leading to decreased immunity.

I would like to draw attention to the factfact that for the occurrence of toxoplasmosis reduced immunity should be pretty significant. If a child regularly run snot if the doctor "not like a blood test," if after the next ARD could "earn" an inflammation of the lungs, etc. -.. This is not a reason to grieve, to panic and to communicate with a cat only with gloves and mask.

Again, if a person is diagnosedtoxoplasmosis - not just discovered or Toxoplasma antibodies thereto, and if there are specific symptoms of the disease - you should always send some effort to find a causal factor that led to such a marked reduction in immune defense. Not surprisingly, it discovered toxoplasmosis is an important and indispensable basis for a thorough examination primarily for HIV (human immunodeficiency virus - the causative agent of AIDS).

Since we mentioned the symptoms of the disease,we note that they are not specific (except for eye damage). E. There is no specific clinical features that make it safe to diagnose toxoplasmosis. Toxoplasma spreads through the bloodstream from the intestine and lymph nodes, and in the internal organs, affects the nervous system - it is clear that the symptoms can be very diverse.

The most common symptoms are limited to a smallenlarged lymph nodes (usually cervical). There may be fever, enlarged liver and spleen, sore throat. In more severe cases developed pneumonia, affected the brain (encephalitis), the inner lining of the heart (endocarditis), possible specific lesion organ of vision - inflammation of the retina and choroid (toxoplasmosis chorioretinitis) and (or) inflammation of the uvea (toxoplasmosis uveitis ).

Symptoms of yeast infection in women. Treatment and prevention of ...

Diagnosis and treatment of bacterial vaginosis