Home>Gynecology>Discharges from females. Where are the norm, and where pathology?

Discharges from females. Where are the norm, and where pathology?

Excretions from the genital tract accompany eachthe representative of the weaker sex from adolescence. This is normal. But what should be “healthy” discharge, and when is it worth to sound the alarm and run to the doctor? 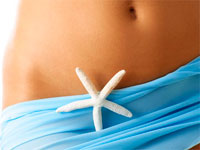 At least seven out of ten women, come to the reception to
gynecologist with complaints of discharge from the genital tract. In some cases - is
the only concern in the other - from the genital tract are combined with
unpleasant and painful symptoms, most often, such as itching, burning, pain
in the area of ​​the external genitalia and lower abdomen.

The appearance of precipitates
of the genital tract in healthy the fairer sex coincides with the period
pubertyThat due to changes in hormonal saturation
and forming the body of the menstrual cycle. The combined effects of estrogen and
Progesterone induces changes in the genital tract mucosal tissues, resulting in
an increase in mucus production, release of moisture, accumulation of glycogen in the cells
epithelium, increasing the number of lactic acid bacteria, called sticks
Dederleyna and form the basis of the vaginal microflora. During his
livelihoods Dederleyna sticks isolated lactic acid and peroxide
hydrogen constraining growth and kill the pathogenic bacteria penetrating the
genital tract with external genitalia. In addition, surface layers
vaginal epithelium is constantly updated, and the composition of the supplement excreta
rejects, dead skin cells covering the genital tract.

Vaginal discharge
from the genital tract of healthy women always have a white color with a light grayish
shade, sour odor, homogeneous creamy consistency.
The number of discharges for each individual woman and depends primarily
hormonal saturation level of the body, but the average is to
a few milliliters per day. Moreover, in the first half of the menstrual cycle
discharge is less, and the second - a slight increase.

Normal from the genital tract does not contain impurities
pus, mucus, blood, they are homogeneous, do not stray into clumps and flakes. In the middle
menstrual cycle in healthy women vaginal discharge mixed with
discharge from the cervix - a small amount of clear mucus,
indicating ovulation has occurred. Other impurities are considered
pathological.

Pathological
discharge from the genital tract called belyami. Character cables in
a lot of evidence about the disease, will serve their cause. Mucous or
muco-purulent leucorrhoea may be a symptom of chlamydia, ureaplasma or
a viral infection of the genitals, purulent fluid - a sign of gonorrhea or
trichomoniasis. Yellowish cheesy discharge typical of fungal infection or
candidiasis. Liquid bleach white with the smell of fish characteristic of bacterial vaginosis.

Watery whites often have tubal origin,
there they go down into the vagina of the upper sections of the genitals and often
evidence of serious pathology that requires urgent treatment to the doctor.

Bloody issues
from the genital tract of an adult woman normally appear only during
menses and should not last for more than 6 days. Thus menstrual
allocation should not be abundant, must not contain any large blood clots
and mucosal tissue pieces resembling beef liver. The gap between
menstruation should be at least 10 days, otherwise, allocating
referred to as uterine bleeding that requires treatment.

Spotting for a few days
early menstruation - a symptom of cervical endometriosis, protracted this phenomenon
end of menstruation alarming in terms of uterine endometriosis. Finally,
the appearance of blood after sexual intercourse more often indicates the presence of cervical erosion
uterine or vaginal mucosa lesions.

Scarce spotting in the middle of the menstrual
cycle indicate a lack of hormonal saturation in formation
or pathology of the menstrual cycle. Sometimes they occur in women taking
hormonal contraceptives, and in this case are not considered abnormal. Even
meager, barely noticeable bleeding from the genital tract during
Menopause - always a signal of serious trouble, a possible sign of cancer
genitals.

As you can see, isolation
of the female genital tract - difficult symptom analysis available exclusively
specialist. So do not guess and determine the cause of pathological self
secretions or, even worse, trying to get rid of these home remedies. AT
the best case you will lose precious time, and instead start the disease
that, doom themselves to handle small tools and a long
expensive treatment. The optimal solution - immediately contact your gynecologist
and solve the problem correctly, as befits a civilized people living in
century of medicine.