Menstruation - the most important physiologicalprocess, typical female body. This is not just a monthly phenomenon, often accompanied by pain and poor health, and is an indication that a woman is capable of fulfilling its natural purpose - to be a mother. 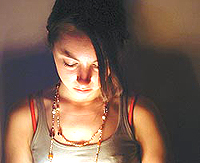 One can hardly overestimate the importance of thisprocess because it can be said to based the existence of life, reproduction of the human race. Therefore sexual illiteracy of the female population, inattention to violations of the menstrual cycle is a major problem even in our days.

Probably every mother able to explaingrown-up daughter how to use pads during menstruation, but not everyone is able to intelligently explain why the female body is this process that is the cause, as it takes place. Many women are generally shy away from such conversations, oblivious to the fact that once the girls grow up, too, will become mothers, and they may have to face the same issues. And, unfortunately, often to such conversations families imposed such strict taboos that girl, first saw on their panties bloodstains, just afraid to admit it to my mother. This may be not only the cause of the early gynecological diseases leading to infertility, but also a flagrant attack on the child's psyche.

The appearance of the girl's menstruation

The appearance of the girl's menstrual period - the first signthat the process of puberty began in her body. Typically, this process takes place at the same time interconnected with physical development. In other words, the beginning of menstruation, breast growth, pubic and axillary hair is in parallel with the rounded hips, pelvic extension and other changes in the figures. These signs indicate that the girl began to turn into a girl. Puberty lasts about 5-6 years, and during this period of time in the body there are cardinal changes. In every woman's ovaries from birth, "laid" by 100-150 thousand immature egg cells. When the process begins puberty, the brain sends a signal to the ovaries, which makes one of the eggs to mature. One of the ovary, in turn, sends a signal to hormonal uterus and begins to prepare for the impending mucosal changes: mucosal thickness increased from 1 to 10 mm, there is formed a plurality of blood and lymph vessels, and glands. The uterus becomes soft and juicy, that is ready to become a receptacle for the conceived child. 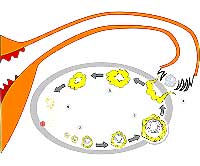 After two weeks from the beginning of ripeningthe egg is mature, and it is released from the ovary into the fallopian tube. This process is called ovulation. Then there are two possibilities: either the egg "faces" with the sperm and fertilized or die. If fertilization has not occurred, that is, the egg was lost in the womb prepared to conceive, begins the process of rejection of thickened mucous membrane. It exfoliate from the inner surface to expose the blood vessels. Thus, the wall of the uterus become a continuous bleeding "wound." This is menstruation. It is repeated every month until the very long as the fertilization of the egg will not happen or will not start menopause.

Each time the emergence of the first girlsmenstruation individually, because it all depends on the age at which puberty begins. On average, gynecologists called numbers from 11 to 15 years. As a rule, if a 15-year period does not appear, the parents must be a cause for concern. If menstruation does not occur, and after 17 years, it is indicative of a very serious disturbances in the body's development. It requires expert advice, which is obliged to conduct a full examination, referred for tests and determine the cause of delayed puberty. It should be noted that healthy girls start puberty depends on hereditary traits, that is, first menstruation she will have about the same age as her mother, grandmother or aunt.

Duration of the menstrual cycle

The duration and regularity of menstrualcycle - the first indicator of how healthy woman in intimate terms. It is important to clarify that the cycle length and the duration of menstruation itself - different things, and they do not need to be confused. A cycle is considered to be the time from the first day of one menstrual period to the first day of the next, but directly menstruation - the number of days in which there is an allocation of blood and bleeding. If the menstruation duration can be different in different months, and it does not cause particular concern, the cycle time fluctuations talk about violations in the body.

The regularity of the menstrual cycle

It should be noted that the menstrual cycle quicklyIt becomes a regular in only 30% of women, while the rest require a minimum of one year in the "installation". The ideal gynecologists consider a 28-day cycle. It is often called the moon. In other words, if the first day of one menstrual period to the first day of the next always takes 28 days, it's just great. On average, the normal cycle should not be less than 21 days and more than 35 days. Within this framework, the allowable difference between adjacent cycles can be up to 10 days. If the number of days beyond these limits, but still constantly is different, consult your doctor. Perhaps, in this case, there are irregularities in the ovaries.

It is also important to consider the fact that the reasons formenstrual disorders often are not gynecological disease or abnormalities, and most ordinary stress, climate change, poor environment, nervous stress. All this adversely affects the female body, its general condition, as shown in the first place in the "race" of the cycle. Therefore, if the cycle is lost, do not immediately panic and run to the nearest antenatal clinic - it is necessary to recall whether there have been in the recent past these factors. Perhaps, to restore normal menstrual cycle length will be satisfied with the simple sedative or termination of acclimatization.

As for the duration of the mostmenstruation, then there accurate data can not be provided as purely individual for each woman the number of days. The norm is 3-7 days, but sometimes it happens and 2 days, and 10 days. Furthermore, the lifetime of menstruation duration can vary - in adolescence, say 2-3 days, at 25-40 - 5-7 days, after 40 years - again 2-3 days.

The most abundant blood is released in the first twoday of menstruation, and the rest of the selection is much poorer, that is, are the so-called "remnants". This situation is considered normal for a healthy body. If copious all the days, you should consult with a gynecologist. But there is a caveat: abundant, as well as painful periods are the norm in the case, if a woman uses birth control such as the intrauterine device. The only thing that should cause concern - increased duration of menstruation. Even with a spiral it should not last more than 7 days, if it is not a feature of a particular organism.

Follow your cycle, the woman must payaccount not only the quantity but also the quality of the bleeding. Normally, menstrual blood has a specific smell, does not coagulate fully, but may contain some clots that occur during very heavy discharge. If a woman uses the spiral, these clots are a pieces of a fertilized egg, which was torn uterus. A very large number of clots and their granular structure indicate the presence of disease or infection.