Home>hepatology>It does not hurt the liver? It's time to heal

It does not hurt the liver? It's time to heal

Liver - a unique body in its ability torecovery. Only 8% of people in time are identified early signs of impaired liver function. Under conditions of stress, improper diet, effects of alcohol, chronic diseases (hepatitis, cirrhosis), liver ceases to cope with detoxification, and toxins accumulate and circulate in the body, causing a negative impact on all its systems, particularly in the brain cells. That's why the first signals of Hepatitis issues are not pain in his right side, and impaired attention, slowing of motor reactions, coordination and thinking.


For most people, the fall - the returnall the "charms" of urban life with the usual bustle, ragged rhythm, "snacks" on the fly, and long hours in traffic jams. All the less we remember the exploits of holiday life, more and more - the forgotten summer of chronic diseases.

In this case, when the disease itself recallscurrently, forcing to see a doctor - is not a bad option. Some authorities may not give the necessary clues. Very insidious in this sense, our liver. 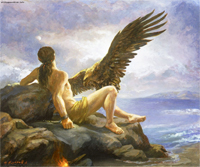 Liver - a unique body in its ability torecovery. This was known by the ancient writing the myth of Prometheus. According to the myth, every day bird of prey flew hatch and liver chained to a rock hero, and every time that night the liver was restored again. We are too often chained, like Prometheus. Only in the middle of city highway instead of mountain air - repeatedly exceeds all conceivable norms of exhaust gases concentration. And the constitution, many of us do not Promethean. Modern man often suffers from excess weight or, conversely, from the unthinking deal with it (fasting state after bariatric surgery). Very common adverse factors such as consumption of alcohol, disorders of lipid metabolism, diabetes mellitus type 2. The norm for many has become taking certain medications (corticosteroids, hormonal contraceptives, tamoxifen, nonsteroidal anti-inflammatory agents, antibiotics).

In unfavorable conditions, the liver cells beginwork harder, and liver for a long time, unable to maintain the desired level of exchange of biologically active substances, immune defense and hematopoiesis. Harder with the disposal of toxins.

Toxic substances not only act inbody from the outside (eg, alcohol or drugs). They are continuously formed during the exchange process. For example, the decay of food proteins. In a healthy liver, the body quickly and effectively connects these substances immediately after their occurrence, and removes from the body. Under conditions of stress, improper diet, effects of alcohol, chronic diseases (hepatitis, cirrhosis), liver ceases to cope with detoxification. As a result of circulating toxins accumulated in the body and negatively affecting all of its system.

The most susceptible to the effects of toxinsbrain cells. That's why the first signals of Hepatitis issues are not pain in his right side, and impaired attention, slowing of motor reactions, coordination and thinking.

Such signals quite difficult to recognize andassociate their appearance with liver problems. Due to the lack of obvious symptoms in only 8% of people in time detected early signs of liver function. This is very dangerous, especially for the inhabitants of megacities. For example, German scientists analyzed the link between early manifestations of disorders of the liver and driving quality, found that drivers with Hepatology problems make mistakes 10 times more frequently than in the control group, as the condition of the liver and its ability to neutralize toxins greatly affects the speed psychomotor reactions person.

In addition to affecting the brain, toxins deterioratestatus of other organs, including the liver itself. There is a "vicious circle": the cells are trying to neutralize the toxins, but they suffer a negative impact. In this situation, the local effects on the liver is insufficient. We need a fundamentally new, intelligent approach.

German drug Hepa-Merz provides a firstdetoxify the body: binds and removes toxins, thereby facilitating the work of the liver, "unloading" it, and - most importantly - do it quickly. At the same time Hepa-Merz improves energy metabolism in the liver cells, which is very important to have enough strength to recover and start working normally.

To improve the binding and hepatictoxins enough to take 1 sachet of granules Hepa-Merz 2-3 times a day by dissolving them in a glass of water. The normal state of health can come back pretty quickly, but for a sustainable effect requires at least 2-3 weeks. Especially if the impact of negative factors can not be completely ruled out.

Hepa-Merz drug helps people gain vigor in the afternoon, a normal night's sleep and mental clarity. And safety on the road, of course!

Modern Prometheus buys Hepa-Merz. Always talking to your doctor and learn about contraindications.