Scarlantine symptoms appear suddenly, immediately at the end of the incubation period. Know how scarlatina looks like, what is the difference between rashes during scarletin from other diseases, should every parent. 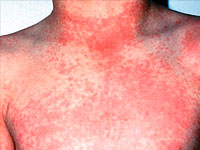 Scarlatina refers to the category of acute infections caused by beta hemolytic toxic streptococcus. The clinical picture of the disease is due to the septic and allergenic effect of the causative agent of infection and the influence of the toxin allocated to the child.

Scarlantine incubation period in children from 1 to 10 days. This period of time is needed to accumulate the causative agent of infection, flows hidden against the background of complete well-being. Scarlantine symptoms appear suddenly, grow quickly and require urgent action, delay is fraught with complications that pose a threat to the child's life, so every parent should know how Scarlatina looks like.

The main manifestations of infection are 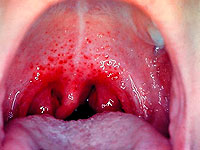 The beginning of the disease is acute, characterized by increasing body temperature, malaise, weakness, headache, heartbeat, unpleasant sensations in the abdomen, sometimes vomiting. The child becomes sluggish, apathetic or the opposite, excited and movable.

Angina's development marks the sore throat, refusing to eat. Zev kid looks «flaming», Bright red, edema, and hyperemia is stronger than with an angina. The sign of the Scarlatinous Angina is the presence of a clear line of transition of the mucous membrane in a solid sky. Angina is accompanied by an increase in submandibular and frontal lymph nodes.

The language of the sick child is first covered by a grayish-white rode, but 4-5 days cleaned and becomes raspberry with small bright red dots — inflamed taste nipples. In severe cases, the lips of the kid acquire. Signs of angina begin to regress, against the background of general intoxication, tachycardia remains and moderate increase in blood pressure.

Skarlatin rash appears for 1-3 days. Small point elements are located against the backdrop of blusted skin, in the places of friction, in the armpits and inguinal areas, on the neck and elbow bends, can merge, forming characteristic dark red stripes.

What scarlatina looks like? The child's face was covered with a red ripper in the cheeks area, his forehead and chin, the nasolabious triangle pale, on his background, bright red swollen lips stand out. When pressed on the rash, she pale is pale, but soon appears again. In some cases, along with typical scarlet elements, tubercles and bubbles appear, sometimes there is no rash at all.

The child's well-being is improved by 4-5 days: the temperature decreases, the rash pale and disappears by the end of the week, the skin begins to peel, the severity of peeling and its duration is directly proportional to the rash intensity.

In the absence of complications, recovery comes to 7-10 days from the beginning of the disease. Within 12 days, the child should not attend kindergarten or school in order to avoid contact with children. Until 21 days from the moment of the appearance of the first symptoms, it remains contagious for others.