You have removed the gall bladder, colic but there again? Learn from this article why. 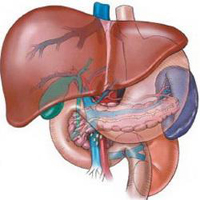 Cholecystectomy (gallbladder removal) isthe most common operation of all the operations that are carried out on the abdominal organs. More than half of patients after surgery noted good results, while about 20% remains various disorders or pain of the digestive function of the gastrointestinal tract. Most of these complaints relate to postcholecystectomical syndrome.

Strictly speaking, postcholecystectomical syndrome -This syndrome is a functional restructuring of the biliary system after surgery. It includes the sphincter of Oddi motility disorders (muscle pulp outlet of the common bile duct into the duodenum) and violation of the motor function of most of the duodenum. More often than not there is a violation of the tone of the sphincter of Oddi by type of hypotension or hypertension.

However, to postoholetsistektomicheskomu syndromeattribute and state reasons which were not removed during surgery. It left in the ducts stones, constrictive papillitis or stenosis of the bile duct, bile duct cysts and other mechanical obstruction in the bile ducts, which could be removed during the surgery, but for various reasons have gone unnoticed. As a result of surgical intervention could occur damage to the biliary tract, narrowing and scarring of the bile ducts. Sometimes there is an incomplete removal of the gallbladder, or the pathological process develops in the cult of the duct of the gallbladder.

The cause of the syndrome may postcholecystectomybecome a gastrointestinal disease that evolved as a result of the prolonged existence of gallstone disease, which occur more after surgery. This chronic pancreatitis, hepatitis, cholangitis, duodenitis and gastritis.


The stones in the bile ducts

It is believed that the most frequent cause ofpostcholecystectomy syndrome there are stones in the bile ducts. Stones can be overlooked and left in the ducts during surgery or the newly formed. Patients complain of pain in the right upper quadrant, which are paroxysmal in nature and are accompanied or not accompanied by jaundice. During the attack can be detected dark urine. When you left the stones first symptoms appear soon after surgery, and for the newly formed stones takes time.

Constrictive papillitis - a narrowing of the largeduodenal papilla (confluence of the common bile duct into the duodenum). Stenosis of the major duodenal papilla develops due to damage papilla stones, spread it inflammatory changes of the bile ducts. When narrowing occurs papilla violation of the outflow of bile, which is manifested by itching, jaundice, fever. Some patients develop chronic or acute pancreatitis, due to violations of the outflow of pancreatic secretion.

Quite often in patients undergoingcholecystectomy common chronic pancreatitis. Its origin is usually associated with the violation of the outflow of pancreatic secretion. Patsintov concerned about pain in the upper abdomen, which are shingles character. Nausea, sometimes vomiting, digestive disorders. 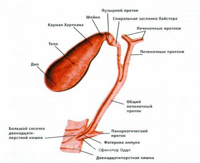 In the presence of chronic pancreatitis patientsrequires acceptance of enzyme preparations: Festal, Digestal, pancreatin. To normalize the microflora in the intestines are used bifikol, Lenexa, baktisubtil. Sometimes it is necessary to apply the endoscopic dissection of the sphincter of Oddi (endoscopic sphincterotomy). Appointed physiotherapy, physiotherapy, spa treatment.