The main symptoms of biliary dyskinesiaassociated with pain in the right upper quadrant, which are aching in nature and give the right shoulder blade. The attack of biliary colic is accompanied by disruption of the heart and the feeling of fear.

The causes of biliary dyskinesia

Dyskinesia of the gall bladder is seen aspsychosomatic illness, when the trigger is stressful situation, the deep personal conflicts. The fact that negative emotions and stressful effect on motor activity of the gallbladder. Reduced, in particular, the production of bile, it stagnates in the gall bladder. In a large percentage of cases detected different kinds of family, sexual and professional difficulties.

A significant role in the development of this diseasealso play a violation of the nervous regulation of the gall bladder, a change in the level of internal hormones of the gastrointestinal tract, menopause, lack of ovarian function, adrenal and other endocrine glands.

Besides as psychogenic disordersetiological factors is called a food allergy. In addition, dyskinesia can join cholecystitis and cholelithiasis. Hyperkinetic form (increased contractile activity) occurs reflexively with ulcers, colitis, appendicitis, and some other diseases.

Frequent but irregular meals, excessivepassion for spicy dishes, the systematic use of food spices, irritating the mucous membrane of the digestive tract predispose to the occurrence of hyperkinetic dyskinesia.

Parasitic, helminth infections of the digestive tract often occur with pronounced symptoms of dyskinesia of the gallbladder and biliary tract. 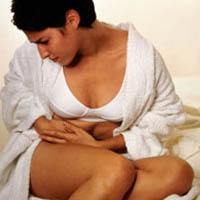 Patients, especially complain of pain in the righthypochondria. They are uncertain, dull, aching, sometimes "give" in the right shoulder, right shoulder, lasting from several hours to several days. Such pains are characteristic hypokinetic dyskinesia of the gallbladder. When hyperkinetic diskinenzii pains are sharp, cramping, often short-lived. They may increase after a heavy meal, especially greasy, spicy. Often there is bitterness in the mouth, especially in the morning. On the part of the mind in patients with dyskinesia predominant symptoms of depression, emotional, and physical weakness. Patients complain of constant fatigue, bad mood, sleep and appetite disorders, often in males decreased libido in women having menstrual problems. Sometimes an attack of biliary colic is accompanied by a sensation of cardiac arrest or, on the contrary, increased heartbeat, numbness in hands and feet, anxiety, etc.

As doctors note, patients often hypothesize about his "very serious" condition and actively convince the doctor that he was right.

The disease is usually long with periodsexacerbations (often provoked by emotional stress, elimentarnymi disorders) and temporary improvements. Over time in the gallbladder and the ducts may be formed inflammation or gallstones.