Aspergillus - a small, invisible to the eye fungus, andhow much damage it can bring to man. What kind of "living space" prefers this invisible enemy and what consequences for humans is fraught with such "neighborhood" - You will learn by reading this article. 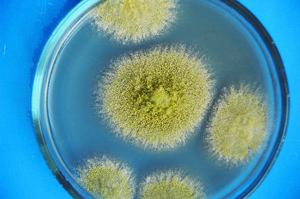 Aspergillosis - infection,caused by the fungus Aspergillus, in which most often affects the lungs. The culprit of the disease - the widespread molds (fungi) of the genus Aspergillus. This fungus is normally present in the compost heaps around the housing, and on food in humans.

In humans, fungi can settle inthe oral cavity, on the skin and entering the respiratory tract, generally affect the lungs, the trachea and bronchi. However, if the body is healthy, but there is a so-called temporary carrier. Aspergillus Some people present on the skin, cause an allergic reaction, even if they are not embedded in the fabric and not cause disease. In the case of a reduced resistance (after excessive or prolonged use of antibiotics, severe exposure to radiation, and is particularly common when the heart or liver transplant) patients may develop aspergillosis already "seriously."

Aspergillosis occurs when the fungus got onbody surface invades deeper tissues such as ear canals, or the lungs, especially in a person suffering from tuberculosis or bronchitis. The balloon may be formed light, consisting of a mass of fibers fungus, leukocytes and fibrin fibers. He gradually increased, destroying lung tissue. People with suppressed defense mechanisms, ever undergoing heart transplantation or liver, mushrooms can be spread with the blood to the brain and kidneys. At risk are also people with infections, aspergillosis - a rare complication of AIDS patients.


Aspergillosis can be different

Aspergillosis of the ear canal (often mistaken forotitis externa) is accompanied by itching and sometimes pain and minor secretions. In this case, the liquid flowing from the ear at night, can leave stains on the pillow.

Pulmonary aspergilloma can proceed withoutsymptoms and be detected only with X-ray examination of the chest. However, it can cause repeated hemoptysis, and in rare cases, serious and even lead to fatal bleeding outcome.

Disseminated aspergillosis infection or moredeep tissue - a very serious condition. The disease is manifested by fever, chills, shock, delirium, and the formation of blood clots. Possible kidney and liver failure (jaundice accompanied), difficulty in breathing. This form of disease can also lead to a heart attack, the appearance of blood in the urine, urinary tract obstruction. The most dangerous - is something that can quickly lead to death, which unfortunately is not uncommon.


The fight against aspergillosis, or how to recognize and destroy the fungus

To establish a diagnosis of aspergillosis oftenis to analyze the symptoms of the disease closely enough. If possible, take a sample of the infected material and sent to a laboratory for sowing. The definition of mushroom species can take several days, but the treatment is still necessary to start immediately, as in some forms of the disease (as we have seen before) can quickly lead to death.

Treatment of aspergillosis is dependent primarily on the form of its manifestation.

Thus, treatment of aspergillosis ear canal is performed by washings antifungal solutions, such as drilling fluids.

When aspergillosis eyes reduce irritationIt helps lavage of 0.65% sodium chloride solution (very carefully), taking antihistamines preperatov, in severe cases, use of corticosteroid eye suspension. During treatment, the eye should not wear contact lenses and it is necessary to check the intraocular pressure.

Although this is a fungal disease, aspergillosis notIt requires isolation of the patient. On doctor's advice for two to three weeks ill person intravenously administered antifungal drugs such as amphotericin B. ketoconazole and itraconazole - alternative medications that are taken orally (in the form of tablets or capsules) in lesions of deep tissue. Some strains of Aspergillus, however, are stable, and to these drugs.