What is tularemia? What are the symptoms and forms of tularemia? How is the treatment of tularemia? The answers to these questions can be found in the article.

For tularemia characterized by the multiplicity of modes of transmission to man:

The causative agent of tularemia - tularemia bacteria -Gram-negative cocci or rod-shaped cells, small, motionless. They can be stored for a long time in the environment, especially at low temperatures. For a long time it is viable in the corpses of infected animals and remove their skins, water, food. Boiling die quickly.

The causative agent of tularemia enters the body throughskin (not even look damaged), conjunctiva, respiratory tract, gastro-intestinal tract. The method of penetration of the pathogen, its pathogenicity, dose and immunobiological reaction microorganism determine the development of appropriate clinical forms of the disease. At the site of the entrance gate of infection formed primary affect. Following the introduction of the pathogen should be lymphogenous its spread. In lymph nodes there is microbial growth with the development of lymphadenitis. The death of the bacteria is accompanied by the release of endotoxin, which enhances the development of local pathological process, while entering the blood causes intoxication. If the barrier function of lymphatic system is broken, the agent enters the bloodstream (bacteremia occurs) and is distributed throughout the body. There is a generalization (spread CNS) infection with specific lesions of the internal organs and allergy of the body. The diseased internal organs and lymph nodes are formed granulomas specific tularemia.


Symptoms and forms of tularemia

The incubation period is on average 3-7days. The disease begins suddenly, sharply, without prodromal period. There is a fever, the body temperature rises to 38-40 ° C. Develop persistent headache, dizziness, muscle pain, weakness.

The face of the patient hyperemic, edematous. There have vascular injection sclera and conjunctival hyperemia. Language overlaid bloom. On the oral mucosa can be detected petechial hemorrhages. Sometimes there is an erythematous, roseolous or petechial rash. Found lymphadenitis, localization depends on the form of the disease.

There have been relative bradycardia and mild hypertension. Some patients in the 3-5th day of illness appear dry cough, enlargement of the liver, spleen.

In peripheral blood observed leukocytosis with a shift to the left, increasing the ESR.

Bubonic form It occurs when the pathogen penetrates throughskin and is manifested by inflammation of the regional lymph nodes (mostly axillary, femoral, inguinal), where the causative agent is stored. In the lymph node appears distinct morbidity. In the days that the node is markedly increased in size up to 2-10 cm. The inflammatory process involved surrounding the subcutaneous tissue. Over bubo skin is not soldered to it for a long time and maintains a normal color. Evolution buboes different. They can dissolve, fester with fistula formation, and occasionally sclerotic. 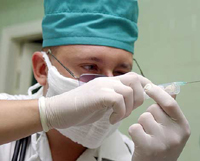 When ulcerative bubonic form tularemia on the place of introduction of the pathogen from the 1st to the 7th day of consistently appearing spot ulcer. Ulcer is covered with a dark crust with a light flaky rim.

Eye-bubonic form develops in contact with the pathogen at theeye mucosa. It is characterized by a pronounced conjunctivitis follicular hyperplasia and erosive and ulcerative changes in the mucous membranes of the affected eye, accompanied by the release of a thick yellowish pus. The general condition of the patients are usually severe, long-term course of the disease.

Anginal-bubonic form of tularemia occur at penetrationpathogens from infected food and water. In addition to the general symptoms observed pain in the throat, difficulty swallowing, throat congestion. The tonsils are enlarged, swollen, grayish-white, with necrotic raids, fused with the surrounding fiber. The deep necrotic lesions significantly disrupt the amygdala and lead to scarring them. Patients appear cervical, parotid, axillary buboes.

When tularemia with a primary lesion of the internal organs, depending on the localization process is isolated abdominal and pulmonary forms.

Abdominal inflammation due tolymph nodes. Along with the symptoms of intoxication arise cramping abdominal pain, nausea, repeated vomiting, anorexia. An objective examination revealed pain in the navel, and often the symptoms of peritoneal irritation. Increased liver and spleen.

pneumonic It develops as a result of air-dust path transmission. In this case, the disease can occur in two ways: bronhiticheskom and pneumonic.

Bronhitichesky option that affectslymph nodes of the chest, accompanied by moderately pronounced signs of intoxication, retrosternal pain, dry cough. In the lungs auscultated dry wheezing. The disease lasts 10-12 days and ends with recovery.

At the height of the disease, many patients haverash, which is located symmetrically in the upper and lower extremities, face, neck, chest. Complications of this form of tularemia include secondary pneumonia, meningitis, meningoencephalitis, an infectious psychosis, myocardial dystrophy, arthritis.


Treatment and prevention of tularemia

In the treatment of tularemia plays a major roleantibacterial drugs. The most effective streptomycin, tetracycline, levomitsin. Treatment is carried out for a long time. When protracted course shows a combination of antibiotics and vaccines.

As a topical treatment applied compresses, heat treatments. According to the testimony produce open festering bubo.

Important events are in the centers of tularemiathe extermination of rodents and vectors of infection. The system measures protivotulyaremiynyh importance takes the protection of water sources, warehouses, grocery stores. The persons involved in work connected with a high risk of infection with tularemia, carried out vaccinations.